Only inventions that are novel qualify for patent protection. Sometimes the novelty of an idea is not readily apparent. Understand where novelty lies so you can identify patentable ideas in your routine engineering work.

This article is based on a chapter of the author’s latest book, First to File: Patents for Today’s Scientist and Engineer, published in 2014 by the AIChE-Wiley imprint.

So, what makes an invention novel? And why do some inventors seem to come up with more novel ideas than others? The key to answering both questions is that novelty is often present where you least expect it.

Novelty can be found in any difference beyond what exists in the prior art. Prior art constitutes all information and documentation that is available to the public in any form, such as published materials, commercial activity, and other patents, that the invention in a patent might be compared to.

The difference may be an adjustment, substitution, variation, expansion, discovery, or solution to a problem, big or small. Even an idea that arises in the performance of everyday tasks or a seemingly minor tweak that an engineer may think of as trivial may, in fact, be novel and therefore a candidate for patenting. Novelty can originate in the laboratory, the shop, the process design department, or the production facility. It can arise in discussions with coworkers, wheth?er in brainstorming sessions or at the coffee machine. Often, novelty emerges in the course of an individual’s daily routine. One of the keys to developing a patent portfolio is, therefore, the ability to recognize novelty.

This article explains where novelty can be found. It gives examples of what patent law recognizes as novelty, as well as what the law considers the absence of novelty, which is referred to as anticipation.

Novelty vs. anticipation: the “all elements in a single reference” rule

In patent law, these inventions are considered to be novel unless all of the components, steps, or functions are disclosed in a single piece of prior art. If they are divided among two or more pieces of prior art, the combination has crossed the novelty threshold and may be patentable. Whether the combination is fully disclosed in a single reference or divided among multiple references, however, may be arguable, as Broadcom Corp.’s Patent No. 6,714,983 (1) illustrates.

The invention is in the field of networks for receiving and transmitting radio frequency communication data between mobile devices (transceivers) and a data processing terminal, or between the mobile devices themselves. Battery-powered, handheld devices such as those used in warehousing or in rental car facilities are examples of such devices.

When this patent was applied for in 1991, there were problems with the existing networks, including their need for large and cumbersome power sources and for customized features to enable a given network to function in a specific application. The Broadcom invention addressed these problems by incorporating two or more communication transceivers and a communication processor in a single module. The communication processor could roam between and communicate with different base stations in the network in a structured manner. This made the module more versatile and also reduced its power requirement.

When Broadcom asserted the patent against a competitor, Qualcomm, Inc., one of Qualcomm’s defenses was that the patent was invalid, since it was anticipated by (i.e., it lacked novelty in view of) the Global System for Mobile communications (GSM) that had previously been developed by the European Telecommunications Standards Institute (ETSI). The GSM is a standard set of protocols for digital cellular networks used by mobile phones.

Although the Broadcom patent did not mention mobile phones, it claimed the invention in terms broad enough to overlap the descriptions of the GSM. Qualcomm contended that the published specifications for the GSM collectively describe a technology that meets the language of the Broadcom patent claim. The protocols are distributed among 11 specifications, each appearing in a separate document, but Qualcomm argued that the specifications are like chapters of a book and function collectively as a single, coherent reference. The court disagreed (2), noting that each specification was authored by a different subset of authors at a different time, and that each stood as a document in its own right. Since no single specification revealed all the elements of the Broadcom claim, the claim was deemed novel.

Incorporation of the missing element by reference. If a missing element is found to be incorporated by reference into a prior art document, the element is considered part of the document even though that document contains no specific mention of that element. This occurred for an invention claimed in an application filed by Schlumberger Technology Corp. (3).Figures 1a and 1b are based on drawings from the application. 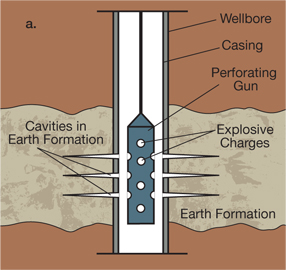 ▲Figure 1a. The process of establishing oil and gas wells involved first lining a wellbore with a casing and cementing the casing in place. The casing was then perforated by lowering a perforating gun into the wellbore and detonating laterally directed explosive charges. This created elongated cavities extending into the surrounding earth formation through which gas or oil could flow toward the casing openings and enter the wellbore. Source: Adapted from (3). 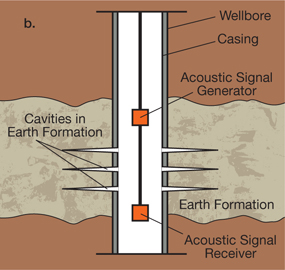 ▲Figure 1b. Schlumberger Technology Corp.’s invention used acoustic waves to determine the depths to which the cavities extended into the formation. Source: Adapted from (3).

In the prior art (Figure 1a), a wellbore was lined with a casing that was cemented in place. The casing was then perforated by lowering a perforating gun into the wellbore and detonating laterally directed explosive charges. This created elongated cavities extending into the surrounding earth formation through which gas or oil could flow toward the casing openings and enter the wellbore.

The invention (Figure 1b) was a system that used acoustic waves to check the effectiveness of the perforating guns by determining the depths to which the cavities extended into the formation. The device generated an acoustic signal inside the wellbore at a depth above the cavity openings and detected the resulting acoustic signal at a second depth, below the cavity openings. The cavities attenuated the signal between the generator and the detector due to the Helmholtz effect, and the degree of attenuation was directly related to the depth of the cavity.

The claims in the Schlumberger patent application called for the use of acoustic transponders that contained piezoelectric transducers for both the signal generator and the detector. The U.S. Patent and Trademark Office (PTO) examiner rejected the claims for lack of novelty over an earlier patent to a Schlumberger competitor, Atlantic Richfield Co., Patent No. 5,218,573 (4), which disclosed the same system but mentioned the acoustic signal generator and detector only in general terms. The Atlantic Richfield patent did, however, state that the transmitter and receiver “may be similar to the type described in my U.S. Pat. No. 4,949,316” (another Atlantic Richfield patent). The earlier (’316) patent, indeed, disclosed piezoelectric transducers — although not for determining cavity depths, but rather for use in logging tools to detect strata and hydrocarbons in subsurface geological formations.

Schlumberger argued that the ’573 patent did not itself disclose the use of piezoelectric transducers. The USPTO, however, found the statement in the ’573 patent to be an incorporation of the ’316 patent by reference — i.e., that it was a clear, detailed citation of what was being incorporated and where it could be found (5). The ’573 patent itself was thus deemed to have disclosed all elements of the Schlumberger claims and thereby anticipated the claims.

Inherent disclosure of the missing element. If an element missing from a prior art document can be deemed to be inherently disclosed in the document, it is considered part of the document. Patent No. 5,059,162 (6) illustrates the distinction between what is and what is not an inherent disclosure. The patent’s novelty was challenged separately based on two prior art references, with opposite results.

The patent claimed a method of hair removal using lasers. At the time of the invention, conventional methods of laser application to human skin tended to cause scarring or other skin damage. The invention solved this problem by using a “careful balance of laser parameters” to destroy the follicular papilla (the germ cells at the base of the hair follicle from which the hair grows) without harming the surrounding tissue. The parameters included a wavelength that was selectively absorbed by the melanin in the papilla, placement of the laser directly over the follicle opening and in alignment with the hair follicle, and light pulses of a limited intensity and duration that caused damage to the papilla but not the surrounding tissue.

The inventor, Nardo Zaias, got the idea while attending an American Academy of Dermatology trade show where Spectrum Medical Technologies, Inc., was an exhibitor. At its booth, Spectrum demonstrated the use of its RD-1200 laser for removing tattoos. Zaias recognized that the same principle could be applied to the melanin in the papilla to permanently destroy the melanin and thereby prevent further hair growth.

Zaias proceeded on his own to study the use of the laser for hair removal, determine the parameters needed for beneficial results, and apply for the patent. The patent cited the Q-switched ruby laser as an appropriate laser to produce light at a wavelength that would destroy melanin; the wavelength was the same as that of the RD-1200 laser that Spectrum had demonstrated at the symposium. Eventually, Spectrum started selling the RD-1200 laser for use in hair removal, and when it did, Zaias and his exclusive licensee, Mehl/Biophile International Corp., sued Spectrum for patent infringement.

Spectrum raised two defenses to the lawsuit, each challenging the validity of the patent for lack of novelty. One was Spectrum’s own manual for tattoo removal using the RD-1200 laser that it had showed Zaias at the trade show. The other was an article published by another researcher in the field, Luigi Polla, entitled “Melanosomes Are a Primary Target of Q-switched Ruby Laser Irradiation in Guinea Pig Skin,” which was directed to the selective destruction of pigmented cells by lasers, and particularly to laser therapy for pigmented cutaneous lesions. One of these defenses succeeded, but the other did not...

Many factors must be evaluated when developing a liquid-liquid extraction process. Here are some of the important parameters to consider as you go from laboratory testing to commercial-scale operation.

Every substance can be toxic, depending on the dose and frequency of exposure. This article outlines the basics of toxicology and explores where the research in this field is heading.

Only inventions that are novel qualify for patent protection. Sometimes the novelty of an idea is not readily apparent. Understand where novelty lies so you can identify patentable ideas in your routine engineering work.

The Malaysian Chemicals Industry: From Commodities to Manufacturing

A wealth of natural resources is an advantage for Malaysia’s chemicals industry. Since it became independent in the mid-20th century, the country has evolved from a commodities-based economy into a technology and engineering hub

Editorial: What’s On Your Desk?

This is an expanded version of the Editorial that appeared in the print version of Chemical Engineering Progress, November 2015. ...

One morning in July 2009, at a plant in South Carolina, a truck of anhydrous ammonia was unloaded into a storage tank using a hose stored on the truck trailer. Shortly after the transfer started, the unloading hose ruptured and released a cloud of toxic ammonia gas. The cloud traveled across a...

YPOV: A New Norm for the PhD Workforce?