Profile: An App that Saves Lives, With a ChE at the Helm | AIChE
Skip to main content

Profile: An App that Saves Lives, With a ChE at the Helm 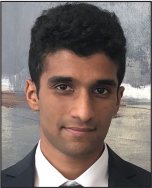 In his youth, Vedant Pradeep was a self-described hyperactive child. Born in India, he moved to the United Arab Emirates with his mother, a doctor, and his father, an engineer, when he was six years old.

From a young age, Pradeep had an insatiable curiosity and a deep desire to make a difference. He dreamed of being a genetic engineer, inspired by Marvel comics such as Spiderman, and devoured general knowledge sources such as the Encyclopedia Britannica.

Today, Pradeep is a chemical engineer by training and the cofounder of Reframe, a mobile application that helps users overcome addictions such as alcoholism. The story of Reframe begins at the Georgia Institute of Technology, where Pradeep met his fellow cofounder Ziyi Gao, in an introductory chemical engineering class. The two shared a similar vision of being at the forefront of an industry, of saving not just one life at a time through medicine, for example, but millions of lives. Both agreed that the path to this goal was through technology and engineering.

Pradeep is an energetic, bluntly honest individual. Despite his success, he is remarkably humble and self-deprecating, and relatable in his journey of finding his purpose. “In the beginning of my...

A Wave of Progress for Process Intensification

Continuous Manufacturing in the Pharmaceutical Industry

Dream or Reality? Electrification of the Chemical Process Industries

Electricity could be the key to the next industrial revolution.

Achieve the Benefits of Intensification through Process Control

A New Approach to Industrial Innovation

Process intensification (PI) has not fulfilled its promise of transforming the chemical process industries. A new approach to innovation is needed to ensure successful development and implementation of intensified projects.

This special section examines several concepts that will be critical to intensifying the chemical process industries (CPI), including modularization, continuous processing, electrification, process control, and innovation.

Although the wind and sun are free, converting these resources to useful power costs money. Renewable power needs to be deployed for CO2 mitigation where it can be used most efficiently and have the greatest benefit.

Once-through reboilers can offer greater thermal and separation efficiencies than conventional circulating-thermosiphon reboilers, but are subject to different modes of failure.

I love French cuisine because creating an astounding dish like beef bourguignon requires only basic ingredients, brought together by patience and technique. The same approach can be applied to building a successful company.

The National Science Foundation (NSF) Center for Bioanalytical Metrology (CBM) is working to address the challenge of point-of-care antibody analysis.

This month’s Special Section on Process Intensification gives you a look into the many projects being driven by the RAPID Manufacturing Institute.

Profile: An App that Saves Lives, With a ChE at the Helm

Vedant Pradeep is a chemical engineer by training and the cofounder of Reframe, a mobile application that helps users overcome addictions such as alcoholism.

On April 12, 2004, a plant in Dalton, GA, attempted a first production batch of triallyl cyanurate. A runaway reaction occurred, which released the flammable and toxic chemicals allyl alcohol and allyl chloride to the atmosphere.

Practicing chemical engineers, safety professionals, and industry leaders worldwide will gather online to advance the vital work of the profession when AIChE and its Center for Chemical Process Safety (CCPS) host the 2021 AIChE Virtual Spring Meeting and 17th Global Congress on Process Safety as an...

Molecular simulation uses information about molecular interactions to predict the molecular structure and properties (in particular, thermodynamic and transport) of systems.