Process Safety Beacon: Not All Vibrations Are “Good Vibrations”

Some equipment such as vibratory conveyors and screens are intended to move, but in most other equipment, vibration is not desirable. It can cause piping and equipment damage, including premature failure.

In one incident, a new compressor system was starting operation (Image 1a). The pressure gauge connection was modified during a temporary troubleshooting procedure by attaching a longer pipe than the original (Image 1b). After troubleshooting, the longer pipe was left in place and the pressure gauge was reattached to it. Vibrations from the compressor were magnified by the longer pipe, and the amount of movement in the system increased. The connection failed, releasing a large volume of flammable vapors (Image 1c). Fortunately, the vapors did not ignite, but they did cause a significant environmental release. 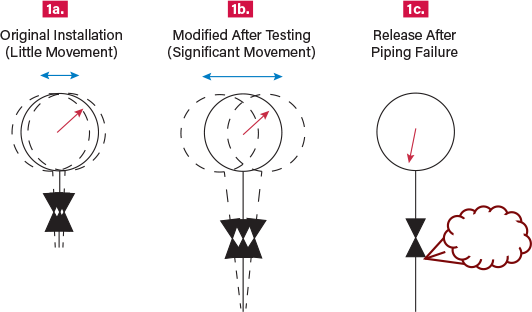 ▲ A newly operating compressor system had a pressure gauge connection that moved slightly (Image 1a). A longer pipe was installed for a troubleshooting procedure and left in place afterwards — this increased the connection’s movement (Image 1b). The connection later failed, releasing flammable vapors (Image 1c).

In another incident, during a routine walk-around, an operator noticed a pipe that was moving approximately 1 in. (2.5 cm). He noted that the movement occurred when the rotor on a wiped-film evaporator was out of balance. The imbalance forced the facility to reduce production by 50% to meet quality limits. After repairing the main bearings and the evaporator rotor, the movement stopped and the production rate returned to normal.

Vibration is the process telling you something is wrong, so listen to it!

©AIChE 2020. All rights reserved. Reproduction for non-commercial, educational purposes is encouraged. However, reproduction for any commercial purpose without express written consent of AIChE is strictly prohibited. Contact us at ccps_beacon@aiche.org or 646-495-1371.

Waste Plastic: Challenges and Opportunities for the Chemical Industry

Despite plastic’s many benefits, the ever-increasing mass of unmanaged plastic waste is causing significant damage to the global ecosystem. A few key regulations, as well as recycling technologies, are helping to curb the threat.

Use Dynamic Analysis to Determine Time to Consequence

Time to consequence (TTC) is the time between initiation of the safety system by a failure and the moment the hazardous consequence occurs. Dynamic simulations can help to determine TTC and ensure safety systems are adequate.

Despite great advances in process simulation, the need remains for real-life distillation testing. This practical guide gives a broad overview of how to set up experimental distillation projects.

Steam vs. Electric Heating — The Basics

Consider process requirements and plant operating goals to determine the optimal heating source for your facility.