As modern medicine becomes more personalized and less centralized, the need for scalable and tunable platforms for next-generation point-of-care biosensors remains an ongoing research objective. One promising technology for point-of-care analysis is electrochemical sensors, which are portable, ultrasensitive, and inexpensive. Electrochemical sensors are compatible with integrated circuit technology, enabling integration of sensors with the necessary electronic circuitry for data acquisition, processing, and transfer.

Two-dimensional (2D) materials, such as graphene, transition-metal dichalcogenides (TMDs), and their heterostructures, are viable candidates for fabricating electrochemical biosensors due to their tunable electronic properties and the abundance of functionalization strategies. Recent progress in low-temperature and low-cost synthesis of 2D materials through electrodeposition could allow such biosensors to be printed at high throughput on flexible substrates for integration in wearable technologies. 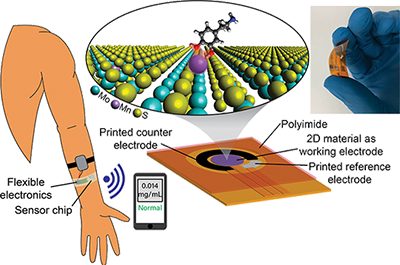 ▲ Researchers are developing biosensors by engineering low-cost 2D materials for sensitive and selective detection and monitoring of various biomarkers. The sensors will be integrated with portable electronic readout circuitry for remote health management.

The researchers are modifying 2D materials via various physical and chemical routes to tune and improve the electrochemical response to target biomolecules, such as dopamine. Dopamine is an important neurotransmitter whose abnormal levels can be indicative of various neurological disorders, including Parkinson’s disease, Alzheimer’s disease, and schizophrenia.

In another collaboration between Air Force Research Laboratory (an ATOMIC industry member) and PSU, researchers investigated 2D material inks and their modification as a facile route for biosensor development. For example, they showed that by tuning thickness and morphology of graphene ink and its treatment under a specific low-temperature annealing condition, detection of dopamine down to a few picomolar can be achieved — the lowest reported concentration for sensors based solely on graphene.

Beyond tuning the surface properties, the researchers also showed that the response of electrochemical biosensors can be tuned based on the substrate. For example, they showed that sensitivity of iron sulfide-graphene heterostructures to reduction of hydrogen peroxide (an important small molecule involved in cell signaling and oxidative stress) depends on the underlying graphene’s doping type and level. The substrate properties affect the interface impedance and charge-transfer kinetics, which impact the sensor’s sensitivity.

Within the next five years, the ATOMIC researchers envision developing and expanding a variety of specific biosensors into a fully packaged sensory platform prototype. This platform would interface with a smartphone for remote control.

The research center’s long-term goal is to commercialize such a platform. Therefore, the researchers plan to seek direct input from key industrial partners on various aspects such as scalability, processing routes, and product design. Through this multipronged effort enabled by collaborations between university researchers and industrial R&D teams, the engineered sensors and integrated system can advance low-cost diagnostic technologies for applications ranging from wearable sensor arrays for human stress monitoring to smart cell-culture plates for high-throughput in vitro screening of drugs.

This technology was funded through the NSF Industry-University Cooperative Research Centers (IUCRC) Program.

Waste Plastic: Challenges and Opportunities for the Chemical Industry

Despite plastic’s many benefits, the ever-increasing mass of unmanaged plastic waste is causing significant damage to the global ecosystem. A few key regulations, as well as recycling technologies, are helping to curb the threat.

Use Dynamic Analysis to Determine Time to Consequence

Time to consequence (TTC) is the time between initiation of the safety system by a failure and the moment the hazardous consequence occurs. Dynamic simulations can help to determine TTC and ensure safety systems are adequate.

Despite great advances in process simulation, the need remains for real-life distillation testing. This practical guide gives a broad overview of how to set up experimental distillation projects.

Steam vs. Electric Heating — The Basics

Consider process requirements and plant operating goals to determine the optimal heating source for your facility.

Explore our selection of new books for November 2020.

Researchers are developing biosensors by engineering low-cost 2D materials for sensitive and selective detection and monitoring of various biomarkers.

Editorial: We Can’t Worm Our Way Out of This

Last month, I wrote about the fingerprint-like uniqueness of the gut microbiome and an episode of the TV series Scorpion in which one character’s gut flora saved the day.

Federal, state, and company COVID-19 guidelines have changed the way we do business, establishing a new normal for our professional lives. Many of us may be working in isolation or in smaller cohorts. P

The Perspective article proposes building the reactor model first — before any pilot-plant experimentation — using first-principles calculations rather than experimental fitting to determine the unknown rate parameters.

Process Safety Beacon: Not All Vibrations Are “Good Vibrations”

Some equipment such as vibratory conveyors and screens are intended to move, but in most other equipment, vibration is not desirable.