Distillation is considered by many to be a mature technology. As a result, large research institutes overlook its funding, and little research is done to advance the field. But, what does it mean for a technology to be mature?

Distillation is a mass-transfer process, regulated by thermodynamics, and subject to the laws of physics. While we understand the fundamentals of the operation, even after several decades of research, descriptive models of distillation that are exclusively based on first principles (without empirical fits) are not available. We still largely rely on testing and empirical observations to develop and describe distillation. And, we do not know what development may be around the next corner. Even small developments can result in large economic and sustainability improvements, as distillation is prevalent in the chemical process industries (CPI) globally.

Defining a technology as mature should not be based on an understanding of the principles that govern its operation. A technology’s maturity should be based on how much further progress can be made and what remains to be learned. Distillation, by this definition, is not mature and still has plenty of room to advance.

In the past three decades, distillation has advanced in:

Table 1 provides some specific examples of advancements in the past decade or so that have had a significant economic impact. Most of these have been enabled by research and development (R&D) supported by industry, either internally or through research consortia.

Innovations in related fields such as fluid flow have also played a role in advancing distillation. For example, computational fluid dynamics (CFD) is now used extensively to design and troubleshoot distillation columns.

The need for continued innovation in the field is palpable. Even small improvements in distillation capacity, efficiency, availability, and cost will have a major impact. While innovations in the field have continued, the pace could stand to increase via more academic and government support. This article discusses distillation advancements and looks to new avenues to further develop the technology. 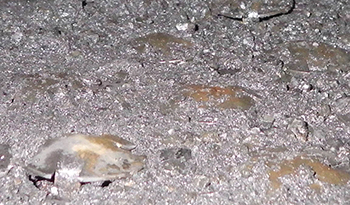 Electrolyte thermodynamic and vapor-liquid-solid equilibria data and models have been used to describe fouling and corrosion in distillation systems (Figure 1). These models can be combined with conventional process simulators to determine the dew point and acidity of the first liquid droplets produced on metal surfaces of columns. These initial droplets are the most corrosive, and these models can predict their occurrence and concentration to help prevent corrosion and fouling.

Market competition has driven the continuous improvement of tray technology. Innovations are available from various equipment and technology suppliers that offer different versions of: 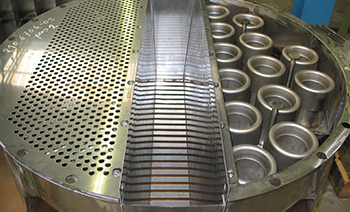 ▲Figure 2. The Shell ConSep tray is a centrifugally aided, high-capacity tray that is used mainly in tower retrofits. Photo courtesy of Shell.

These improvements offer better performance at a reasonable cost without requiring complex fabrication. For example, truncated-downcomer trays increase vapor capacity because they provide more useable bubbling area. And, fouling-resistant designs keep distillation columns in service longer. Figure 2 is a centrifugally aided, high-capacity tray that is used in many retrofits. This tray employs centrifugal separators in the bubbling area to remove capacity limits caused by liquid entrainment (or jet flood).

One of the most important realizations of the past 30 years is the massive effect that liquid and vapor distribution (or maldistribution) can have on the performance of packed distillation towers. Packings work in conjunction with distributors to evenly distribute liquid and vapor throughout the column. Much of the knowledge about liquid distribution is empirical, but there is room for more fundamental understanding of: 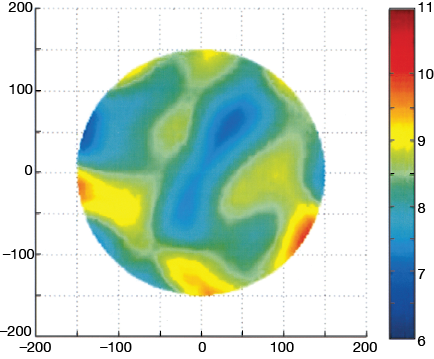 ▲Figure 3. ThruVision is a technique that provides a two-dimensional density profile of a cross-section of a tower that can be used to assess liquid distribution in packed sections. The horizontal axis shows the departure from the center of the column, and the vertical axis shows radiation intensity received by the detector, which correlates directly with density. Figure courtesy of Tracerco.

Tools have been developed to assess the quality of phase distribution in a column in real time. Figure 3 presents the results of a gamma scan taken during column operation. Gamma scans map the density of the system at any given point to provide a snapshot of the amount of liquid and gas present in the voids. 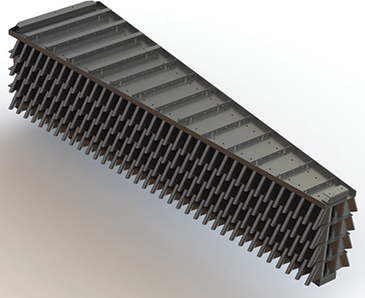 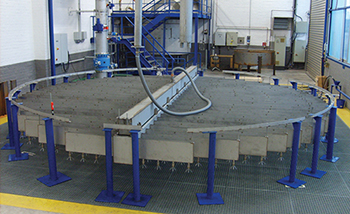 Rate-based models are used to describe distillation processes. Their widespread use creates opportunities to include more-fundamental and generalized mass-transfer and hydraulic models in simulations. This approach will create simulations that allow better interpolations and extrapolations from data for designing or analyzing systems. The rate-based approach lends itself to the use of less-empirical and more-general models to describe hardware performance.

This approach is of particular value in the area of chemically enhanced absorption, in which proper management of chemistry, hydraulics, and mass-transfer concepts makes solvents for reactive gases more effective. Models that effectively describe variables such as the physical chemistry of a system, liquid residence time, and interfacial area help to produce better designs. The current interest in carbon dioxide removal technologies will benefit from, and be of benefit to, advances in distillation technology; the more-rigorous models and efficient hardware developed for carbon capture will find a direct application in distillation.

The performance of distillation systems is inextricably linked to the performance of associated heat-transfer equipment, such as reboilers and condensers. Research into shell-and-tube heat exchangers has helped to increase heat flux, enabling older units to be retrofitted with new tubes that increase performance with less capital expenditure. 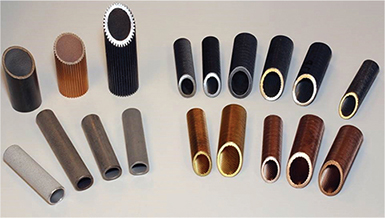 ▲Figure 7. Enhancements to the design and texturing of reboiler and condenser tubes (HighFlux or HighCond) significantly improve heat-transfer rates by reducing the resistance on the convective side and improving the management of surface temperatures. Photo courtesy of UOP. 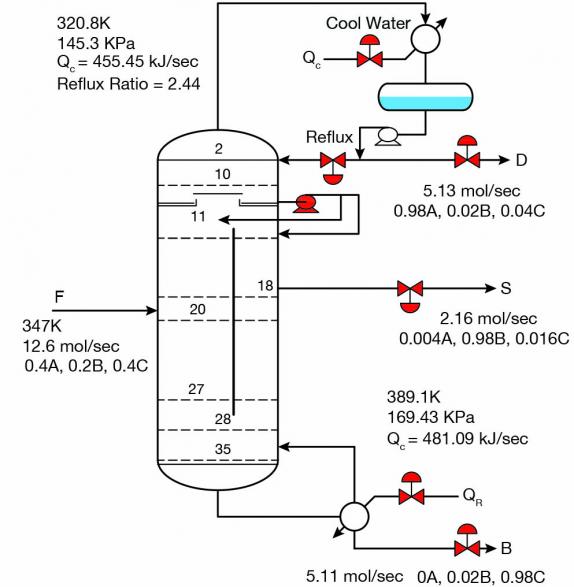 ▲Figure 8. A dividing-wall column (DWC) is a self-heat-integrated column that saves energy and capital, and is ideal for three-component separations. This DWC is used to separate C5s, C6s, and C7s.

The actual configuration of a distillation column affects its efficiency and impacts its size and capital requirements. Configurations that integrate the traditional function of two distillation columns in series into one single shell can offer savings in capital and energy, such as dividing-wall columns (DWCs) (Figure 8).

While distillation has come a long way, the field needs to continue to advance. Progress would be welcome in areas such as modeling and simulation, improved reliability, improved capacity and efficiency, diagnostic tools, and hybrid processes that combine distillation with other separation techniques.

However, undoubtedly there will be advances in the field that we do not see coming. This is particularly true in the area of diagnostics and data acquisition and use. Our abilities in these areas are growing rapidly and their application to distillation is yet to be fully realized.

Distillation processes could play a significant role in carbon dioxide management, enabling separation and concentration of CO2 for sequestration and reuse.

Where the carbon dioxide content in natural gas is above 20%, distillation could be used to cryogenically separate CO2 from H2S and natural gas. In these cases, the traditional amine sweetening process becomes very large and expensive. A hybrid process that combines cryogenic distillation with CO2 freezing could lower capital requirements. A combination of distillation and membrane permeation may also prove to be cost-effective in these applications.

Another area prime for development is distillation at higher forces of gravity, such as cyclonic centrifugal action, which provides intimate contact between vapor and liquid but also aids in their subsequent disengagement. While there has been progress in this area, improved management of entrainment could help to push the fairly new field forward. This area requires further development of tools like CFD models and the actual hardware.

Other distillation configurations and hardware concepts have proven useful in the lab, but encounter significant hurdles at larger scales, including short-path distillation for heat-sensitive materials and microchannel distillation for performance improvement at close to minimum reflux.

Distillation is extremely effective at large scales, so displacing it from industrial use is rarely a successful economic endeavor. Nevertheless, alternatives to distillation exist in some instances, even at larger and medium scales, such as the use of adsorption processes for medium-scale gas separations and reverse osmosis membranes for water purification.

The focus in chemical engineering education has steadily drifted away from traditional process engineering toward materials, bioengineering, drug delivery, nanotechnology, and other areas of interest. Due to government funding in these latter areas, chemical engineering educators have little professional exposure to traditional process engineering. While these new areas of research are exciting and promising, the oil and gas and chemical industries still need capable people to help reach industry goals, including those related to sustainability efforts.

Academic research could play a big role in advancing distillation technologies. Three areas of interest might be:

The field of distillation could take a cue from the effective knowledge management of safety professionals in the CPI. On the one hand, the field has made progress, implementing new technologies effectively and continuously improving distillation design. But, on the other hand, the field continues to make the same mistakes over and over again in regard to design, installation, and operation. Many have made brilliant careers troubleshooting distillation problems, and they will tell you firsthand that most failures are ones that they continue to see.

For example, during the startup of refineries, it is common for water to inadvertently spill into a column containing hot hydrocarbons and create a violent rush of steam that damages internals. Poorly designed inlets for two-phase flow, improperly managed liquid levels, and other issues continue to plague the industry. Solving these recalcitrant problems is a matter of training, but organizations need to become learning organizations with effective knowledge management.

Opportunities to energize the R&D aspects of distillation in process engineering are plentiful, only requiring the attention of academia and industry to help realize the potential. Professionals and academics already working in this focus area should lead the charge to help secure funding for distillation R&D.