This article is based on a presentation at the AIChE Spring Meeting, San Antonio, TX (March 2017).

Pilot plant testing is an integral part of designing a liquid-liquid extraction (LLE) column. Performing pilot plant testing with actual feed liquid, and then relying on known scale-up correlations to size the column, is one of the best and most reliable methods of determining the specific extraction column best suited for an application (1). In general, the design process consists of the following steps (2):

For those reasons, it is important to implement an optimized pilot plant testing method that can be completed in a short time frame using minimal amounts of feed and solvent. For basic research and development (R&D) work, experimental design is a well-proven and accurate method for process optimization. However, for pilot plant testing, experimental design requires significant amounts of feed and solvent and can take a long time.

This article presents a step-by-step method for pilot plant testing that saves both time and material. This method does require some experience, but when it is applied correctly, it can ensure that an extraction column is optimally designed and performs as required.

Laboratory work prior to pilot testing

Before pilot plant testing, the first step in developing an extraction process is selecting the solvent and generating equilibrium data (e.g., distribution coefficient vs. solute concentration). You can do this in several ways, one of which is outlined in Ref. 3.

In addition to obtaining raw equilibrium data, it is just as important to observe the phase behavior of the system, especially for selecting the right type of column for scaleup and developing a test plan for that column. When lab-testing the extraction process, gather the following pieces of data: 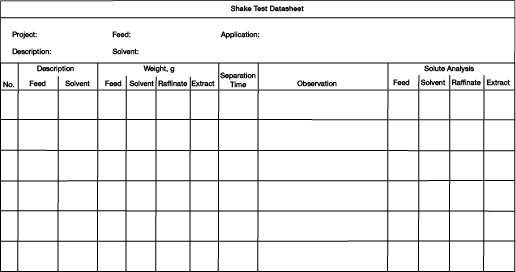 ▲Figure 1. When performing lab tests for an extraction process, use a datasheet such as this to record liquid-liquid equilibrium data for each test.

A typical datasheet for generating liquid-liquid equilibrium data is shown in Figure 1. For each mix-decant cycle, the datasheet will provide the material balance, the solute concentration in both phases, and the observation of the phase behavior. These data will help you select the best extraction column for the process and serve as the starting point for pilot plant testing. 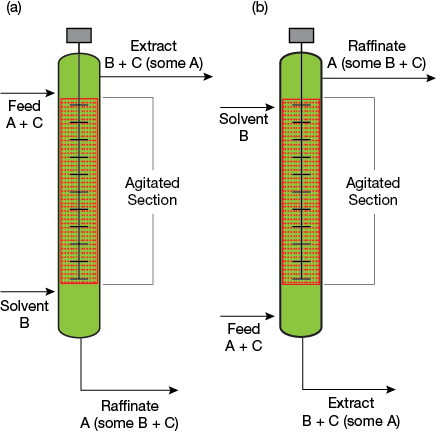 This section presents the optimized method for pilot plant testing an agitated extraction column (Figure 2). Following this section, two examples illustrate how to use the method.

This method requires fairly quick analysis of the samples generated in the pilot column. The solute concentration in the raffinate is typically the key indicator of the column’s performance. It is also highly desirable to perform the test in a glass-shell extraction column so that the operators can observe the phase behavior and tweak the column operating conditions accordingly. The procedure is as follows:

Aluminum (Al) possesses many desirable properties: a high strength-to-weight ratio, corrosion resistance, thermal conductivity, and ductility. Over the past five decades, Al and its alloys have been used extensively for automotive, construction, electrical, and chemical applications. The growing...

The widespread adoption of lithium ion batteries for energy storage has driven a steep increase in the demand for lithium. As a result, lithium prices have surged, while lithium reserves have declined.

Leadership Q&A: Strengthening the Engineering Profession of the Future

Meet Bhavesh V. (Bob) Patel of LyondellBasell and Jack Futcher of Bechtel discussing leadership in advancing possibilities for the next generation of engineers.

Spotlight on Safety: Vulnerability is Key to Safety

Epigenetics — the study of how our actions and experiences mark or modify our DNA — can explain some unusual genetic findings.