Foodborne pathogen outbreaks can be prevented by limiting the number of microbes that attach to produce surfaces. This article explains the interactions between bacterial cells and produce surfaces and the mechanisms of pathogen attachment and detachment.

For many years, foodborne pathogen outbreaks were commonly associated with ground beef, poultry products, meat, eggs, dairy products, and soft cheeses (i.e., mainly with animal products). In the past few decades, though, there has been an increase in the prevalence of outbreaks of human pathogens in fresh fruits and vegetables. According to the U.S. Centers for Disease Control and Prevention (CDC) 2014 Annual Report, there were more than 35 major outbreaks related to fresh produce in 2014, which caused a total of 1,975 cases of reported illness. In the U.S., seeded vegetables were the cause of most of the illnesses; cucumbers or tomatoes sickened 428 people. In January 2013, the CDC reported that nearly half of all foodborne illnesses in the U.S. were caused by contaminated produce.

Produce and outbreaks: A new challenge in food safety

Consumers are more health-conscious and prefer a diet rich in fresh fruits and vegetables. Higher demand has spurred an increase in the production of fresh produce as well as an increase in the number of large fresh-cut produce processing and packaging facilities. These large facilities supply produce nationwide, which increases the possibility that more consumers will be exposed to contaminated produce from a single source. Higher demand has also increased imports of fresh produce from all over the world, including places where the possibility of contamination may be high (1, 3).

Outbreaks of foodborne illness caused by contaminated produce can have severe health effects on young children, the elderly, and the immune-compromised population. Fruits and vegetables are often consumed without any processing or kill step to inactivate harmful pathogenic microorganisms, if present. Therefore, ensuring the safety of these products via washing or sanitizing is of prime interest.

Contamination of produce with human pathogens may occur prior to harvest, or during washing (if sanitation conditions are suboptimal), conveying, handling, fresh-cut processing, packaging, or transportation. Attachment and survival of human pathogens on produce — both before and after harvest — depend on a variety of factors, such as the type of microorganism, the characteristics of the produce, the attachment site, environmental factors such as temperature, humidity, and nutrient availability, among other factors (2).

Many bacteria, viruses, and parasites have been linked to outbreaks of illness associated with fresh produce. Those generally associated with produce contamination are enteric, i.e., they are found in the gastrointestinal tract of animals (2–4). Some examples of such enteric pathogens include: Salmonella spp., E. coli O157:H7, C. jejuni, S. enterica, Lis teria monocytogenes, Shigella spp., Campylobacter spp., Yersinia spp., and Staphylococcus aureus(1, 4).

How do bacteria attach?

Bacteria can exist in two different states — the planktonic state, i.e., freely floating in bulk solution, and the sessile state, i.e., adhered to a surface as a unit (5, 6). In an aqueous solution, nutrients have a tendency to accumulate on solid surfaces, thus giving adhered bacteria an advantage over free-floating, planktonic bacteria. According to Busscher and van der Mei (5), adhesion to a surface is simply a mechanism for survival of the bacteria, so they prefer the sessile state over the planktonic state. When bacteria attach firmly and multiply on a surface, they can form a biofilm. 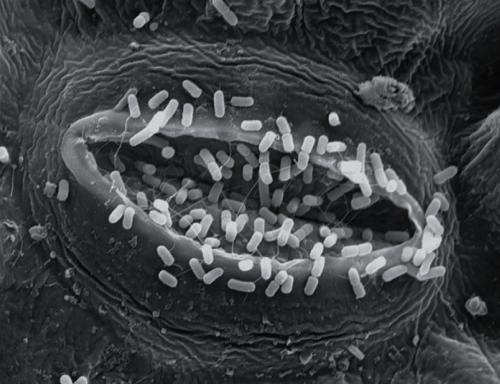 All above-ground parts of a plant are covered with a cuticle layer, which is made up of waxy hydrophobic material that prevents infiltration of microorganisms (3). Gaps in the cuticle layer or a damaged cuticle layer can expose hydrophilic tissue, allowing nutrients to accumulate and harbor pathogens (1, 3). E. coli cells bound to a leaf stomata (an opening in the cuticle layer) are shown in Figure 2(8).

Human pathogens can also attach to the underground parts of plants, such as damaged roots; from there, they can be internalized and reach other parts of the plant. Due to harsh weather conditions, exposure to ultraviolet (UV) light, and limited nutrients, human pathogens are believed to survive and contaminate at higher levels post-harvest than prior to harvest (3).

One strategy enteric bacteria use to survive on a plant is to form a biofilm on the leaves, stems, roots, or intracellular spaces of plant tissue (9). A biofilm protects the bacteria from harsh environmental conditions, UV radiation, indigenous microorganisms, and antimicrobial agents generated by plants. Bacteria embedded in the biofilms on a plant surface are more resistant to desiccation, removal, or inactivation by sanitizers (9).

▲Figure 3. In the first stage of biofilm formation, bacteria must attach to a surface. Next, the cells form a monolayer on the surface and begin to multiply, eventually developing into a mature biofilm. Nonadherent cells can detach from the biofilm and contaminate other surfaces. Source: Adapted from (10).

Biofilm formation involves many stages, the first of which is the attachment of a cell to a surface (Figure 3) (10). Attachment may take place with the help of physicochemical forces, extracellular proteins, and/or cell appendages. After attaching to the surface and forming a monolayer, the bacteria start to multiply and produce biofilm matrix (slime), which consists of proteinaceous materials and exo-polysaccharides (9, 10).

Upon maturation of the biofilm, nonadherent cells (or daughter cells) may escape from the slime and contaminate other surfaces (10). Bacterial attachment can take less than a few seconds, and biofilm formation may take place over a few hours to a few days.

How do bacteria detach?

Modular plants offer many benefits over a conventional stick-built facility. Read about the pros and cons of the modular approach to help you decide if it makes sense for your project.

Foodborne pathogen outbreaks can be prevented by limiting the number of microbes that attach to produce surfaces. This article explains the interactions between bacterial cells and produce surfaces and the mechanisms of pathogen attachment and detachment.

Compressing air is an inefficient and expensive process. This article offers some tactics to optimize your compressed air system, which can help reduce energy costs at your plant.

Smart valve positioners offer a range of diagnostics, but the volume of information they can provide can be daunting. Establish a program to deal with alerts and analyze data to help you benefit from the information without getting overwhelmed.