Globally, 1.23 trillion bricks per year are fired in kilns at high temperature (900–1,100°C), emitting over 800 million m.t./yr of carbon dioxide. Additionally, the cement industry accounts for approximately 5% of global carbon dioxide emissions. Thus, the $28-billion U.S. masonry manufacturing industry is ripe for innovations to dramatically lower its carbon footprint. Thanks to grants from the National Science Foundation (NSF), one such eco-friendly innovation is steadily making progress toward commercialization.

bioMASON, a start-up located in Research Triangle Park, NC, has developed a process for “growing” bricks at room temperature rather than firing them in kilns. The process employs bacteria to grow the building materials without emitting greenhouse gases, and without depleting nonrenewable resources.

The idea for growing bricks was inspired by a study of coral structure, which is a hard cement-like material created by nature at ambient sea temperatures with low energy and minimal material inputs. bioMASON has used biochemistry to do in days what takes a geological process millennia. The company has subsequently improved the process, reducing costs and scaling up to introduce a competitive building material into the marketplace.

Here’s how the process works: Loose aggregates (e.g., mine tailings, sand, crushed rock) are placed into a mold and then inoculated with a specific strain of Sporosarcina pasteurii, a nonpathogenic soil bacterium. Next, nutrients, urea, and a source of calcium ions are added to the mold. The nutrients promote the bacteria to hydrolyze urea and produce carbonate ions, which react with calcium ions, causing calcium carbonate (i.e., biocement) to precipitate on the surfaces of the aggregate particles. As the bacteria continue to churn out carbonate ions, more and more calcium carbonate is made, which creates structural bonds between the particles. This growing process produces construction materials that are cost-competitive with traditional Portland cement and clay-based masonry, are cleaner to manufacture, exceed structural performance requirements of the industry, and can be made with a wide range of aesthetics — in less than three days.

The company currently has designs for pilot production systems for batch and continuous manufacturing that are capable of producing more than 1,000 pallets (about 21 bricks/pallet) of material per week. 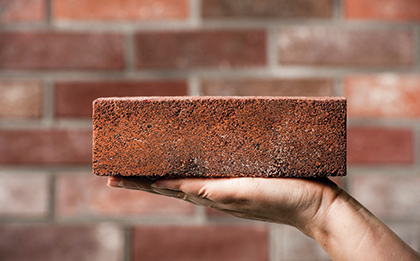 ▲ bioMASON has developed a green process for growing bricks without the high temperatures typically used to fire bricks in kilns. At the core of the process are microbes that produce carbonate ions. The carbonate ions react with calcium ions to form calcium carbonate, which precipitates as biocement.

Moving forward, bioMASON plans to partner with existing material manufacturers by licensing the technology, selling its modular production systems for manufacturing the bricks, and providing critical biological and nutrient components to them. Manufacturers can use the bioMASON technology and equipment to produce bricks on-site in its mobile production units, similar to mini cement production plants used for large building projects, and utilizing local construction aggregates as raw material.

The company says it is continuing to focus on rigorous material testing, cost-optimization at the production scale, and the in-house production of its biological components. In addition to traditional bricks, bioMASON has also developed the technology to produce various building products, including bricks for light-traffic paving, thin veneer, interior tiles, exterior façade panels, and solid surfacing (e.g., countertops).

Are you working in the right industry to make the most out of your chemical engineering degree? Ever wonder if other chemical engineers with the same experience level get paid more than you? Check out the results of AIChE’s biennial salary survey to find out which industry pays the most, how your...

This is an expanded version of an article that appeared in the June 2017 issue of Chemical Engineering Progress.

Industrial Cybersecurity: How Much Is Enough?

To answer that question, first summarize potential attack scenarios in a matrix. Then identify which combinations of attacks, consequences, and risks require mitigation and which you are willing to accept.

Incorporate Cybersecurity into Your PSM Program

Here are some prevention and mitigation strategies for three common types of industrial incidents — a network breach, an insider attack, and infection via a portable device — and recommendations for incorporating industrial cybersecurity into an existing process safety management (PSM) program.

Improve Your Spreadsheet Productivity with VBA

Excel includes a programming language that can improve your productivity, as well as the reliability of your spreadsheets. Simple programs in Visual Basic for Applications (VBA) can have a big impact on your work for little effort.

Select the optimal hammer mill or jet mill for your application by characterizing the feed material and conducting milling tests.