▲Figure 1. This is a typical reverse osmosis (RO) schematic. Biocides or other biofouling preventive measures are added to the feedwater during pretreatment. 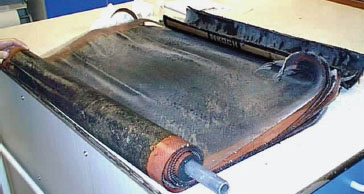 ▲Figure 2. This membrane is covered with a black biofoulant.

The bane of existence for users of reverse osmosis (RO) membrane systems (Figure 1) is controlling membrane fouling from microorganisms. Autopsies of 150 membranes found that all of the membranes had some degree of membrane biofouling (Figure 2) (1). Forty-nine had microbial colony densities greater than 105 CFU/cm2, which was the direct cause of the membranes’ performance decline. Biofouling was a contributing factor to the performance decline of the other 101 systems.

Biofouling is the irreversible adhesion on a membrane of microorganisms and the extracellular polymers (ECPs, i.e., biofilm) that they produce. The process of adhesion involves three steps (2): 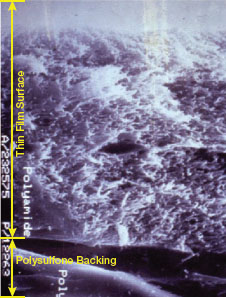 Properties of membranes that favor adhesion and biofilm formation include:

▲Figure 4. Because there is no convection in the concentration polarization layer on the surface of a membrane, dissolved nutrients and suspended solids can build up and promote bacterial growth.

Biofilm adhesion is also promoted by dissolved nutrients in the laminar boundary layer next to the membrane, which is called the concentration polarization layer (3). Because no convection occurs at the membrane surface, dissolved and suspended solids, including nutrients, build up (Figure 4).

Once a biofilm forms, it protects the underlying bacteria from disinfecting chemicals and flow shear forces that could disrupt the film.

Aerobic bacteria in seawater, brackish water, and wastewater systems, and anaerobic bacteria (e.g., iron- and sulfate-reducing bacteria) in wells, can all cause membrane biofouling. Reverse osmosis membranes used in recycle/reuse processes are exposed to an even broader range of microbes, including aerobic, anoxic, and anaerobic species.

The presence of biofouling can be indicated by (4):

The objectives of biofouling treatment methods are to kill the microbes; remove microbes and dead microbial bodies (which can become food for new growth); prevent adhesion, propagation, and biofilm maturation; and remove nutrients that foster microbial growth. Techniques to accomplish these objectives include:

Techniques to modify membrane properties, such as roughness, charge, or hydrophilicity, include coating the membrane and using a membrane made of a different polymer to minimize bacterial adhesion. Antimicrobial nanoparticles, such as silver, titanium dioxide, and carbon nanotubes, incorporated into membranes can help to limit adhesion.

Physical disinfection techniques include ultraviolet (UV) radiation, membrane filtration (microfiltration [MF] and ultrafiltration [UF]), and sand filtration. These techniques either modify the bacterium itself to hinder reproduction (UV) or remove bacteria according to particle size (MF, UF, and sand filtration). These methods, however, can be capital-intensive and do little to address biofilm once it has formed.

Other physical approaches are not yet commercialized, including electrochemical, ultrasonic, and thermosonication techniques.

During electrochemical treatment, a microbial suspension passes between two electrodes, which subject the bacteria to a pulsed electric field. The field disrupts the cell wall, killing the bacteria (5).

Ultrasound (sonication) is a chemical-free process that causes cell disruption by inducing cavitation in a solution. Bubbles form and break, generating turbulence and pressure differences that can rupture the microorganisms (5).

Sonication can also be combined with high temperatures (48°C) to rupture microorganisms, in a process called thermosonication. This technique is capable of damaging cells to the point that they are unable to adequately generate extracellular polymeric substance (EPS) on an RO membrane, forming fewer and less-aggregated colonies than in untreated water (5).

Thermal processes are generally not applicable to standard RO membranes, which have a stability limit of 45°C — well below the sterilization temperature required for thermal deactivation. High-temperature membranes intended for food/beverage and pharmaceutical applications typically tolerate temperatures up to 90°C for short periods of time (usually during disinfection and cleaning).

Chemical biocides are used to treat feedwater to membranes systems as well. The efficacy of a biocide depends on:

Biocides are classified as oxidizing or non-oxidizing. Of the oxidizing biocides, chlorine is most commonly used for membrane applications because it is easy to use, widely available, and able to deactivate most pathogenic microorganisms quickly (3). However, because chlorine tends to form disinfection byproducts (DBPs), such as trihalomethanes (THMs) and haloacetic acids (HAAs), other biocides are increasingly being employed, including chloramine, chlorine dioxide, ozone, bromine, iodine, 1-bromo-3-chloro-5,5-dimethylhydantoin (BCDMH), peroxide/peracetic acid, potassium permanganate, copper sulfate, sodium bisulfite, dichloroisocyanurate (DCC), 2,2-di-bromo-3-nitrioproprionamide (DBNPA), and isothiazolones.

This article limits the discussion of physical and chemical RO membrane disinfection techniques to those summarized in Table 1.

Nanoparticles for drug delivery can be better designed by modeling the body as unit processes connected by the vascular system. Each organ and organ function can be represented as a unit process on organ-on-a-chip devices.

Ammonia is critical in the manufacturing of fertilizers, and is one of the largest-volume synthetic chemicals produced in the world. This article explores the evolution of ammonia production and describes the current manufacturing technologies.

Synthetic biology is growing in both interest and impact. This developing field combines techniques from such disciplines as genetic engineering, molecular engineering, systems biology, and computer engineering. The scientists and engineers who work in this field design and construct novel...

Traditional methods of DNA synthesis are slow and costly, and hinder the design-build-test cycle for creating optimal gene sequences and protein variants. This article presents a novel approach that will allow researchers to explore synthetic biology’s full potential.

An integrated bioengineering platform that harnesses the synthetic biology toolbox is the key to an economically viable commercial bioprocess.

This is an expanded version of the Editorial that appeared in the print version of Chemical Engineering Progress,September 2016 ...

Patent Update: Issues to Consider in Claiming Your Invention

In 2014, a fire occurred on a passenger vessel in the Atlantic Ocean about a mile from the U.S. A crewmember discovered the small fuel spray fire above one of the four propulsion engines during his routine rounds. He left the area and informed the bridge. Proper emergency procedures were followed...

YPOV: Get Back on Your Feet After a Layoff