Waste heat is an enormous and largely untapped source of low-cost energy. More than half of the energy consumed in the world escapes into the atmosphere in the form of waste heat. With global energy demand projected to increase by nearly 50% by 2040, and electricity demand expected to grow by nearly 70% within the same time frame, the magnitude of the waste-heat problem becomes daunting. 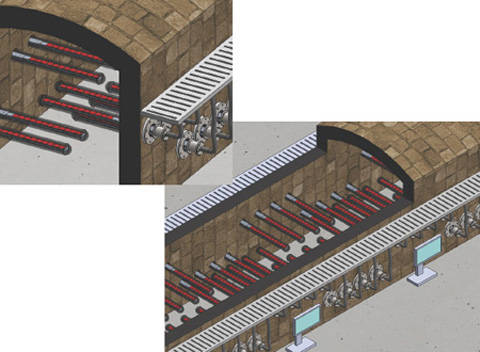 ▲ MTPV Power Corp.’s heat-to-power system employs arrays of emitter and PV semiconductor chips (red) to convert industrial-scale waste heat into electricity. In an industrial glass furnace application, sets of 4 MTPV EBLADE Power Platform devices are deployed along the length and through the walls of a flue conveying hot exhaust gases.

With support from the National Science Foundation, MTPV Power Corp. has developed a device that converts waste heat directly into electricity. Based on the company’s proprietary micron-gap thermophotovoltaic technology, the system consists of two chips — a hot emitter chip and a cooler receiver photovoltaic (PV) chip — separated by a very small gap (< 1 μm). Waste heat from an industrial facility directly heats the emitter chip, which radiates infrared light across the small gap onto the PV chip. The low-bandgap PV chip converts the IR light into electric power, similar to the way a solar cell converts sunlight into electricity.

Thermophotovoltaic (TPV) technology is not new. TPV devices were developed in the early 1960s, but widespread adoption of the technology has been hindered by high material costs and inherently low energy flux. The MTPV approach changes the economic equation by creating substantially more power in the same footprint.

By reducing the gap between the two chips, MTPV Power has significantly increased the amount of energy that is transferred between the emitter and the receiver. Thermal energy that would get trapped inside the body of the emitter in a conventional TPV system is instead transferred by evanescent coupling of radiation. Because the gap is so small, energy transfer rates significantly higher than conventional TPVs can be achieved. The patented approach to creating and maintaining this gap at extreme temperature differentials is key to the commercialization of the technology.

MTPV’s compact, modular systems can be easily retrofitted into the waste-heat streams of existing industrial infrastructure without compromising upstream processes. Thanks to its small footprint, the MTPV EBLADE Power Platform has an ideal form factor for installation into the production facilities of some of the world’s largest industries, such as oil and gas exploration, petrochemicals, and chemical processing, as well as glass, steel, and cement manufacturing.

The heat-to-power production of the MTPV system will be based on the plant’s exhaust fluegas temperatures, composition, and mass flowrates. For example, a furnace used to manufacture glass typically produces exhaust gases at temperatures of 800–1,400°C at a thermal rate of 17 MBtu/hr (about 5 MJ/s or 5 MW).

In a typical installation, multiple MTPV devices would gain access to the waste heat energy through ports in the flue wall, with the thermal energy radiating from the hot walls to the emitter chips. As many as 20 or more MTPV systems can be placed in each flue, and with two flues per furnace, the expected power output (from recovered waste heat) from each glass furnace is up to 200 kW to 1 MW. This power would offset up to $600,000 in annual electricity expenses at the U.S. average industrial cost of $0.07/kW-hr. Savings would be significantly greater in high-cost locations such as California ($0.136/kW-hr), Germany ($0.155/kW-hr), and Italy ($0.26/kW-hr).

MTPV Power is deploying pilot-scale systems to customers in preparation for full commercial launch and is developing strategic partnerships to penetrate initial markets, with a focus on heat environments with temperatures in the 600–1,400°C range generating up to tens of MW of output.

Look to the Future with Succession Planning

As experienced individuals retire or leave your organization, make sure business objectives can still be met by establishing a succession plan.

Bow tie diagrams are useful for visualizing process safety risks and safeguards. Although typically used after an incident has occurred, bow tie diagrams can also be employed during a process hazard analysis.

Pump Sizing: Bridging the Gap Between Theory and Practice

This article explains some of the core concepts behind pump sizing.

Editorial: Solar Energy is Good for the Soul

This is an expanded version of the Editorial that appeared in the print version of Chemical Engineering Progress, December 2016. ...

AIChE Journal Highlight: Use these Tools to Ease into Active Learning

Patent Update: Is the Subject Matter of Your Invention Eligible for Patenting?

Some ignition sources are obvious. A glowing cigarette, an active oxyacetylene torch, and a cascade of sparks and burning metal from a grinder are hard to miss. Others ignition sources may be hidden, such as glowing particles from past hot work, hot slag, a smoldering fire, or even unintended...