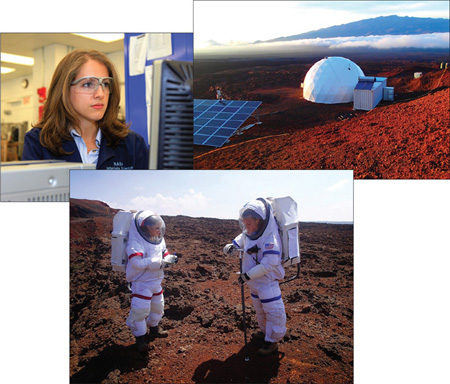 ▲ At top left, Meier works in her lab at KSC. At top right, the HI-SEAS dome is located on the rocky slopes of Mauna Loa. In the center photo, Meier and a teammate conduct research while wearing specialized exploration suits.

As a chemical engineer for NASA at Kennedy Space Center (KSC), Annie Meier has put five years of effort into creating solutions to some of the most pressing problems that astronauts — and even society — will encounter. “The technologies we produce for space can help our planet Earth as well,” she says. “We need to think of Earth as our spacecraft. How can we live here without damaging it with polluting gases and harmful byproducts?”

One of Meier’s projects centers on creating a reactor that can recycle waste and debris into methane, oxygen, and water. During long-duration missions in space that may take years — such as a future mission to Mars — crews will generate a significant amount of waste, which can be unhygienic if it accumulates in the ship. A highly efficient reactor that could create useful byproducts would not only help space missions, it could also be valuable for Earth, where more efficient methods of trash disposal are needed.

There are quite a few hurdles in constructing a trash-to-gas reactor. It must be able to handle the trash that would be created in a typical day of space exploration, such as hygiene products, food packaging, and clothing, says Meier. Because each item has a different thermal degradation temperature and off-gassing potential, it will be a major challenge to safely and efficiently convert the mix of waste to gas in the closed environment of a spacecraft.

Another challenge is ensuring that the reactor creates minimal harmful byproducts so as not to endanger the crew. “There are also challenges in continuous performance and resource ability,” says Meier. “We cannot have a power-hungry system that needs frequent filter or catalyst replacements.” Reduced gravity in space is another hurdle that Meier’s research is working to tackle.

Meier was raised on Long Island, New York — far from Cape Canaveral. “Growing up, I did not know what an engineer was, and I did not know that I wanted to be one,” she states. She was inspired by her high school chemistry teacher;...