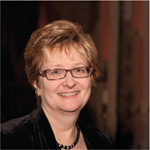 Fishman criticized the official analysis of water use in the U.S. compiled by the U.S. Geological Survey (USGS). Each report covers one year; the most recent, released in November 2014, covers the year 2010. He pointed out: “In the time it took to compile the 2010 report, Texas endured a four-year drought. California settled into what has become a five-year drought. The most authoritative water-use data … [is] from the year before the droughts began.”

One remedy for the data dearth, Fishman suggested, would be a report modeled after the annual energy outlook published by the U.S. Energy Information Administration (EIA). Those reports include projections based on the factors expected to shape U.S. energy markets 25 years into the future. The EIA says “the projections provide a basis for examination and discussion of energy market trends and serve as a starting point for analysis of potential changes in U.S. energy policies, rules, and regulations, as well as the potential role of advanced technologies.” Fishman described the report as “not just authoritative, it’s indispensable.” He wrote that, “More than any other single step, modernizing water data would unleash an era of water innovation unlike anything in a century.”

Recalling our coverage of big data analytics in the March issue of CEP, I was surprised to learn that it takes so long to collect and publish one year’s worth of water data. Leo H. Chiang, guest editor of the big data special section, wrote that “big data and domain knowledge can be used synergistically to move forward and answer important questions, to design better experiments, or to determine additional sensors needed to address those questions.” This applies to water management — we need to figure out what the relevant questions are and how to collect relevant data, and then apply domain knowledge to answer the questions, he says.

Nolen agrees that measurement is very helpful to understand where there are problems to be addressed and best practices to be shared — and we can’t manage what we don’t measure. But, she emphasizes, “Tracking water consumption is just one piece of a water-management program.” Nolen, Eastman Chemical Co.’s worldwide energy program manager and water conservation champion, says, “We found that many elements of the [energy-management] program can be leveraged for a water conservation program.” Her article explains how she and her colleagues are doing that. Consider implementing her suggestions at your facility.

As chemical engineers, we are aware of the importance of water in chemical processing — as a reactant, solvent, and heat-transfer fluid. We understand the mass and energy balances involved in determining water quantities, and we know that different applications require water of different qualities. We probably (more so than the average person-on-the-street) realize that the prices we pay for water do not accurately reflect either supply and demand or the costs to treat and deliver the water and maintain the necessary infrastructure. So who better than chemical engineers, and AIChE’s International Society for Water Solutions, to tackle the water-management challenge?