Back To Basics
September
2015
Pete Sharpe

Plastics are some of the world’s most diverse and useful manufacturing materials. While plastics encompass a large number of materials, polyethylene and polypropylene are two of the major plastic types found in many consumer goods, from car parts to shopping bags to water pipes.

Several types of reactors can make polymers, including fluidized-bed, loop, autoclave, and tubular reactors. Different grades of polyethylene and polypropylene offer a wide range of physical properties, such as density, stiffness, flexibility, opacity, melting point, texture, and strength. Manipulating variables in the reactor, such as monomer, comonomer, catalyst, and cooling media flowrates, can control key quality parameters. Additives and colorings can modify the appearance of the polymer.

Polymer plants are semi-continuous processes. Raw material is fed into a reactor continuously at the front end, while polymer powder and pellets are packaged in batches. Most sites operate multiple lines with many bins and silos for storage and blending. The plastics are eventually delivered to customers using barges, trucks, or rail cars.

This article describes the different polyolefin production processes, their key operating parameters, and ways to use automation for improved quality control and higher throughput.

The chemistry of making plastic

Similarly, polypropylene (PP) is made by breaking the double bond in a propylene (C3H6) molecule, in the presence of a catalyst, to form long chains of three-carbon-atom molecules (Figure 2). The third carbon atom adds a complexity: On which side of the chain will the methyl (CH3) groups fall? They could all be on one side of the chain’s centerline, or backbone (isotactic), they could appear alternately on opposite sides of the backbone (syndiotactic), or their positions could be random (atactic). These arrangements have different physical properties.

Polymerization reactions will also consume hydrogen, which is required to quench the reaction (i.e., end the chains), and some will involve a secondary ingredient (known as a comonomer). Since the concentrations of these components in the reactor affect the probabilities that specific reactions will take place, the composition in the reactor effectively sets the amount of branching and the length of the chain.

▲Figure 1. Ethylene is a stable molecule with two carbon atoms connected by a double bond. Polyethylene is made by the reaction of multiple ethylene molecules in the presence of catalyst.

The polymer industry employs many catalysts, and new catalysts are developed every year. Different catalysts are used to create polymers with particular properties, even in the same reactor. Each PE or PP process licensor incorporates proprietary catalyst formulations in its reactor designs. Depending on the type of reactor, the catalysts can be solid particles or suspended in hydrocarbon or solvent.

Polymerization is a highly exothermic reaction, and it requires continuous cooling to prevent runaway reactions. Most reactor systems include an emergency quench that quickly shuts down the reactor if the temperature reaches a predetermined setpoint. Before the implementation of redundant control mechanisms, a runaway reaction could cause the reactor to become completely plugged with plastic. Process designs have since changed and safety systems have been implemented to prevent such incidents. 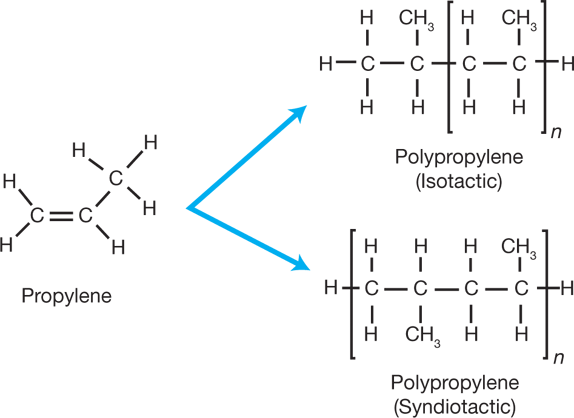 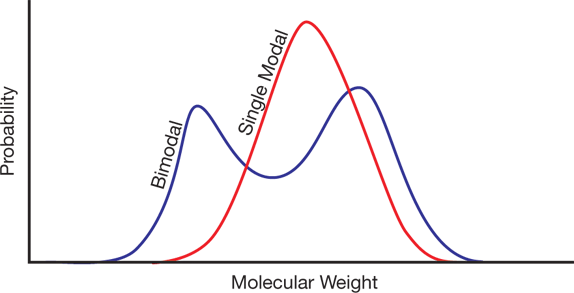 ▲Figure 3. The molecular weight distribution of a bimodal polymer has more than one peak.

Although polymer properties can be modified somewhat in the blending and extruding steps, the conditions in the reactor set the product grade(s) — as defined by a few key quality measures — that can be made. In general, polyethylene is categorized based on its density, the linearity of the molecules (i.e., degree of branching), and its molecular weight (length of the chains). Other polymer qualities, including the molten flowing property, known as the melt-flow index, are a function of the crystalline structure and are also primarily determined by the polymerization reaction. The melt-flow index determines the polymer’s behavior in downstream operations, such as extrusion, blow molding, or film production.

The most common polyethylene grades are: