Industries ranging from pharmaceuticals to oil and gas depend on filtration and separation technologies. Typically, filters or centrifuges are used to separate dispersed particles or droplets from a host fluid. Those technologies, however, have drawbacks. Filters cannot handle highly concentrated media and they eventually become clogged and require system shutdown for cleaning or replacement. In biopharmaceutical applications, cells captured by filters cannot be reused; they become waste. A centrifuge can handle higher concentrations, but only by imposing gravitational forces that are too high for most living cells to survive.

With funding from the National Science Foundation, FloDesign Sonics, based in Wilbraham, MA, has developed a filterless separation technology called acoustic wave separation (AWS). Based on acoustic standing waves, the AWS system can capture and separate particles or droplets from a host fluid, and purify fluids without using membranes, chemicals, or centrifuges.

The patent-pending AWS system creates a three-dimensional (3D) acoustic force field to facilitate continuous separation. A piezoelectric transducer in the system is excited at a characterstic frequency, which simultaneously excites several vibration modes and generates a sound wave. The sound wave is reflected back by a reflector, and the combination of these two waves creates an acoustic standing wave in the fluid. The standing wave exerts a 3D acoustic force on the suspended particles or droplets, trapping them in the acoustic field and driving them together to agglomerate or coalesce into larger clusters. These larger clusters fall to the bottom of the channel, where they can be separated from the fluid. 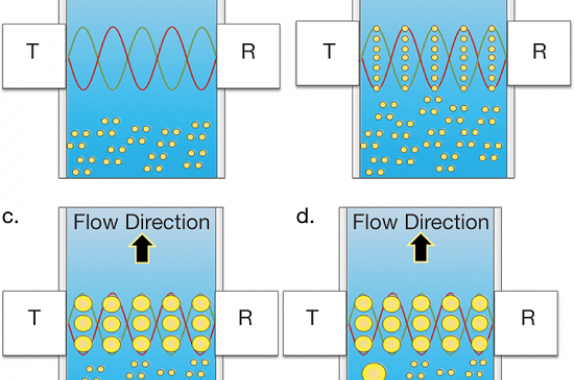 The proprietary technology can be used in many applications in biopharmaceuticals, oil and gas, food and beverage, and industrial processing, as well as in medicine. For example, the technology could be used during certain types of surgery to clean salvaged blood that has become tainted with lipid particulate and other debris. Current techniques for cleaning salvaged blood for autologous transfusion are limited to centrifugation, which places a high shear on the cells, and membrane filtration, which is limited by the size of the particles it can separate. The AWS technology offers low-shear processing and the ability to separate wanted cells from unwanted particulate without damaging the cells.

FloDesign Sonics has successfully tested its AWS system for primary cell clarification in biopharmaceutical manufacturing. Recovering biologic products, such as recombinant therapeutic proteins and monoclonal antibodies, from mammalian cells requires a purification process with high yield, product consistency, and reproducibility. However, significant variability exists in cell culture turbidity and viability, so separation processes must be specifically designed for each application. The FloDesign AWS system is a universal separation technique.

The AWS has proven to be a robust technology for the removal of cells and cell debris across a wide range of cell densities, turbidities, and viabilities. FloDesign has shown that the performance of the AWS technology in many cases exceeds that of traditional filters and comes close to or exceeds that of centrifuges with regard to cell clarification, reduction in turbidity, and product recovery. It further enables two important concepts, single-use and continuous manufacturing.

FloDesign is currently testing its technology in laboratories of major biopharmaceutical end users, and is on track to deliver its first system to the market by the end of 2015.