Burn injuries can be painful and debilitating. Patients may sustain substantial and permanent disabilities due to scar formation, skin contracture, and/or other deformities, which can have profound aesthetic and social consequences. Such burn injuries also require costly health care expenditures. And, some patients may not survive severe burn wounds.

Several primary methods are available for treating major burns, including topical silver sulfadiazine (SSD) cream, skin-replacement products, and, most recently, fabrics impregnated with nanocrystalline silver. However, those methods may require painful dressing changes during the course of treatment, with subsequent injury to the wound bed and to healing tissue upon removal of the adhered dressing material. In addition, the treatment materials may be incompatible with washing and showering, which may facilitate microbial or debris contamination of the wound.

To address some of the problems associated with existing wound and burn dressings, Rochal Industries, based in San Antonio, TX, with funding from the National Science Foundation, has developed a skin substitute that functions as a pseudo-epidermis. Called Bioshield Wound Dressing, the new material is made of a synthetic polymer dissolved in a nonstinging, volatile, hydrophobic solvent. After it is sprayed onto the wound, the solvent evaporates, leaving behind a transparent coating that conforms to the contours of the wound, inhibits bacterial ingress, and facilitates cell attachment, viability, and proliferation. 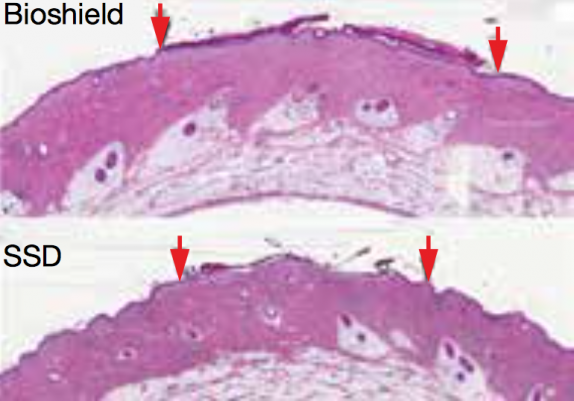 ▲ Top: A second-degree burn wound (between the two red arrows) treated with Bioshield was covered with new epithelial cells (dark pink layer on top of image) after 10 days post-injury. Bottom: In comparison, the same wound treated with silver sulfadiazine (SSD) did not heal as quickly, as shown by the much thinner layer of epithelial cells that had formed on the wound surface after 10 days.

The cell behavior of the pseudo-epidermis appears to be correlated to the low surface free energy of the coating polymer and its subsequent cell compatibility. The lower the polymer’s surface free energy, the more selective the type of cell that attaches to it, which in turn appears to influence the mitigation of scar formation.

The potential benefits of the Bioshield technology for burn healing include rapid pain relief, improved regrowth of epithelial tissue with less inflammation, improved tissue repair with less scarring, prevention of contamination from microbes and debris, and optical transparency to allow for visualization of the healing’s progress. In contrast to traditional bandages, which can cause abrasion when removed, the Bioshield pseudo-epidermal coating desquamates over time as the injury heals.

Bioshield Wound Dressing could also be used to treat surgical donor sites and recipient sites in skin grafts, as well as to treat skin tears. A skin graft is a section of epidermis and dermis that has been surgically removed from one part of the body (donor site) and transplanted to another section of the body (recipient site), whereas skin tears are wounds that result from a separation of the epidermis and the dermis. Skin grafts are often performed after excision of damaged skin in order to cover and improve the function and appearance of the damaged area, while skin tears are often associated with an increasingly aging population.

“A commercial, easily utilized, liquid adhesive coating for burn injuries and wound treatment based on this facile technology would be of great benefit in the treatment of partial-thickness burns. It could potentially hinder scar formation, a normal outcome for major burn wounds, in addition to reducing pain by closing the wound, covering exposed nerves, and facilitating wound healing by supporting epidermal growth,” says Steven Wolf, professor of surgery, Golden Charity Guild Charles R. Baxter Chair, Vice Chairman for Research, and Burn Section Chief at the Univ. of Texas Southwestern Medical Center, Dallas, who collaborates with Rochal Industries.

Rochal is currently manufacturing the Bioshield Wound Dressing in a GMP facility for regulatory submission.

Use this holistic technique to identify and quantify the potential impacts of a product or process throughout its life cycle. ...

Israel’s Chemicals Industry: From the Desert to the Dead Sea

Since Israel’s independence in 1948, its chemicals industry has flourished thanks to the Dead Sea and the minerals it provides. A highly educated and skilled workforce makes this small nation a global power player in the pharmaceutical and electronics industries.

An independent consultant faces unique demands, but can reap many rewards.