“I think about climate often. It’s hard not to — I doubt a day goes by that I don’t see an article, news report, or email that mentions climate,” writes past editor-in-chief Cynthia Mascone in the editorial of CEP’s special issue, “Thinking About Climate.” She explains that the open-access digital issue (aiche.org/cep/climate-issue), a collaboration between CEP and Texas A&M professor Mark Holtzapple, looks at climate through a chemical engineering lens, with articles that address observations, modeling, impacts, and solutions. The issue is not meant to be a definitive treatment of the subject. But with 119 figures, seven tables, two sidebars, and 210 reference citations, it provides a wealth of information on the basics of climate and climate change and “is intended to provide an overview that helps you to think about climate without getting lost in the claims and counterclaims,” she says.

The introductory article sets the stage for the climate change discussion. It provides an overview of the early scientific reports about global warming and climate change, a few of the international agreements aimed at reducing greenhouse gas (GHG) emissions, energy industry statements and insurance industry perspectives, concerns about the impacts of climate change on the military, and Pope Francis’s encyclical on climate change. It also takes a look at the depiction of climate change in film.

Concluding Part 1, Holtzapple writes: “In the future, the industries served by chemical engineers are likely to be subjected to regulations that restrict or penalize carbon dioxide emissions. Chemical engineers have the intellectual skills to respond to these challenges. Therefore, it is incumbent on us to educate ourselves about climate change so we can adapt and help shape a sustainable future.”

Climate observations. The second article documents the increases in atmospheric carbon dioxide concentrations and global average temperatures that have occurred since the beginning of the industrial age in the mid-1800s. Sources cited include datasets based on instrumental records and satellite measurements from a variety of organizations. “Despite the numerous challenges associated with measuring average global temperature, the various sources report very similar findings” (Figure 1) … and “surface measurements are consistent with satellite temperature measurements,” Holtzapple writes. 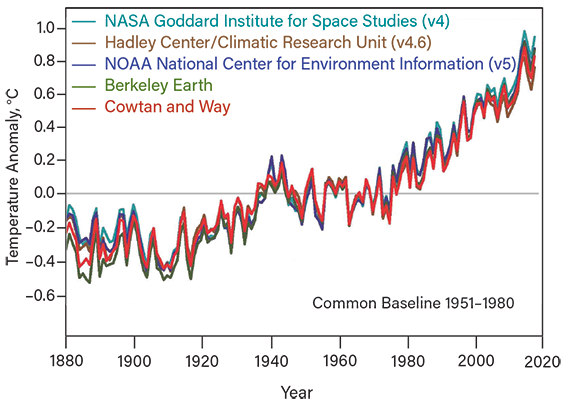 Figure 2 shows extreme Arctic warming in February 2018, with an anomaly of 12.3°C. A temperature anomaly is the difference between a given temperature and a baseline temperature. In this case, the baseline is the global average temperature over the period 1951–1980, which is estimated to be 14.0°C. 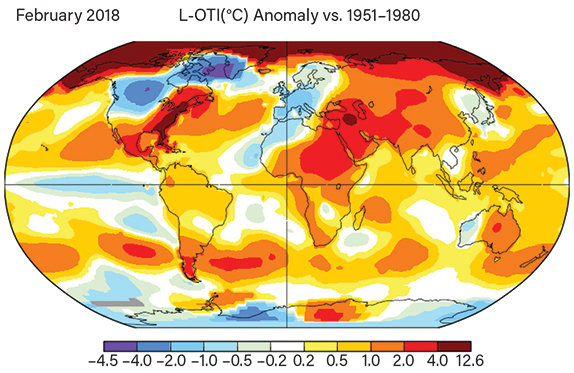 Climate modeling. Holtzapple notes that “measurements taken during the last 140 years show that global temperature and carbon dioxide concentrations are correlated” (Figure 3). “However, correlation does not imply causation. Identifying causation requires a deeper understanding of the underlying phenomena that link the correlated variables,” he says. Because we do not have an experimental Earth and a control Earth that we could subject to experiments, the only available tool for discerning the impacts of human activity on the Earth is modeling. Climate models are based on the laws of physics and include scientific measurements (e.g., heat capacity, density, thermal conductivity, reflectivity) that are incorporated into computer simulations of the Earth. In some cases, the models are extremely simple, whereas in other cases, the models are exceedingly complex. And while all models are imperfect, they often provide useful information, he says. 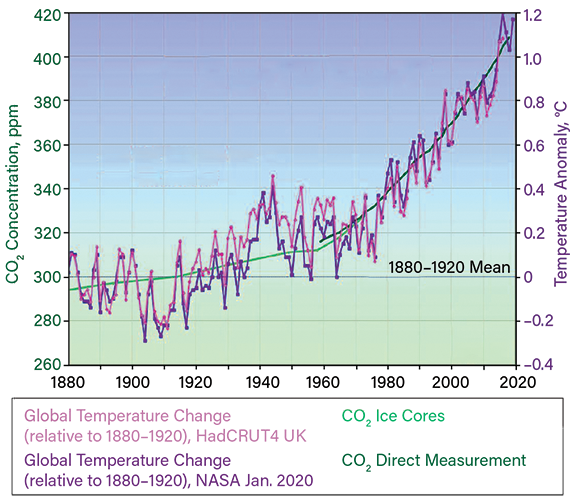 Impacts of climate change. Part 4 takes an in-depth look at the far-reaching impacts of climate change now and into the future. It covers impacts that are manifested in: plant growth; permafrost; sea ice, land ice, and glaciers; sea levels; precipitation; droughts; oceans; ecology; heatwaves; and agriculture. It also discusses several climate contributors that could reach a tipping point (i.e., a critical condition beyond which a significant and often unstoppable change occurs) — thermohaline circulation, permafrost, and methane hydrates.

Solutions to climate change. A wide array of technologies will be needed to deal with the impacts of climate change. This article explores some of the technologies that have the potential to mitigate climate change. These range from civil infrastructure projects such as dikes, dams, floodgates, drainage ditches, canals, and pumping stations to protect coastal cities from rising sea levels, to geoengineering approaches that involve large-scale intervention in the global climate, such as filtering carbon dioxide from the atmosphere and painting roofs and roads with reflective colors. Most strategies for addressing climate change focus on reducing the accumulation of carbon dioxide in the atmosphere.

Abatement potential is the magnitude of potential carbon dioxide reductions that are technologically and economically feasible to achieve. A study by the consulting company McKinsey found that almost 40% of the abatement that could be achieved by 2030 could be achieved at negative marginal costs — i.e., the abatement technology pays for itself. Many of the low-cost methods to reduce carbon emissions involve improving the efficiency of lighting, motors, compressors, engines, and heating, ventilation, and air conditioning (HVAC) systems.

AIChE’s climate-related activities. AIChE updated its climate change policy statement in 2019. An article (excerpted from “AIChE Updates its Climate Change Policy Statement,” The ChE in Context, July 2019, p. 40) presents the statement and describes the process used by the Public Affairs and Information Committee (PAIC) in developing it. The statement can be found at aiche.org/aiche_climate.

It is important that chemical engineers and AIChE engage in dialogue across traditional boundaries and be open to understanding risks and creative solutions. Toward that end, in October 2018, the AIChE Board of Directors approved the formation of The Climate Solutions Community (TCSC) within the Institute for Sustainability. Its goal is to lead efforts to develop a portfolio of technical and government policy solutions to address both industrial and societal challenges. Engineers and scientists from across disciplines are invited to participate in TCSC. For more information and to join, visit aiche.org/community/sites/climate-solutions-community.

Hazardous material use and storage inside any structure affects its building and fire code occupancy classification, which dictates its allowable design and layout features.

Global challenges such as climate change, unsustainable development, and ocean plastic pollution highlight the need to rethink the linear lifecycle of most products.

Explore our selection of new books for February 2021.

Employ these strategies to become a resilient leader and foster resilience in your team.

Amid the great difficulties of the present, there is hope for the future.

AIChE Introduces Some of Its Recently Elected Fellows; Scholarship Applications are Due for Future of STEM Scholars Initiative; New Outreach Video Celebrates Chemical Engineering Possibilities; Last Call for Institute and Board Award Nominations is Feb. 15; Langer Prize Fellowship Applications Due...

ChemEs Must Sound the Alarm on Plastics; The Environmental Impact of Plastics: Still a Huge Problem

Within a 100-day span, a U.S. company had fires at two of its locations. Both fires were caused by static sparks that ignited flammable liquids and vapors.

Studies show that group support is necessary to instill training.

Spotlight on Safety: Fishing for Hazards

Hazard recognition is like fishing. You can head out to a unit with the intent of finding some hazards, and you will. However, somewhere out there a monster may lurk.