Cold atmospheric plasma (CAP), which, in its simplest form, consists of a partially ionized gas sustained in an air mixture with gases like argon and helium, produces reactive oxygen and nitrogen species (RONS). The CAP can send fluxes of RONS and, in some cases, electric fields and photons, to nearby living cells, tissue, plants, or media.

The plasma’s reactivity induces physiological changes in cells ranging from death to immune responses. For example, researchers have shown that CAP selectively eradicates cancer cells in vitro while preserving normal cells, and it significantly reduces tumor size in vivo. This preferential killing of cancer cells is one of the most intriguing aspects of the interaction of plasma with cells.

Plasmas can also self-organize to form coherent structures that modulate the electric field, adding another level of control and engineering capability.

Compared to other forms of matter, plasma is unique in its ability to change its composition and key parameters in situ and on demand, depending on specific requirements and environmental conditions. However, so far, the unique abilities of plasmas have not been fully explored. 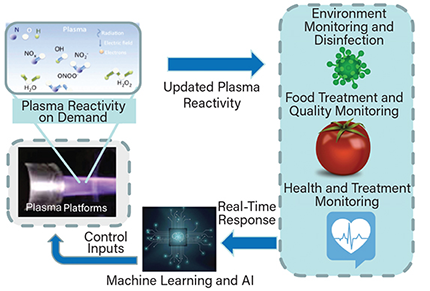 To address this issue, various CAP applications are under development by researchers at the Center for High Pressure Plasma Energy, Agriculture, and Biomedical Technologies (PEAB) at George Washington Univ. (GWU). PEAB is an Industry-University Cooperative Research Center funded by the National Science Foundation (NSF).

Researchers at GWU, Drexel Univ., and the Univ. of Michigan are collaborating on one such plasma-based system for disinfection. This system is capable of rapidly scanning for viral colonies on a surface and simultaneously directing the CAP beam to kill them. A handheld prototype of the system, under development by GWU, will be used to treat SARS-CoV-2 on various metal and plastic surfaces.

The GWU team then created a system to optimize plasma treatment of cancer cells by combining EIS for real-time feedback of cell response and an ANN for plasma species control. Preclinical animal trials are underway for further assessment of this system.

These technological developments were made in conjunction with one of the industry members of the PEAB center that is also involved in transitioning this technology into commercial products. “Real-time feedback is key to improving performance of dynamic systems like a plasma device, and the recent progress in economical AI-enabled computers will revolutionize this approach,” says Jagadishwar Sirigiri, lead investigator and President and Founder of Bridge12 Technologies.

This technology was funded through the NSF Industry-University Cooperative Research Centers (IUCRC) program.

Hazardous material use and storage inside any structure affects its building and fire code occupancy classification, which dictates its allowable design and layout features.

Global challenges such as climate change, unsustainable development, and ocean plastic pollution highlight the need to rethink the linear lifecycle of most products.

Explore our selection of new books for February 2021.

Employ these strategies to become a resilient leader and foster resilience in your team.

Amid the great difficulties of the present, there is hope for the future.

AIChE Introduces Some of Its Recently Elected Fellows; Scholarship Applications are Due for Future of STEM Scholars Initiative; New Outreach Video Celebrates Chemical Engineering Possibilities; Last Call for Institute and Board Award Nominations is Feb. 15; Langer Prize Fellowship Applications Due...

ChemEs Must Sound the Alarm on Plastics; The Environmental Impact of Plastics: Still a Huge Problem

Within a 100-day span, a U.S. company had fires at two of its locations. Both fires were caused by static sparks that ignited flammable liquids and vapors.

Studies show that group support is necessary to instill training.

Spotlight on Safety: Fishing for Hazards

Hazard recognition is like fishing. You can head out to a unit with the intent of finding some hazards, and you will. However, somewhere out there a monster may lurk.