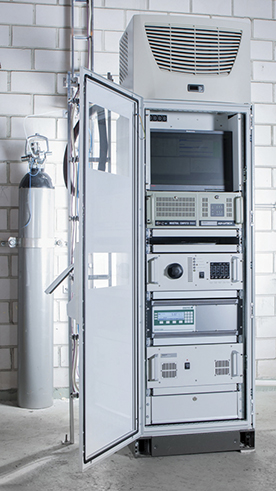 ▲Figure 1. FTIR spectroscopy is the most widespread analytical technology for industrial applications that require the continuous and simultaneous measurement of multiple species.

Fourier transform infrared (FTIR) measurement techniques employ an optical modulator known as an interferometer. Collection of a spectrum using a prism or series of infrared (IR) filters allows measurement of only a single wavelength band at any given moment. On the other hand, the Fourier transform of interferometer data allows users to obtain absorbance information across all spectral wavelengths simultaneously. The ability to collect a wide range of wavelength information simultaneously enables an FTIR instrument (Figure 1) to measure a spectrum much faster than a dispersion or filter instrument. This article discusses the basics of FTIR technology and how it is commonly used today.

For many years, the main factor preventing FTIR analysis from becoming more commonplace was the long computation time required for the Fourier transformation, a mathematical tool that converts a time-domain signal to a frequency-domain signal. However, the invention of a fast Fourier transform algorithm and advances in digital signal processing have made it practical to build small, low-cost FTIR spectrometers capable of rapidly measuring a complete mid-IR spectrum with moderate to high resolution and very good signal-to-noise ratio. Coupled with advanced algorithms for identification and quantification of the chemical species represented in the spectrum, modern gas and vapor FTIR analyzers can identify multiple unknowns and can quantify components of complex gas-phase mixtures containing dozens of volatile organic compounds (VOCs).

The introduction of cube corner mirrors was a major improvement to FTIR spectrometers. It helped to relax the precision requirements for moving optical alignment components, making FTIR suitable for industrial and field measurement applications. Regulations limiting the emission of pollutants into the air have created a market for monitoring equipment that can demonstrate compliance with regulatory emission limits. Emissions monitoring has become a widespread application for FTIR gas analysis.

Other measurement technologies have been approved for emissions monitoring, but FTIR spectroscopy has become the most popular analytical technology for industrial applications requiring the continuous simultaneous measurement of multiple parameters. This ability to measure almost any gas, combined with the robustness and reliability of the technology, enable FTIR to be employed in a wide variety of applications. 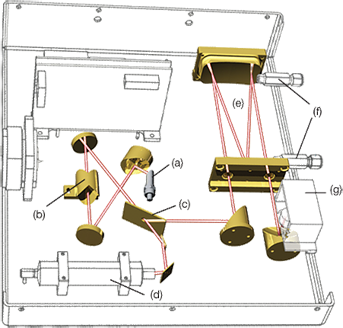 ▲Figure 2. An FTIR spectrometer consists of (a) an IR source, (b) moving or stationary cube corner mirrors, (c) a reference laser source, (d) a focusing optic, (e) a sample cell, (f) the sample gas inlet and outlet, and (g) an IR detector.

Several components work together in an FTIR spectrometer to generate the desired data (Figure 2). These elements include:

The beamsplitter and the mirror assembly are collectively known as the interferometer — the heart of an FTIR spectrometer. The motion of the mirrors causes the two beams produced by the beamsplitter to be out of phase; when they recombine, the IR intensity of the resulting beam varies according to the positions of the mirrors. The interferometer can be considered an optical modulator and the modulation of the beam is the key to calculating intensity at each frequency from the signal recorded by the IR detector.

FTIR gas analyzers identify and measure gaseous compounds by their absorbance of IR...