Natural gas combustion produces less greenhouse gas (GHG) emissions than the burning of other fossil fuels. For example, GHG emissions from shale gas can be 6% lower than conventional natural gas, 23% lower than gasoline, and 33% lower than coal. Unfortunately, much of this advantage is lost due the lack of containment infrastructure at hydrocarbon wells. Although vast amounts of heavier gases are captured by cooling, valuable methane and other light hydrocarbons cannot be liquefied by conventional means and are often intentionally vented and flared. The U.S. loses approximately 15% of its natural gas withdrawal in this way. 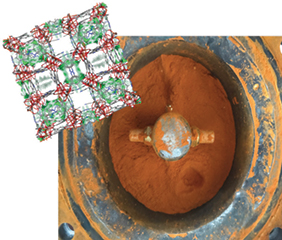 MOFs are an emerging class of adsorbents with porous crystalline structures made of metal ions (corners) linked together by organic molecules (linkers). Varying the metal corners and organic linkers allows for an enormous spectrum of material combinations and performance tunability. MOFs also have larger surface areas and more-accessible adsorption sites than traditional adsorbents.

Among the thousands of MOFs reported so far, the majority are composed of divalent metal cations. MOFs built from higher-valance metal cations (such as iron) are not very common, because their high charge density makes the crystallization more difficult to control. Unless modulated and fine-tuned during synthesis, rapid crystallization yields amorphous or polycrystalline structures with poor gas-capture properties. However, for a given linker, metals with a higher charge make for a more chemically stable MOF.

The MOFs developed by framergy are composed of high-valent cations, giving them extraordinary stability in both highly acidic and alkaline conditions, in high humidity, and in the presence of high concentrations of hydrogen sulfide. The company’s process uses a high ratio of a monodentate-based modulating agent to increase the back-reaction rate and slow MOF formation, allowing a more entropically favorable, highly ordered species to form.

These advances are expected to translate to lower capital investment requirements for companies who operate upstream hydrocarbon wells. Novel MOFs would allow them to separate natural gas components and extract other light liquid hydrocarbons such as propane and butane.

Demonstrations of framergy’s AYRSORB product line have exceeded the standard vent/flare gas recovery rate when tested on unprocessed natural gas compositions. During early summer 2018, this system was piloted in a 20-kg-scale wellhead flare gas capture. framergy later produced hundreds of kilograms of AYRSORB F250 to validate scalability and low-cost delivery of the system.

“MOFs were discovered over 10 years ago, and now they are being implemented in commercial applications. The MOFs from framergy are innovative, and we are excited to have their materials in our product line, especially as applications in this area progress,” said Dr. Ephraim S. Honig, CEO at Strem Chemicals, which distributes AYRSORB F250.

Next year, framergy plans to test a large-scale pilot of its ANG management system with several upstream, midstream, and downstream oil and gas operating company partners as a final step to commercialize this technology.

Communication that frightens employees triggers more behavior changes than similar messages without the scare factor. Including a fear appeal makes it much less likely that process safety incidents will be repeated.

To be successful, both capital projects and turnarounds need to be planned and implemented as one event.

This is an expanded version of the editorial that appeared in the August 2018 issue of CEP. ...

Process Safety Beacon: What If Your Agitator Fails?

Spotlight on Safety: The Three-Legged Stool of PSM