Air pollution is an important public health issue in the U.S. and worldwide. The World Health Organization (WHO) estimated that in 2012, 7 million people died (about one-eighth of all mortalities) from illnesses related to exposure to air pollutants (1). In addition to the human costs, there are also financial costs, including higher public health care costs associated with increased hospitalizations, as well as lost productivity. The high frequency of respiratory ailments, as well as the necessity of wearing an anti-pollution mask to reduce inhalation of pollutants in certain countries, is well documented in the news media.

In the U.S., concern over air pollution is significant. A 2015 Gallup poll showed that 38% of Americans were concerned about air pollution “a great deal” (2). A 2013 study by researchers at the Massachusetts Institute of Technology (MIT) estimated that about 200,000 Americans die prematurely each year because of air pollution, although this toll is brought on by all sources of air pollution — including nonindustrial ones — such as indoor combustion (e.g., cooking, home boilers) and mobile sources (e.g., automobiles, trucks, etc.) (3).

The cost of medical treatment, hospitalizations, and missed work time due to air-related health issues is staggering, and borne mainly by the public through government programs, not by those that cause the exposure. Therefore, laws over the past decades have been promulgated to reduce emissions from potential sources to reduce the risk of exposure and adverse health risk. However, there are limits to the stringency of such rules, because overly stringent rules may cause costs to rise and encourage facilities to move to locations with less stringent requirements.

It is critical for a facility to make realistic estimates of the emissions it produces, which will help in determining compliance, predicting potential public exposure and health impacts, and designing effective air pollution control equipment or strategies.

Processes and their emissions are dynamic and emission rates may continuously vary slightly; hence, we use the term “estimation” of emissions. The hope is that the estimated rate either will be reasonably close to the actual emissions or is conservative enough that it likely will not be exceeded in practice.

Many different techniques to estimate emissions are available. Each has advantages and disadvantages, or is best suited for a specific process. The user must determine the best method to estimate the emission rate of the air contaminant in question.

Factors to consider when choosing an estimation technique include:

You may need to select a technique that sacrifices some accuracy for the sake of practicality and cost-effectiveness. Different techniques may be needed for different operations. What is most important is to develop a program to regularly estimate emissions with needed accuracy from different processes that change over time.

The four major techniques for estimating emission rates are:

The U.S. Environmental Protection Agency (EPA) and other regulatory authorities and industry groups have published standards for the direct measurement of regulated air pollutants from many processes. Commonly known as stack testing, this is the direct measurement of the contaminant in question in the exhaust while the operation is taking place. Regulators often require a facility to perform such a test to demonstrate compliance with an emission limit in an operating permit or regulatory standard.

Performing a stack test that meets a published standard is technically complex. If your company is required to perform one, I strongly urge you to hire a testing firm experienced in the specific methods required. This article gives general background information about direct measurement of air pollutants; this information by itself should not be used to perform tests, but should help you work effectively with a testing contractor.

Direct measurement involves collecting a representative sample of gas from the exhaust or stack during process operation, pretreating the gas sample to remove any components that may interfere with the testing, and performing a chemical analysis to measure the concentration of the compound of interest. Simultaneously measuring the exhaust flowrate enables conversion of concentration into an emission rate (typically in pounds per hour). Quality assurance (QA) and/or quality control (QC) procedures accompany each step.

The basis of direct measurement is the group of procedures published by the EPA in 40 CFR Part 60, Appendix A (4). Appendix A contains several dozen methods. Virtually all U.S. regulatory agencies recognize these methods. These methods contain precise standards for performing the procedure, with QA/QC steps, and specify which data to record. Not following the procedure to the letter seriously risks the integrity of the results and jeopardizes their approval.

▲Figure 1. A typical process train to measure particulate matter emissions has a heated filter box and impinger tubes to measure the presence of specific compounds. Source: Adapted from (5).

The general procedure for collecting a sample from an exhaust stack for analysis is found in Methods 1–5, as are guidelines on setting up a testing train. Figure 1 is a schematic of a typical train (this particular setup is used to measure particulate matter emissions) (5). 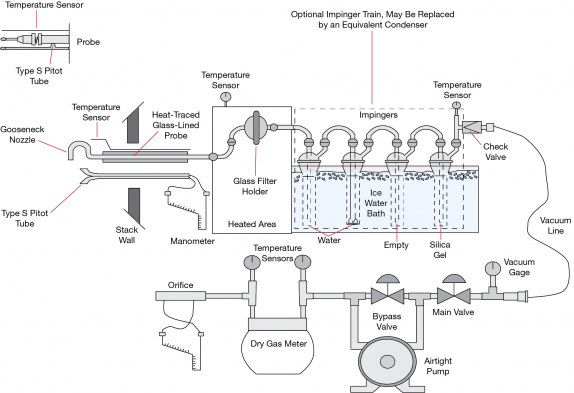 Every stack testing method involves inserting a testing probe into a hole in the exhaust or stack. The end of the probe must have an opening to allow the collection of some exhaust flow. This flow moves through the inside of the probe, typically through an area that pretreats the exhaust sample before it is tested for the contaminant of concern. The sample must be maintained at 248 ± 25°F (measured by a thermocouple) to prevent condensation.

Trains contain an S-type pitot tube to measure stack gas velocity by detecting a pressure difference proportional to velocity. Given the velocity and the stack diameter, flowrate is estimated and combined with contaminant concentration to determine a mass emission rate.

In most trains, the sample then flows through a heated filter box to remove particulate matter. This is necessary for measuring particulate emissions or removing particulates that may interfere with analysis of the desired compound.

The sample typically then flows through impinger tubes containing chemicals that remove and measure specific compounds. In most cases, the tubes are chilled by ice to condense out water. The gas sample leaving the impingers can then be directed to the appropriate analyzer to measure the concentration of the subject compound. A pump transports the sample at a uniform rate throughout the system. A centralized control box allows monitoring and adjustment of flow, temperature, etc.

Method 1 contains guidance for the selection of sampling ports and traverse points for acceptable sampling of a representative aliquot of exhaust. A key concern is collecting a uniform sample over time. The placement of the probe within the exhaust is less important when measuring a gaseous compound than particulate matter, because the gas concentration is generally uniform across the pipe’s diameter. However, the samples should not be taken from a section of exhaust...