Concentrating solar thermal (CST) technologies produce high-temperature, high-quality energy that can be used to drive a variety of engineering processes. CST is attractive because of free and abundant solar radiation, but significant engineering challenges need to be overcome. 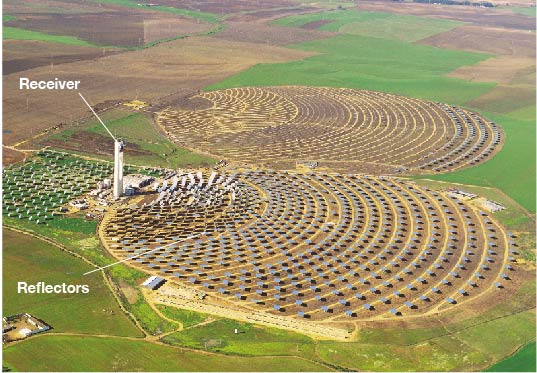 A CST system is composed of a field of distributed reflectors that move over the course of a day to concentrate sunlight onto a solar receiver (Figure 1). CST technologies have different geometries and arrangements, but the same principle of operation: A solar concentrator focuses solar radiation onto a solar-thermal receiver that absorbs the solar radiation, converting it to thermal energy.

CST is not a new idea. Stories of its application go as far back as antiquity. Folklore within the scientific community suggests that Archimedes led attempts to focus solar radiation onto Roman ships using many reflective surfaces. The first modern commercial application of CST was the implementation of a trough system in Egypt constructed in 1913 to produce hot steam to drive a pump for irrigation of semi-arid farmland (1).

The Solar Energy Generating System (SEGS), commissioned between 1984 and 1990 in the U.S., was the first use of concentrating solar for power generation. The SEGS project consists of nine separate trough power plants that have a total 354 MWe nameplate power generation capacity (2). The project marked the beginning of a resurgence of interest in CST technology.

All of the components in a CST plant are designed to facilitate the absorption of well-focused sunlight by the solar receiver; thus, all the interactions that the solar radiation undergoes must be considered.

▲Figure 2. Solar radiation from the sun passes through Earth’s atmosphere and is concentrated onto a solar receiver. The thermal energy produced can be used, stored as thermal energy, or converted to chemical energy and stored.

The entire atmosphere — from the top of the Earth’s atmosphere to the concentrator, and between the concentrator and receiver (Figure 2) — affects the quality of the solar radiation. The night and day cycle, clouds, and aerosols in the atmosphere cause intermittencies in the solar radiation reaching the receiver. Intermittencies must be accounted for, but energy storage technologies can mitigate their detrimental effects on CST performance.

This general discussion of CST technologies details the different types of solar collectors and the various applications to which CST can be applied, including electricity generation (i.e, concentrating solar power [CSP]), desalination, advanced oil recovery, and solar thermochemistry incorporating the production of solar fuels.

CSP is an important application of CST technology. The term encompasses both CST plants that are used to generate electricity and concentrating photovoltaic (CPV) power plants. This article focuses on CST’s application for power generation and does not discuss CPV.

Solar radiation and the atmosphere

Solar radiation incident at the outer edge of the Earth’s atmosphere has an intensity of about 1,370 W/m2 — the so-called solar constant. Because of the high temperature of the sun, the radiation has a very high exergy. As viewed from the Earth, the sun subtends a half-angle of about 4.65 mrad. Propagation through the atmosphere affects the intensity and the angular distribution of the incoming solar radiation. Aerosols scatter the incoming radiation, increasing the amount of circumsolar radiation, which affects the concentration and distribution of the image at the receiver of a CST collector. Clouds attenuate and scatter the radiation.

Thus, it is important to understand the time dependence and spatial distribution of clouds and aerosols. Meteorological models and experimentally derived data from ground stations and satellites provide an overview and inform predictions of time-dependent changes in the atmosphere, which help to define the expected functionality of CST technologies.

Radiation incident on the surface of the Earth is categorized as either diffuse or direct. In direct solar radiation, most of the angular distribution of the solar source is preserved, and this direct radiation can be concentrated and used in CST applications. Diffuse solar radiation cannot be concentrated because the angular distribution is randomized and optics cannot focus it.

Therefore, CSP plants rely on direct solar radiation, the intensity of which is described by the direct normal irradiance (DNI), expressed in SI units as Watts per square meter. Another important metric is the global horizontal irradiance (GHI), which includes the diffuse component of the solar radiation and is measured at a plane parallel to the Earth’s surface. 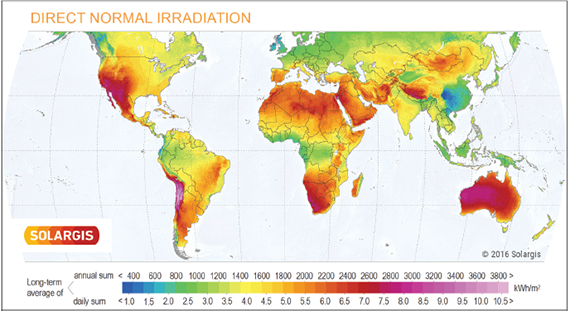 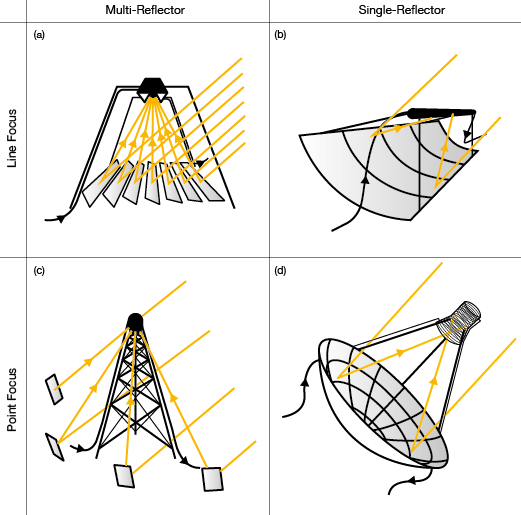 Choosing a concentrator (i.e., reflector) type is one of the chief optimization challenges of the fledgling solar thermal industry. CST plants use four different types of concentrators: linear Fresnel reflector (LFR), parabolic trough reflector, central receiver system with heliostats, and paraboloidal dish reflector (Figure 4). Each reflector type is defined by its ability to intercept and guide solar radiation to a thermal receiver that is engineered specifically for the reflector type and application. LFR and parabolic trough collectors are classified as line concentrators and track the sun along one axis. Central receiver systems with heliostats and paraboloidal dish collectors are called point concentrators and track the sun in two directions.

Linear Fresnel reflectors (Figure 4a). A LFR is composed of strips of mirrors. Each strip rotates around the long axis to guide incident solar radiation to a stationary receiver located above the reflectors. The collectors are aligned north-south.