Part 1 of this series (CEP, Jan. 2015, pp. 37–44) developed the basic equations for proportional-integral-derivative (PID) control, and presented both differential equations and difference equations. Here, Part 2 explains the tuning coefficient for each mode. Of the three modes, properly tuning the proportional mode is most critical. Hence, the article devotes more explanation to proportional than to integral or derivative.

The role of each mode

Why the emphasis on speed of response? Most processes are slow, some notoriously so. The controls need to make them respond faster.

In practice, there are two choices for mode combinations: PI or PID. The proportional and integral modes are used in all controllers, and derivative is included in a few (on the order of 10%). In the era of pneumatic and electronic controls, a common guideline for ordering controllers was PID for temperature controllers, PI for all others. Today, except for temperature loops, the use of the derivative mode is rare.

A good example of an application for the derivative mode is the temperature controller for a jacketed reactor. Two types of jackets are available: 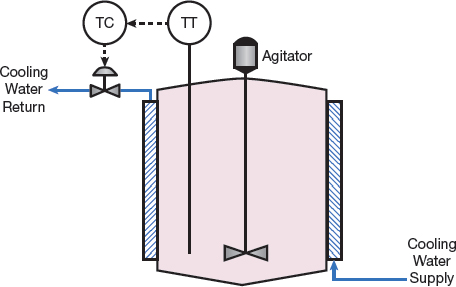 ▲ Figure 1. The temperature controller for a once-through jacketed reactor is a good application for the derivative mode.

The derivative mode is almost always used in the reactor temperature controller, regardless of the jacket configuration.

This explanation suggests that derivative should be beneficial. Reactor temperatures are very important process variables. Anything that improves the control of the temperature of a reacting medium is music to the ears of the product chemists. Especially in batch applications, closer control of reactor temperatures has become increasingly important. If the instrumentation can deliver tight control, the chemists and process engineers can usually tweak the process to realize benefits such as more uniform product, better yields (which translate into higher production rates), etc.

Derivative is not used in all temperature loops; just in those that matter — such as loops whose performance has a clear and significant impact on process operations. Incidental loops, such as utility temperature loops, are rarely tuned with the derivative mode.

Table 1 presents the options for the tuning coefficient for each mode. The supplier of a commercial control system determines which option is provided. Given the capabilities of digital technology, one would think the supplier would permit the user to make the selection, but that is generally not the case.

The implementations in most process controls rely on the PID control equation written as follows:

where M is the controller output, E is the control error, TI is the reset time, TD is the derivative time, and PV is the process...

The fundamental thermodynamic equations developed for aqueous electrolyte systems provide a springboard for modeling the more-complex and less-understood mixed-solvent electrolytes.