Polymer reaction engineering is an interesting field, with many rich and rewarding problems to be solved. To be successful in this field, a chemical engineer needs to understand a few principles beyond the basics of reaction engineering. Building on concepts presented in an earlier CEP article on plastics (1), this article explores some of the most important of those principles related to selecting, sizing, and troubleshooting polymerization reactors.

Polymers tend to be viscous, which often imposes lower limits on their concentrations in diluents and on reaction temperatures. At very low temperatures, or in the absence of a solvent, the viscosity of a reacting mixture might be so high that it severely limits heat transfer. Worse yet, the polymer might crystallize and coat the catalyst- and monomer-injection systems.

One common approach is to carry out the reaction in a low-viscosity continuous phase that includes monomer and other important components, with the polymerization occurring in a discrete phase made up of viscous, and sometimes even solid, polymer particles (Figure 1). Such heterogeneous polymerization systems are often used in free-radical polymerization.

An interesting example of a heterogeneous system is olefin polymerization in fluidized-bed reactors. A supported catalyst in the form of very small particles, with diameters of only a few microns, is injected into the reactor. Monomer in the continuous gas phase forms chains at the catalyst active sites. As the cycle of chain birth, growth, and death repeats, catalyst particles fragment and create more surface area for the monomer to attach to; the polymer links the fragmented catalyst pieces together, forming polymer particles whose final diameters are easily ten times those of the original particles (Figure 2). The viscosity problem is avoided, but the high reaction rates can cause a different problem: Particles that are unable to transfer energy to the gas phase at the same rate they are generating it are at risk of overheating, melting, and sticking to each other or to solid surfaces (2).

▲ Figure 2. In a fluidized-bed reactor, catalyst particles fragment, and polymer links the fragments. The polymer particle expands and can be an order of magnitude larger than the original catalyst particle.

Viscosity, like melt strength, is an end-use property — the kind of property that producers and their customers use to measure product performance. Underlying these properties sits another layer of properties that relate to molecular architecture and include molecular weight, polydispersity index, and degree of branching.

The molecular architecture of a polymer can be influenced by chemistry, reactor configuration, and process conditions, all of which must be well understood for reactor selection and design. Without that understanding, an attempt to improve throughput, for example, by raising reactor temperature, might lead to unexpected results in the customer’s application (3).

Olefin polymerization normally employs catalysts that are extremely sensitive to poisoning. Each catalyst active site produces multiple chains, and each chain lasts only fractions of a second before another chain takes its place on the active site. Growing chains are removed from active sites by chain-transfer agents. Hydrogen, a common chain-transfer agent, can have a significant impact on molecular weight, even at very low levels. The polymerization process can be complicated by side reactions that form macromers (i.e., chains containing a terminal double bond) and their subsequent reincorporation as branches along the chain backbone (4).

Although it is important to control the temperature and the level of chain-transfer agent, doing this is not as straightforward as it may seem, because in many reactors there is not just one temperature and one level of chain-transfer agent. As these conditions change in space or in time, the polymer that exits the reactor is usually a composite of polymer populations with different molecular architectures. Unlike a reactor that produces ammonia, where all product molecules are the same regardless of the temperature the reactants experienced as they flowed through the reactor, polymers can be, and typically are, complex mixtures of different molecules (5).

System design extends beyond the design of the vessel itself; other components require close attention as well. This section discusses some of the challenges involved in polymer manufacturing (Figure 3) and their impact on process equipment; some are explained in more detail in later sections. 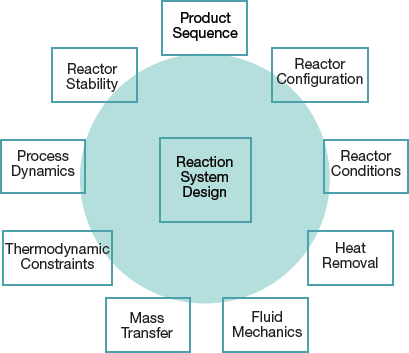 ▲ Figure 3. Reaction system design must take into account a wide range of considerations.

Polymers share a common problem with small molecules. Polymerization reactions, which are strongly exothermic, can release significant amounts of energy (6). (For example, olefin polymerization releases 96 kJ/mol; in the case of propylene, that translates to 2,300 kJ/kg.) The removal of that energy is thus a key aspect of reactor design.

Consider a 100,000-ton/yr plant for polypropylene production. The plant would release energy at an average rate of 7,300 kJ/sec. Some of that energy can go into heating the feed stream, but the majority of it must be removed by some other means. Imagine that 90% conversion is expected from a continuous stirred-tank reactor (CSTR) with a 30-min residence time and a feed stream containing 40% propylene. Such conditions would require a reactor volume of approximately 25 m3. A jacketed reactor of this volume has a heat-transfer area in the neighborhood of 30 m2. With an assumed heat-transfer coefficient of 1 kJ/m2-sec-°C, the required temperature gradient between process fluid and coolant is an excessive 243°C.

A jacket as the main method of heat removal imposes a serious limitation on the polypropylene plant. This limitation is often avoided by adding an external heat exchanger (Figure 4). Such a configuration is probably the most common arrangement used in polymer manufacturing today. 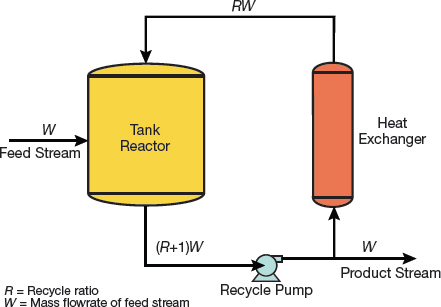 It is easy to see why the external heat exchanger is an attractive configuration. A shell-and-tube heat exchanger has an area per unit volume of 4/d (where d is the diameter of each tube). A shell-and-tube exchanger with 2-in.-dia. tubes and a volume that is 25% of the combined volume of the tank, heat exchanger, and the pipes connecting them has an available heat-transfer area of 500 m2; a temperature gradient of 15°C is sufficient to handle the energy released by the propylene polymerization system.

A simple energy balance for the tank in Figure 4 (ignoring the effect of reaction outside the tank) states that the energy generated by the reaction is removed in the heat exchanger or used to raise the temperature of the feed stream to reaction temperature:

Figure 5 plots the temperature difference across the heat exchanger in the 100,000-ton/yr polypropylene plant (Figure 4) as a function of recycle ratio, with a feed tempera 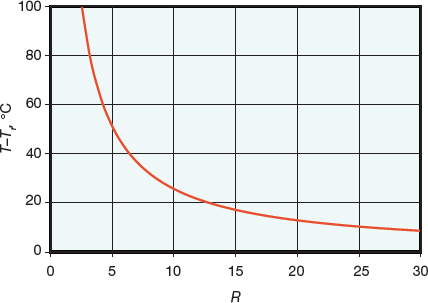 ▲ Figure 5. The temperature drop across a heat exchanger is a function of recycle ratio. This plot is for the exchanger in Figure 4 when T – Tf = 50°C.

ture that is 50°C below the reactor temperature (Tf = T – 50). Low recycle ratios, say R ≤ 10, require very large temperature differences. Recycle ratios of R > 10 may not be feasible, though — depending, for example, on the size of the recycle pump that you can afford...

The fundamental thermodynamic equations developed for aqueous electrolyte systems provide a springboard for modeling the more-complex and less-understood mixed-solvent electrolytes.

Editorial: An Editor Changes Their Mind About They

Career Corner: Volunteering is Good for Your Career

Spotlight on Safety: Process Safety Begins in the School Laboratory

Although the operations in your storage tank farm may not seem to be very complex, they may actually be more complicated than you think. There may be many interconnections between tanks. You may have to put material in tanks that are already partially full, or divide incoming material among several...