This is an expanded version of the Editorial that appeared in the print version of Chemical Engineering Progress, September 2014.

Whenever I come across an interesting article or tidbit of information in the general media that I think might make a good topic for an editorial, I file it away. Then, each month when it’s time to write my editorial, I browse through those (paper and electronic) files to find anything that relates to what’s in the issue or what’s happening at AIChE.

A few years ago, I came across Discover magazine’s “20 Things You Didn’t Know About … The Periodic Table,” and I knew it was a keeper. Surely, I thought, at some point I’ll be able to relate this to an article.

So you can understand why I was elated when I read the first sentence of this issue’s cover feature, “Manage Raw Material Supply Risks” by Anthony Ku and Stephen Hung (pp. 28–35): Modern society depends on a wide and increasing array of raw materials — from simple steels to esoteric compounds derived from the far corners of the periodic table …” There it was — my chance to have some fun with one of my favorite pieces of artwork.

My first memorable encounter with the periodic table came on the first or second day of my high school chemistry class, when our homework was to memorize the first 36 elements in order. My best friend, Chris, and I devised a mnemonic to help us remember: Harry Helped Little Bees Because Chris N[her last name] Ordered Frank to Never Nail Meg’s Altogether Silly Pot, So Clarence Arrived. The next sentence would now be considered politically incorrect and so will remain between Chris and me. The closer: Gary and George Asked Seemingly Brilliant Krestions. (We thought we were being quite brilliant with that one.) Even though some of it was nonsensical, we were the only two in the class who got 100% on the quiz. (The fact that we were girls and the teacher did not think girls should study advanced sciences — let alone do better than all of the boys in the class — is a story for another time and place.)

My enthusiasm for the periodic table continued into adulthood. One year, as my husband was looking for a unique Christmas gift, he came across a 38-in. by 26-in. poster of the periodic table at the New York Hall of Science. It’s well illustrated, with pictures of John Dalton, Amedeo Avogadro, Dimitrij Mendeleev, Marie Curie, and Albert Einstein. Pie charts summarize the abundance of chemical elements in nature — in the earth’s crust, seawater, air, and the human body. A chart lists the elements in alphabetical order with their atomic number, year of discovery, and discoverer. The information in each element’s box as well as the legends are in five languages — English, French, Italian, Spanish, and German.

Being a poster, it came rolled in a tube — and that’s how it stayed, much to my husband’s dismay. Until a few years later, when he framed it and regifted it to me, then took it to my office and hung it for all to admire. 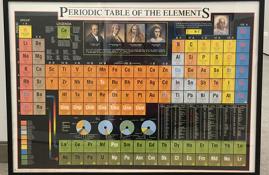 I brought it with me to the new office, and even though it hasn’t been hung yet, I keep it handy, and we do refer to it periodically (pun intended).

Another aid for learning the elements, though not in order, is The Elements song, written by Tom Lehrer and set to the tune of the Major-General’s Song from Gilbert and Sullivan’s The Pirates of Penzance. “There’s antimony, arsenic, aluminum, selenium, / And hydrogen and oxygen and nitrogen and rhenium, / And nickel, neodymium, neptunium, germanium, / And iron, americium, ruthenium, uranium …” When Lehrer wrote the song in 1959, only 102 elements (up to nobelium) were known. As a contingency, he ended the song with: “These are the only ones of which the news has come to Harvard, / And there may be many others but they haven’t been discovered.”

In conducting research for this editorial, I came across all sorts of interesting webpages. For example, I was reminded of the shower curtain in Sheldon and Leonard’s bathroom on The Big Bang Theory when I saw on Imgur “Things you contemplate in the shower if you have a periodic table shower curtain.” The image is a Venn diagram in which one circle has the chemical elements and the other has the U.S. states. How many in the intersection can you come up with? Hint: There are 16. Click here to see the image.

I had the most fun exploring YouTube. (If only YouTube was around when Chris and I took chemistry! We might have been an Internet sensation.) There are numerous interpretations of Lehrer’s The Elements — including one by Daniel Radcliffe (aka Harry Potter), a video of Jim Parsons (aka The Big Bang Theory’s Sheldon Cooper) reliving his rendition of it with Conan O’Brien, and my favorite, six-year-old genius Arden Hayes performing on Jimmy Kimmel Live. A different song, Elements — A Rap, covers only the first 20 elements, but it goes into more detail about them, explaining: “We can’t pretend that the elements / Are organized so randomly / Think about the e-lec-trons, e-lec-trons, e-lec-trons” and “a period is just a term for a row they have the same shell where all the electrons go.” Chemistry students trying to memorize the elements in order today can use as their mnemonic one of the newest videos, “The NEW Periodic Table Song (In Order)” by asapSCIENCE.

I could go on and on … In fact, an expanded version of this editorial appears online at www.aiche.org/cep, with links to the videos, a trivia quiz, and the Discover list. As it turns out, I did know some of the 20 things on the Discover list, and I’m sure you will, too. Have fun.

Some materials are more vulnerable to supply disruptions than others. Identify these materials and implement strategies to address challenges related to them.

This article introduces the thermodynamic property models that are commonly used in process simulators to perform solid-liquid equilibrium and solid-supercritical fluid equilibrium calculations.

Save Energy through the Superior Energy Performance Program

Facilities have improved their energy efficiency by implementing the ISO 50001 energy-management standard and participating in the U.S. Dept. of Energy’s SEP program. Here’s how your facility can earn SEP certification while reducing its energy use and saving money.

The energy efficiency improvement potential of chemical processes is often overlooked. A process flow diagram review is the first step toward reducing your plant’s energy consumption.

Globalization has changed the landscape of global manufacturing and supply chains, creating huge opportunities for more efficient production of goods and services, but also significant sustainability issues. One such challenge is the waste of packaging materials throughout the supply chain. Northern...

This is an expanded version of the Editorial that appeared in the print version of Chemical Engineering Progress, September 2014.Whenever I come across an interesting article or tidbit of information in the general media that I think might make a good topic for an editorial, I file it away. Then,...

CEP: YPOV - Anything Can Change, But Not Everything Must

Good morning! Or should I say good evening? The sun is just setting as I write this in Mangalore, India, where the time leads the U.S. by half a day. By the time this article is printed, India Standard Time will join the growing list of time zones in which I used to live. My employer, the refining...

CEP: Process Safety Beacon - What is Your Role in Hazard Identification and Risk Analysis?

This month's topic is pumps.

Forward-looking perspectives on the always-evolving chemical engineering field will be framed by examinations of the discipline’s fundamentals when AIChE takes its 2014 Annual Meeting to Atlanta, GA.

Engineering processes, operating units, and equipment are designed with clear objectives and usually operated under well-controlled circumstances as designed. However, for emerging situations that are not factored into the design, data become indispensable assets in decision-making for safe and...