On a cold day in Seal Sands, Teesside (U.K.) in January 1976, a road tanker exploded and released glacial acrylic acid (GAA), injuring five workers. Prior to the explosion, workers filled the truck with 14,500 lbs of GAA and fed a steam-water mixture into the coil at the bottom of the truck to prevent the monomer from freezing. The explosion occurred soon thereafter. It may surprise some readers that a simple act of filling a tanker with monomer and then warming it could have led to an incident (1, 2). What went wrong?

It was later determined that when GAA was first pumped into the truck, the material that first contacted the very cold bottom of the trailer froze (GAA freezing point is 15°C). As it froze, the inhibitor that keeps the GAA monomer stable migrated to the bulk liquid GAA, leaving the frozen portion uninhibited. When this frozen GAA, now depleted in inhibitor and in direct contact with the heating coils, was warmed by the 60°C steam/water mixture in the coils, it polymerized exothermically, which was accompanied by vigorous heat release. The rate at which heat was released from the polymerizing GAA far exceeded the rate at which heat could be dissipated from the tank’s surface, leading to a rise in bulk temperature and subsequent polymerization of the entire GAA mass in the tank. The rising temperature led to the tank over-pressurizing and exploding.

The tank of GAA experienced what is known as a thermal runaway. Figure 1 depicts the self-sustaining chain of events that typically lead to thermal runaway situations. 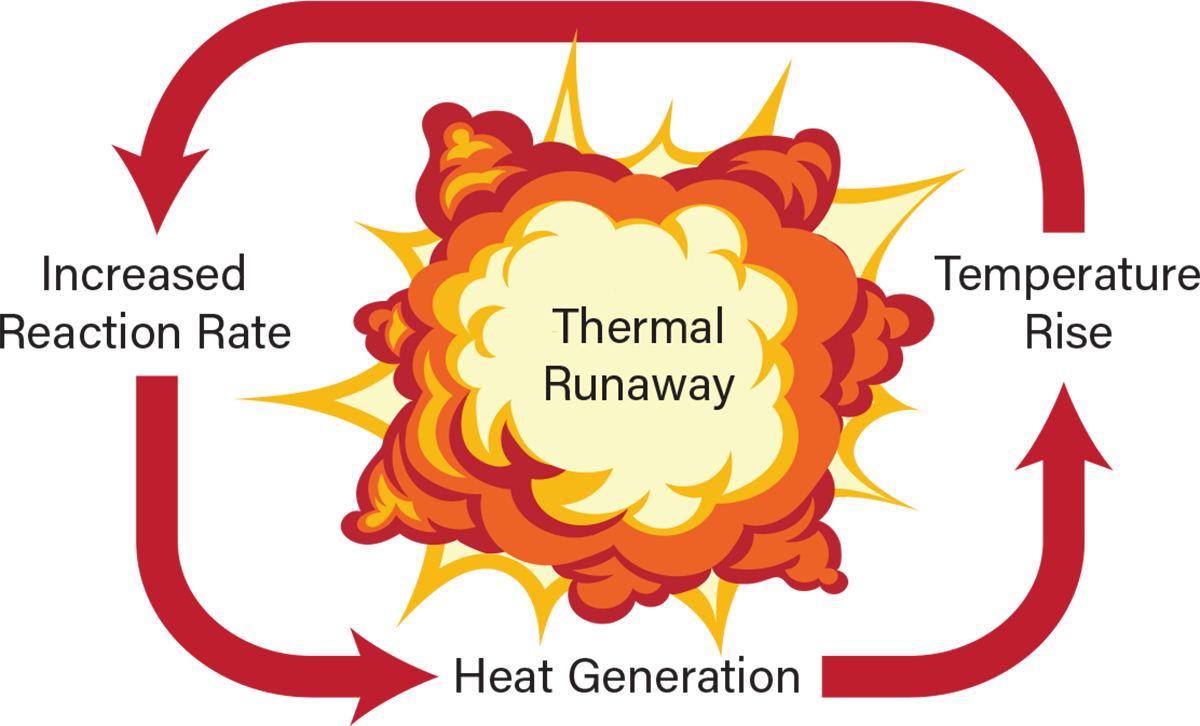 ▲Figure 1. This self-sustaining chain of events can lead to a thermal runaway.

Identifying and analyzing the interplay of these complex phenomena and then suitably mitigating them would have been key to avoiding this incident. Today, such analyses, commonly referred to as thermal hazard assessments, are routinely performed in the chemical process industries (CPI) to prevent such incidents from occurring (5–7).

Thermal hazard assessments require the application of a broad range of technical competencies, including chemistry, transport phenomena, kinetics, and thermodynamics. The CPI approach such assessments in a variety of ways; they may employ specialized experts in reactive chemicals hazards who apply all of these disciplines, or they may use a group approach that involves experts in each field contributing to the hazard assessment exercise (8, 9). Regardless of who is working on the problem, the scientific concepts underlying such assessments are the same, and such assessments typically entail two crucial steps. The first step involves quantifying (experimentally or theoretically) the magnitude and rate of heat that could be released under a given scenario. Following this, the next step entails drawing on this information to evaluate the scenario at the plant scale.

In the following sections, this article introduces the concept of thermokinetic measurements and discusses some of the potential challenges underlying thermal hazard assessments during the aforementioned steps...

How to Leverage Attorney-Client Privilege for Effective Incident Investigations

In the aftermath of a major accident, leveraging attorney-client privilege during the incident investigation can help facilitate frank and open discussions regarding the event while protecting confidentiality.

Drawing a More Inclusive Future: Breaking Down Gender Biases in the Workplace

Solving the gender equity issue in engineering will require deliberate and systematic effort on many fronts.

How to Prepare for the ChE Undergraduate Enrollment Trend

Enrollment of undergraduate chemical engineers follows a cyclical pattern. Academic administrators and industry hiring managers should prepare now for the next decline in enrollment.

Nationally, the ChE BS graduation rate fluctuates from high to low over a period of about 15 years.

A new method of HPLC gives scientists the ability to quantify unknowns or compounds without standards.

Even if not spark-scattering, the use of electrical tools is hot work!

Emerging Voices: Turn on the Stereo: Engaging in Mentorship from all Directions

Will you be my mentor? Take a team approach to mentoring.

Three key questions should be considered in assessing program performance.