Difficulties arise when compounds cannot be identified (i.e., unknowns), standards are not available, or compounds are not easily detected — for example, compounds that do not ionize nor absorb light. In these cases, scientists are forced to estimate concentrations until standards can be made or to utilize time-consuming and expensive alternatives such as nuclear magnetic resonance.

Researchers at Activated Research Company (ARC, www.activatedresearch.com), a Minnesota-based small business funded in part by the National Science Foundation (NSF), have developed a new detector, the Solvere, that gives scientists the ability to quantify unknowns or compounds without standards. It also responds to many compounds that do not absorb light or ionize well because of its unique method of detection, opening possibilities of what can be measured with HPLC. 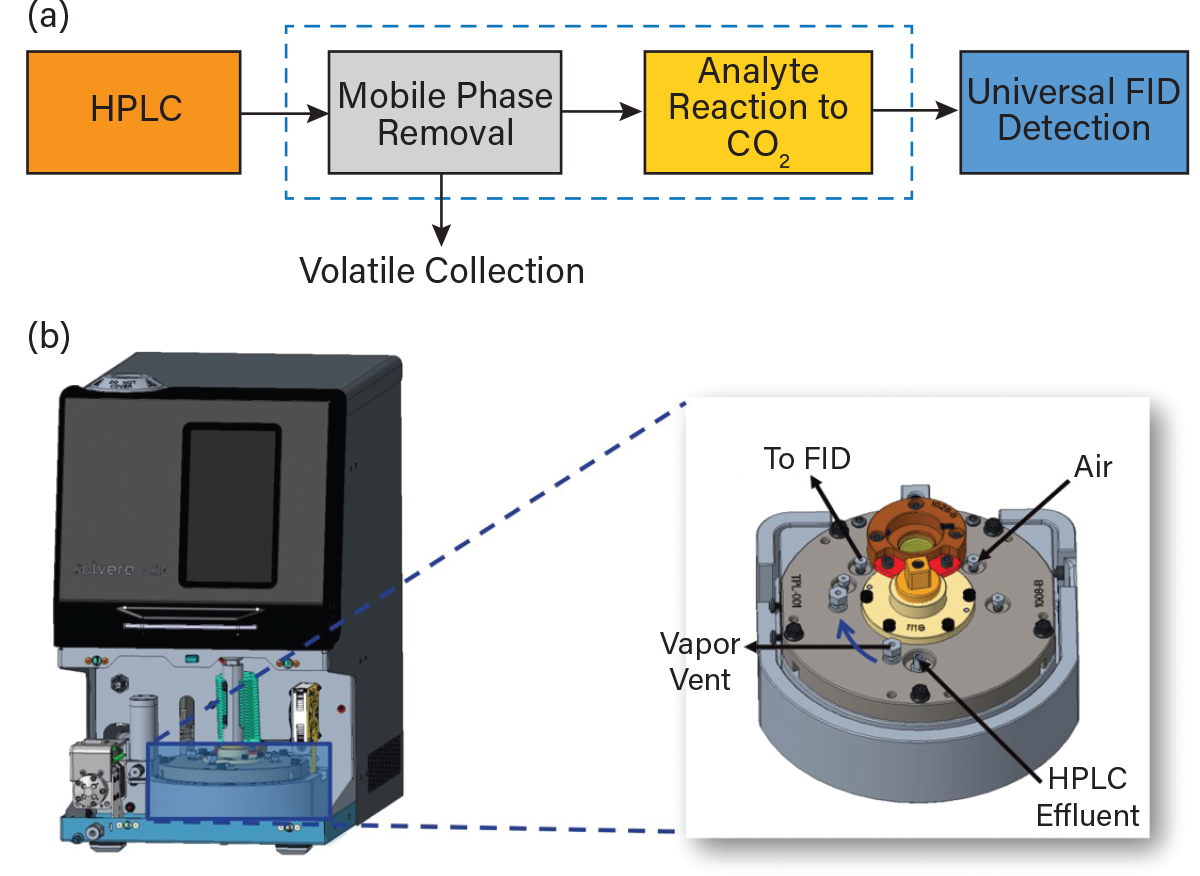 ▲ (a) Activated Research Company’s (ARC’s) novel detection process begins with mobile phase removal of high-performance liquid chromatography (HPLC) effluent, followed by laser-activated photocatalytic oxidation of analytes to CO2. The resulting CO2 is detected by a flame ionization detector (FID). (b) This CAD model of Solvere shows the reaction cell with inlets and outlets, a laser window, and an internal rotating disc (not pictured) where analytes are deposited and reacted.

Solvere’s method of detection is based on measuring the carbon dioxide evolved from a laser-activated photocatalytic oxidation of analytes. In the Solvere, HPLC effluents that contain compounds of interest are deposited onto a rotating disc. Mobile phases and additives are thermally evaporated so they do not saturate detector signals. The disc contains specialized surface treatments with photocatalysts that are engineered to adsorb and catalyze the combustion of analytes to CO2 in the presence of a laser at a specific wavelength. The resulting CO2 is then measured by a flame ionization detector (FID), which is equipped with a catalytic reactor that converts CO2 into CH4 for increased sensitivity.

Prior attempts to couple flame ionization detection with HPLC failed to reach commercial success because of poor performance, robustness, and safety concerns. Advances in laser and catalytic surface technology pioneered by ARC, as well as computer-guided control, have enabled the development of this innovation. Specifically, miniaturized high-powered lasers and precision optics have replaced dangerous hydrogen-oxygen flames used to combust analytes. Specialized photocatalysts were developed to efficiently convert a wide variety of analytes, while being resistant to catalyst poisons.

The new detection scheme is finding applications in polymer development, drug discovery and impurity quantitation, drug excipient analysis, biomolecule analysis (e.g., proteins, DNA/RNA, and monoclonal anti-bodies), and sugar analysis. In polymer analysis, the technology is for the first time allowing scientists to measure the copolymer ratio as a function of molecular weight. The Solvere is also aiding scientists in the measurement of carbohydrates and sugars in biologics and food, where unknowns and limited standards previously caused issues with measurement accuracy.

The technology received the 2021 R&D 100 Award in the analytical and testing category and the Analytical Scientist’s Innovation Award, where the judges remarked: “Quantification of HPLC peaks of unknowns or of compounds for which no standards were available has previously resulted in numerous errors. Now, every compound can be quantified, taking away subjective assumptions and large errors.” The Solvere is commercially available from ARC in the U.S. and is coming to global markets in 2023.

This technology was funded in part by the NSF Small Business Innovation Research (SBIR) Program.

How to Leverage Attorney-Client Privilege for Effective Incident Investigations

In the aftermath of a major accident, leveraging attorney-client privilege during the incident investigation can help facilitate frank and open discussions regarding the event while protecting confidentiality.

Drawing a More Inclusive Future: Breaking Down Gender Biases in the Workplace

Solving the gender equity issue in engineering will require deliberate and systematic effort on many fronts.

How to Prepare for the ChE Undergraduate Enrollment Trend

Enrollment of undergraduate chemical engineers follows a cyclical pattern. Academic administrators and industry hiring managers should prepare now for the next decline in enrollment.

Nationally, the ChE BS graduation rate fluctuates from high to low over a period of about 15 years.

A new method of HPLC gives scientists the ability to quantify unknowns or compounds without standards.

Even if not spark-scattering, the use of electrical tools is hot work!

Emerging Voices: Turn on the Stereo: Engaging in Mentorship from all Directions

Will you be my mentor? Take a team approach to mentoring.

Three key questions should be considered in assessing program performance.