The American Institute of Chemical Engineers celebrated the contributions of the company Moderna and showcased the good works of chemical engineers and their employers at the 2021 AIChE Gala, held Dec. 1 at The Metropolitan Club in New York City. A livestream of the gala program was available for those who could not attend the in-person event.

Moderna was recognized “for leadership in the discovery and development of innovative solutions that have saved and improved lives through healthcare” — in particular, for its work with messenger RNA (mRNA) and the related development of the company’s vaccine for COVID-19. The honor for Moderna was accepted by Stéphane Bancel, the company’s Chief Executive Officer.

In accepting the recognition, Bancel said “The past twenty months have been both historic and life changing — as we have come together across business, education, and government to make what is proving to be a profound impact. At Moderna, we feel a deep sense of responsibility and pride in being part of a solution.” He added, “As we near the end of 2021, I continue to be humbled by the role our team has played to serve humanity.”

The gala also featured the presentation of AIChE’s Doing a World of Good Medal to the leaders of three organizations that partnered with AIChE to establish and launch the Future of STEM Scholars Initiative (FOSSI).

A collaboration of AIChE, the American Chemistry Council, Chemours Company, and HBCU Week Foundation, FOSSI provides scholarships of $40,000 over four years, along with mentorship, leadership training, and internship opportunities with sponsoring companies, to students majoring in science, technology, engineering, and math (STEM) at Historically Black Colleges and Universities (HBCUs). 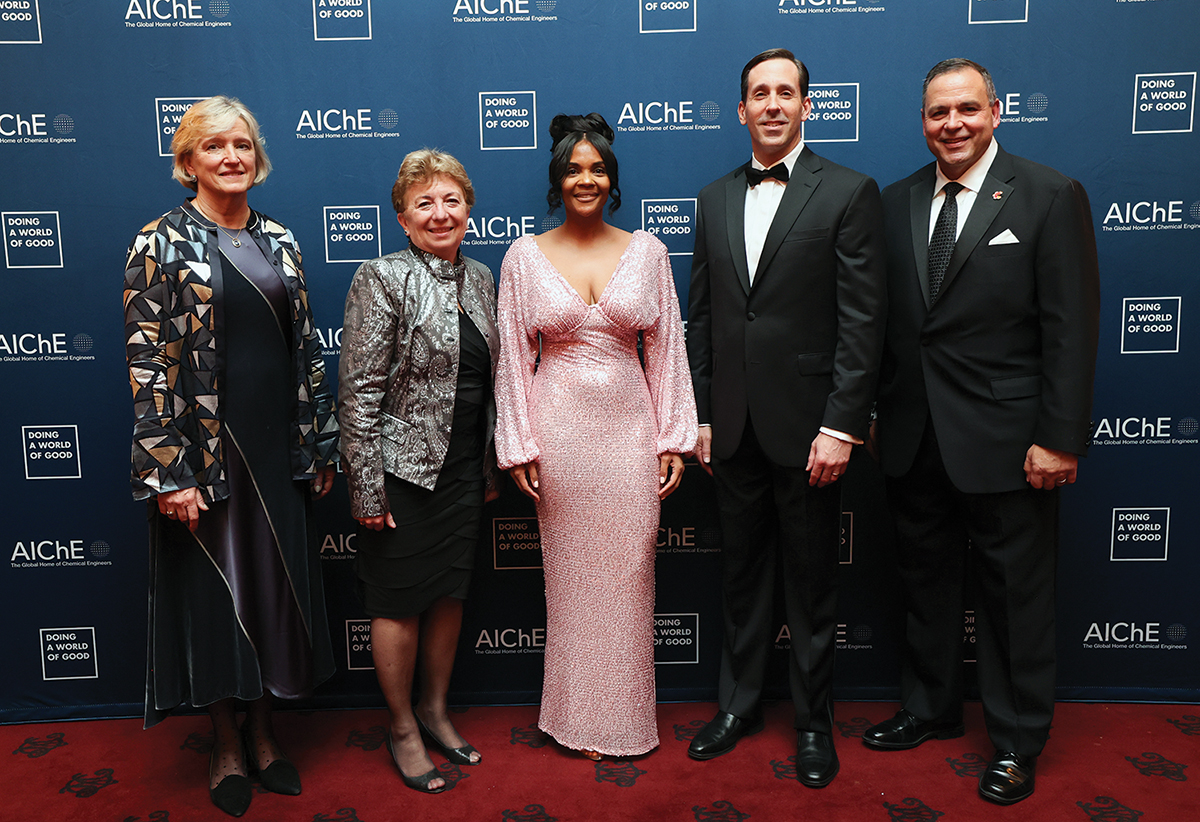 In its inaugural year of 2021, FOSSI provided funding to 151 STEM scholars, pursuing 17 majors at 26 different HBCUs. To date, more than $15 million has been raised from 45 organizations to underwrite FOSSI scholars — with a goal of supporting 1,000 scholars by 2025.

In her remarks at the gala, AIChE’s Executive Director and Chief Executive Officer June C. Wispelwey lauded the founding partners of FOSSI. “Since its launch last year, the Future of STEM Scholars Initiative has been important for improving diversity throughout the STEM workforce. It points to a brighter future for those within the engineering profession — not just for the FOSSI scholars but also for our companies and the STEM professions overall,” said Wispelwey. She added, “FOSSI is something that all of its supporters can take pride in — and we thank you for being a part of it.”

The 2021 AIChE Gala raised more than $530,000 to underwrite programs to attract and retain students from underrepresented groups to the STEM professions; to foster a more equitable and inclusive workforce; and to improve the general public’s understanding of the importance of science and technology in modern life.

The annual gala supports these and other transformative priorities of the AIChE Foundation and its Doing a World of Good campaign, which focus on advancing chemical engineering and bringing that expertise to bear for the good of society. To date, the campaign has raised more than $30 million toward those objectives.

For more information about AIChE’s 2021 Gala, including a photo gallery and details about its honorees and supporters, visit www.aiche.org/gala...

Avoid some common stumbling blocks when solving both simple and complex problems.

Avoid these common problems during a research hazard analysis and risk assessment (HARA) to effectively evaluate hazards in pilot plant and laboratory operations.

When designing lagoons and landfills, it’s important to understand how clayey soil formed and changed during its geologic past, as well as how containment potential is evaluated.

The New Year gives us a chance to reflect on the things that we’ve accomplished, and look forward to the things we plan to do in the future.

ChE in Context: Building Blocks for Contributing to Public Affairs Within AIChE

Chemical engineers are vital to creating innovations that address some of the world’s biggest challenges.

Drawings and procedures should be accurate, up-to-date, and followed.

Process electrification is emerging as a viable tool for decarbonizing the chemical process industries.

Spotlight on Safety: Don’t Rob the Pillars of Your Safety Programs

Robbing the pillars in coal mines provided additional financial gain, but taking away too much could lead to roof collapse and injury.

AIChE Gala Celebrates the Extraordinary Societal Contributions of Organizations and Leaders; President's Message: Advancing AIChE — What is Our "Next"; 2021 AIChE Annual Meeting in Review; Introducing some of AIChE's recently elected fellows