A major hurdle in large-scale biofuels deployment is the necessary extensive chemical upgrading of intermediates derived from biomass feedstocks. Such biomass refining technologies are nascent or in conceptual stages. In contrast, crude oil is peerless as a feedstock for liquid fuels, and petroleum refining is mature and optimized.

Nonetheless, a few opportunities do exist for the industrial utilization of biogenic carbon. One such area is the synthesis of oxygenated hydrocarbons. Oxygenates play a key role in petrochemicals, and they are expensive to produce via relatively nonselective oxidative functionalization of hydrocarbons. However, the oxygen and reactivity that are inherent in biomass can be leveraged to produce the same chemical species.

Generally, as the oxygen content in a chemical increases, biomass becomes more attractive as a feedstock. Of course, a facile synthetic pathway alone is not sufficient; chemicals are only viable commercial targets when demand exists. However, if a biobased technology can satisfy the dual criteria of competitive advantage and robust market, there is potential for near-term deployment.

Along these lines, a team from Syracuse Univ., funded by the National Science Foundation (NSF), elucidated a strategy for the production of biobased maleic anhydride. The strategy uses supported vanadium oxides to convert levulinic acid, a sugar derivative, into maleic anhydride at around 75% yield. “For this to work, you have to selectively break the terminal C-C bond in a methylketone, which is not generally observed in gas-phase oxidations,” says Jesse Bond, professor of biomedical and chemical engineering at Syracuse Univ. 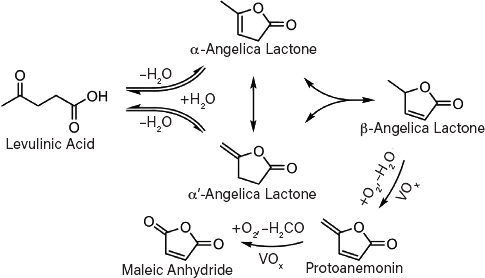 ▲ The reactions that occur during the oxidative scission of levulinic acid produce maleic anhydride with single-pass yields of up to 75%.

To explain the unexpectedly high yields of maleic anhydride, the team — led by Ran Zhu — considered aerobic, oxidative scission reactions for a family of substrates (1). Through detailed analysis of selectivities, reaction kinetics, vibrational spectra, and nuclear magnetic resonance (NMR) spectra, they were able to map the levulinic acid oxidation pathway and identify maleic anhydride as a quaternary product.

The high selectivity toward maleic anhydride stems from levulinic acid’s bifunctionality. Specifically, it is a γ-ketoacid, so it dehydrates to form α- and α′-angelica lactones, which isomerize to a thermodynamically favored β-isomer. Once formed, β-angelica lactone undergoes facile, irreversible oxidative dehydrogenation to form protoanemonin, a conjugated diene. Given its structure, protoanemonin is susceptible to oxidative scission only at its terminal, C4-C5 bond, so it forms maleic anhydride exclusively upon oxidation. High maleic anhydride selectivity in this system thus arises from a cascade of kinetically and thermodynamically favorable reactions that are unique to levulinic acid.

In addition to building mechanistic insights, the researchers made a serendipitous discovery: protoanemonin is a sufficiently stable intermediate in this sequence that it can be isolated in appreciable yields (50–60%) under certain reaction conditions. This is a potential opportunity for biochemical producers.

John Regalbuto, Director of the Center for Rational Catalyst Synthesis, commented: “In his recent papers unveiling the production of maleic anhydride from already-oxygenated biomass as an alternative to oxygenating butane, Prof. Bond indeed demonstrates a biomass conversion process with a competitive advantage and a robust market. The catalysts employed are simple and cheap, which can only enhance the product’s commercial potential.”

This research was funded through the Catalysis Program at the NSF Division of Chemical, Bioengineering, Environmental and Transport Systems (CBET).

Characterizing the structure and activity of next-generation heterogeneous catalysts will be critical to unlocking more sustainable reaction-driven processes.

The optimal bonsai tree can only be cultivated by pruning certain limbs and leaves. The same disciplined decision-making is required to eliminate the extraneous options in process development.

A Look at Vortex Flowmeters

Out with the old and in with the new — vortex flowmeters have become a popular alternative to differential pressure flowmeters across the chemical process industries.

Shift research and development efforts to an open innovation framework to capture and capitalize on valuable ideas from customers and other stakeholders.