Valves are often specified as fail-open, fail-closed, or fail-in-last-position on piping and instrumentation diagrams (P&IDs) or other process safety information (PSI). These designations indicate the valve response in the case of utility failure, such as loss of instrument air or electric power failure. 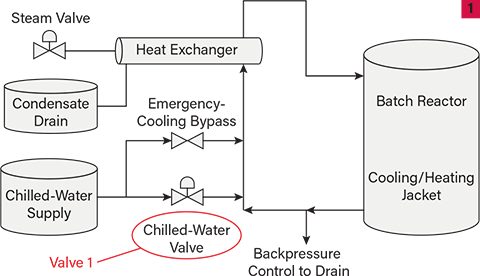 ▲ The reactor cooling system controlled the chilled-water flow with a fail-open valve (Valve 1). The valve was designed to fail open so that cooling water could flow even in the case of utility failure.

An incident occurred with a batch reactor when a fail-open valve in the cooling system did not fail in the open position as intended. The temperature of the batch reactor was maintained with a heat exchanger and jacket system that used steam as the heat source (Image 1). When the batch contents reached the required reaction temperature, steam was shut off and chilled water was sent to the heat exchanger to control the reactor temperature. The chilled-water flow was controlled by a fail-open valve (Valve 1) that required instrument air pressure to close.

On the day of the incident, the reactor temperature began to increase, signaling a high-temperature alarm. The operator observed that the signal on the control screen to Valve 1 was fully open. However, the reactor temperature continued to increase, eventually triggering another alarm, indicating low cooling water flow. The operator was unable to troubleshoot the problem over a 7-min period and did not open the emergency cooling bypass to increase cooling water flow to the reactor. The emergency shutdown system intervened and dumped the reactor to a containment pit, causing an environmental release. There were no injuries.

▲ These images show the chilled-water control valve positions when open (Image 2a) and closed (Images 2b and 2c). In Image 2c, the valve is closed but signalling as open because the mechanical linkage that connected the valve actuator to the positioner was broken.

Be aware that valves can fail to operate as intended!

©AIChE 2020. All rights reserved. Reproduction for non-commercial, educational purposes is encouraged. However, reproduction for any commercial purpose without express written consent of AIChE is strictly prohibited. Contact us at ccps_beacon@aiche.org or 646-495-1371.

Quickly estimate the power consumption of a cryogenic air separation unit using your calculator, instead of your computer. ...

An effective loss-of-containment (LOC) reduction program should identify and assess the chemical hazards present in the facility and consider the potential for equipment failure and human error. ...

An effective loss-of-containment (LOC) reduction program should identify and assess the chemical hazards present in the facility and consider the potential for equipment failure and human error. ...

Is Your Pressure Drop Really Quadratic?

Gain a conceptual understanding of pressure drop correlations to check and interpret results from simulators and spreadsheets. ...

Make control valves a focal point for improvements to process performance and economics. ...