Evaporation and distillation are energy-intensive thermal separations that drive industrial manufacturing. In fact, these thermal separation and purification technologies consume 12% of all energy produced in the U.S. In a typical chemical process, more than 70% of the cost is driven by separations, which makes it extremely attractive as a target for process intensification.

Although using membranes for physical separation is not new, very little progress has been made in the development and scaleup of robust, versatile, and low-molecular-weight-cutoff membranes that can be used for chemical purification. If membranes were to replace all thermal separation systems, it would eliminate 10% of domestic energy consumption, saving $20 billion in annual energy costs. 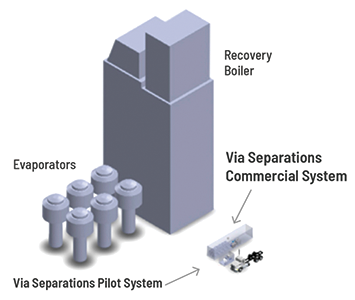 ▲ The Via Separations membrane system can concentrate the black liquor in a paper production process. It occupies only a small footprint within the paper mill, but allows a capacity increase of 10% through the existing evaporator train.

With funding from the National Science Foundation’s Small Business Innovation Research Program (SBIR), Via Separations is commercializing a membrane technology invented at the Massachusetts Institute of Technology (MIT) that can be applied to a diverse range of separation and purification processes. The Boston-based company uses graphene oxide, which is both physically and chemically robust, as a scaffold material. Graphene oxide flakes have hydrophilic surfaces that inhibit fouling and encourage faster flow. The graphene oxide flakes serve as the backbone for a multilayer membrane that can be manufactured at large scale from solution. The selectivity of such membranes depends on the distance between the flakes.

Although graphene oxide membranes have been reported in the literature, Via’s discoveries pave the way to commercialization. Via has successfully scaled up the manufacture of its membranes. They have also integrated their flat-sheet membranes into a product configuration for field trials and demonstrated its efficacy on real feed streams in their lab. Via is currently focused on liquid-liquid separations, but is collaborating with MIT on gas separation for future applications.

“A major reason that our investment group has been enthusiastic about Via’s future prospects is their ability to support multiple industry applications and provide that always elusive platform technology to maximize impact,” says Arunas Chesonis, Managing Partner of Safar Partners Fund, one of Via’s investors. “Via goes places where no membranes have gone before.”

The company envisions deploying their membranes in many industrial processes, such as ingredient fractionation for nutrient enhancement in food and beverage applications, solvent recovery in semiconductor fabrication, and sulfate removal in oil and gas facilities. For now, their main focus is the pulp and paper industry.

Consider kraft pulping, a process by which wood is converted into wood pulp, the main component of paper. During this process, approximately two pounds of solids are washed off fresh pulp. That caustic, high-temperature wash water — called black liquor — initially contains about 10% solids, but is boiled in a series of evaporators until it consists of 70% solids. The boiling step accounts for 2.5% of U.S. energy consumption.

A hybrid process incorporating Via’s nanofiltration membranes could halve the energy required for boiling in the forest products industry — eliminating up to 100 million metric tons (m.t.) of carbon emissions per year.

Most commercially available membranes would melt at the high boiling-process temperatures (up to 90°C), as well as foul with dissolved organics and degrade in the high pH of 12 to 14. However, Via’s membranes can withstand these conditions. This translates to major improvements in the bottom line: a pulp and paper mill could expect to see a 50% reduction in the cost of concentration.

Via plans to pilot their membranes in the field later in 2020 to demonstrate both the technical and economic benefits of the technology at a commercial-ready scale. Customers will have the opportunity to augment their existing infrastructure, debottleneck their evaporation-limited pulp and paper plants, and reduce operating costs.

You would expect that replacing an old piece of equipment with a new, seemingly identical one would result in better performance and higher efficiency. But that is not always the case. When it comes to reboiler tubes, old is sometimes better than new.

Many factors — both work-related and personal — can cause workers to become fatigued, which can contribute to safety incidents. A strategic approach to fatigue-hazard identification and risk mitigation can prevent or reduce adverse outcomes.

Transitioning to a Leadership Role

The skills that make engineers and scientists successful in a technical role are not the same as those required by leadership positions. To be effective leaders, technical experts must expand their skillset to manage time efficiently, communicate clearly, and overcome conflict.