Each year, the roughly 200 industrial ethanol plants in the U.S. collectively produce about 30 million metric tons (m.t.) of a low-value wastewater stream called stillage, which contains water-soluble organics and corn fiber residues. Disposing of stillage is problematic. However, Xylome, a small business based in Madison, WI, has developed a way to use the waste stream as a consistent, stable feedstock for conversion to valuable products. The company has genetically engineered a novel yeast to enable this transformation.

Based on market surveys with ethanol producers and potential end users, Xylome found an opportunity to create a new North American industry based on stillage: production of a palm oil substitute. Currently, palm oil is produced almost exclusively in environmentally sensitive tropical regions at unsustainable rates, yet it is found in nearly half of all food products. 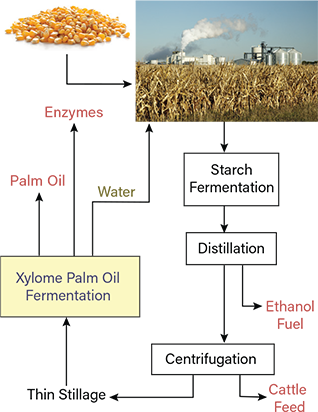 Typically, ethanol producers recover residual protein and corn oil after the distillation process and sell these for supplemental income. However, the stillage stream cannot as easily serve as a source of supplemental income. Stillage solubles are evaporated to a syrup and sprayed back onto distiller’s dried grains; the net value of such a process is only about $0.02/lb. Xylome’s technology enables ethanol producers to convert the stillage waste stream into a high-value, marketable palm oil biosimilar.

Xylome’s technology could diversify the products generated in dry-grind ethanol plants while increasing income, reducing water and disposal problems, and sparing tropical forests. The dissolved solids and fiber alone in U.S. stillage streams could produce about 2 million m.t. of palm oil biosimilar. If this stream were supplemented with additional carbon from starch or cellulosic feedstocks, it could produce more than 25 million m.t. of palm oil. Palm oil plantations have an average yield of 3.3 tons per hectare per year, so Xylome’s process could spare up to 7.7 million hectares of rain forest.

Xylome’s technology is based on Lipomyces starkeyi, a yeast known for 75 years and generally recognized as safe (GRAS). The native L. starkeyi readily consumes a wide range of carbon feedstocks, including amylodextrins, glycerol, xylose, and oligosaccharides found in stillage. The company’s scientists engineered the strain to have a high capacity to produce yeast oil purer than palm oil with properties that would allow the yeast oil to serve as a replacement for palm oil.

Xylome scientists implemented a two-stage bioprocessing approach that includes a rapid growth phase followed by a lipogenic phase. In fed-batch fermentations, engineered L. starkeyi accumulates 85% of its weight as yeast oil with conversion rates up to 85% of the theoretical maximum. The engineered strains can consume all of the organics present in stillage, including the sugars released by enzymatic saccharification of fiber derived from corn hulls and stover. This technology has the potential to double the production of vegetable oils in the U.S. without cultivating or harvesting any additional grain.

The company has developed a scalable process for recovering highly purified palm oil substitute and has initiated the commercial manufacture of specialized lipid body products for cosmetic applications. Now, Xylome is collaborating with major fuel ethanol producers for scaleup and commercialization. Their initial grassroots facility will have a capacity of 3–4 million gal/yr of oil. The palm oil biosimilar is in demand from the largest users of tropical palm oil, so Xylome is seeking backers for the first commercial-scale demonstration plant. It was recently awarded U.S. Patent 10,662,448-B2 on the genetically modified yeast and is currently developing commercial production of specialty products based on this technology.

Ventilation is an effective means to mitigate potentially hazardous atmospheres, enabling its use to lower the area electrical classification of pilot plants and laboratories.

Use molecular analysis to reveal hidden value during process development.

Save time and your sanity — know where to look for pressure-relief system design information.

Ammonia is one of the most commonly produced chemicals globally. Efficiently removing it from wastewater streams could allow it to serve as a source of revenue in many applications.

How to Innovate During a Crisis

Even during a crisis like the COVID-19 pandemic, organizations must show that they can innovate and serve their clients. Follow these steps to revitalize your innovation process.

As we recover and learn from the current pandemic, the U.S. must recognize the potential for another crisis and focus on manufacturing competitiveness, supply chain security, and workforce development.

Explore our selection of new books for August 2020.

Decluttering and organizing can help you clear your brain and focus on the tasks you want to accomplish.

Editorial: Normalization of Deviance in the Time of COVID-19

In the chemical industry, the accumulation of small deviations can lead to a catastrophic process safety event.

The article debunks common distillation misconceptions, discusses several recent developments, and advocates for changes to teaching practices for separation technologies to better prepare the next generation of chemical engineers.

Before and during hot work, lower flammability limit (LFL) measurements of flammable vapors should be monitored within a 35 ft-radius around the location of the hot work itself, as well as all locations below that radius.

Profile: Finding the Fun in Entrepreneurship

Entrepreneurship is 10% idea, 10% luck, and 80% perseverance and grit, says Ryan Chan, founder of the mobile application UpKeep, which aims to transform the way that industrial plants run their facilities.

Employees are nine times more likely to make a lockout/tagout error when they are rushing.