This article is based on a presentation given at the 2018 AIChE Annual Meeting in Pittsburgh, PA.

The dividing-wall column (DWC) implements process intensification (PI) principles. The next step of PI could be the dual-dividing-wall column (DDWC) — a single distillation column to replace multiple conventional columns or DWCs in series that could produce up to six high-purity products.

Distillation accounts for approximately half of the energy use at a typical refinery or chemical plant. Dividing-wall columns (DWCs) are an early application of process intensification (PI) principles that thermally and mechanically integrate two distillation columns in series. DWCs can reduce capital cost and energy use by up to 30% (1). Since the first deployment in 1985, DWCs have grown in popularity and now more than 200 operate globally.

Figure 1 shows a simplified configuration of a three-product DWC that contains a vertical partition baffle between the feed zone and side draw to produce three high-purity products. The partition baffle separating the feed from the side product draw minimizes remixing inefficiency (which occurs when the feed stream contaminates the side product) by fractionating the feed into higher-purity intermediate streams that are further separated on the other side of the partition. 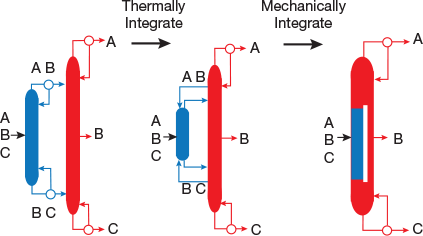 ▲Figure 1. A dividing-wall column (DWC) integrates the thermal and mechanical functions of two columns in series to reduce capital cost and energy use.

The Kaibel column (Figure 2) is an enhancement to the standard DWC design. It includes a packed bed and an additional side draw, increasing the number of product streams to four (2). 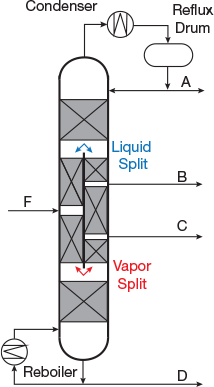 ▲Figure 2. The Kaibel column includes a packed bed between side draws B and C and an additional side draw (C), enabling separation of a single feed stream (F) into four products (A–D). The blue and red arrows indicate the liquid and vapor splits, respectively.

PI research has progressed to evaluate further advancements to DWCs. Multiple partitions within a dividing-wall column, called a multipartition DWC (MP-DWC), could further increase the number of distilled products (Figure 3), but design complexity increases as the number of liquid splits above the wall and vapor splits below the wall increases (3–5). 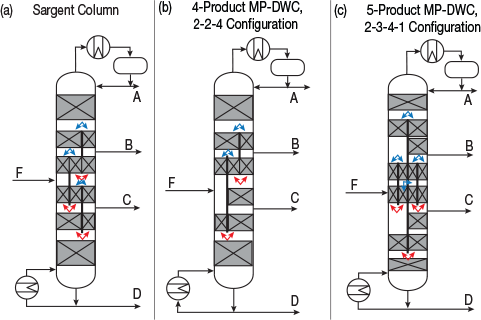 The dividing-wall column (DWC) implements process intensification (PI) principles. The next step of PI could be the dual-dividing-wall column (DDWC) — a single distillation column to replace multiple conventional columns or DWCs in series that could produce up to six high-purity products. ...

Equipment in a toll manufacturing facility must be designed to handle many different chemicals and processes. This article offers advice for sizing pressure-relief devices for such applications. ...

Controlling Nitrogen and Phosphorous in Wastewater