Sourcing uncommon minerals needed to make common products just got much easier. A research team at the Center for Resource Recovery and Recycling (CR3), one of the four research centers within the Metal Processing Institute at Worcester Polytechnic Institute (WPI), has developed a simple, eco-friendly method of extracting rare earth metals from old electric motors and generators. The technique promotes a circular economy and reduces the need to buy rare earth minerals, which can have widely fluctuating prices.

“If we can close the loop on materials that are technologically relevant, we’ll see many benefits in terms of sustainability,” says Marion Emmert of WPI. The prime goal of CR3 — an Industry-University Cooperative Research Center funded by the National Science Foundation — is to make products sustainable from design through end-of-life.

Although the average consumer may have never heard of rare earth metals, such as yttrium, praseodymium, neodymium, and dysprosium, they are found in familiar products, such as cell phones, rechargeable batteries, fluorescent lights, and electric motors and generators. Acquiring these minerals is not easy because the U.S. lacks large mineable deposits of rare earths and manufacturers must rely on imports from foreign markets. 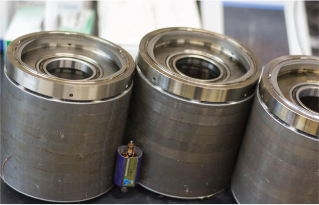 Therefore, manufacturers are motivated to reuse materials that would otherwise go to waste. General Motors, for instance, approached CR3 looking for a way to recover rare earth metals from electric motors. Although a system already existed to dismantle, shred, and recycle steel, copper, aluminum, and other common car parts, no one had figured out how to recycle electric motors. “The rare earths were essentially being thrown away,” says Emmert.

While brainstorming a solution, Emmert, a professor of organic and inorganic chemistry, recalled a classroom activity that asked students to classify metals based on their potential to be dissolved in mineral acids. She already knew that gold, silver, and copper did not react with these acids and she wondered if rare earth metals might. Sure enough, she found videos online showing rare earth metals dissolving in weak acids.

It raised a question, says Emmert: “Can we find conditions under which we can dissolve just the rare-earth-containing materials, while keeping intact other metals, such as copper and steel, that are valuable in their own right?” 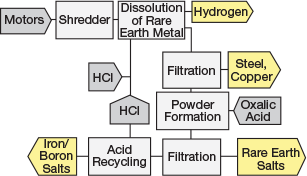 ▲ The WPI team put the motor through an industrial shredder, which produced 1-in. bits of steel, copper, iron, and other metals covered in rare earth minerals. They mixed the bits with diluted hydrochloric acid and let the mixture sit for a couple of hours. Filtering out the metal parts revealed a grass-green liquid. To that, they added oxalic acid, which reacted with the rare earth elements and turned them to powder. The powder of rare earth compounds (salts) can be used as an ingredient in new electric motors.

Using small samples of rare earth magnets, the researchers experimented with different concentrations of a variety of acids, including acetic, sulfuric, nitric, formic, and hydrochloric. Hydrochloric acid worked the best. By collaborating with their WPI colleagues in mechanical and materials engineering, they first baked a Chevy Spark’s electric motor, which was about the size of a gallon milk jug, in an industrial oven at 450°C. The temperature disrupted the magnetic field of the material, demagnetizing it and making it easier to handle. Next, they shredded the motor and treated it with hydrochloric acid to extract rare earth salts (see figure). To fully close the recycling loop, the scientists distilled the hydrochloric acid to remove remaining bits of iron and boron so that the acid could be used again.

Emmert and her colleagues received a patent on the process and have also investigated ways to commercialize it. Building a recycling center that exclusively focuses on electric motors and wind turbine generators could make a U.S.-based rare earth supply chain circular and profitable, boosting sustainable energy generation. They are raising funds to develop the first pilot plant that would create a closed-loop rare earths system that would benefit not just General Motors, but other automotive companies and electric motor manufacturers. “There are only so many rare earth elements to go around,” says Emmert.

This technology was funded through the NSF Industry-University Cooperative Research Centers (IUCRC) Program.

The dividing-wall column (DWC) implements process intensification (PI) principles. The next step of PI could be the dual-dividing-wall column (DDWC) — a single distillation column to replace multiple conventional columns or DWCs in series that could produce up to six high-purity products. ...

Equipment in a toll manufacturing facility must be designed to handle many different chemicals and processes. This article offers advice for sizing pressure-relief devices for such applications. ...

Controlling Nitrogen and Phosphorous in Wastewater