A dividing wall can be added within a distillation column to improve separation efficiency of three or more products. 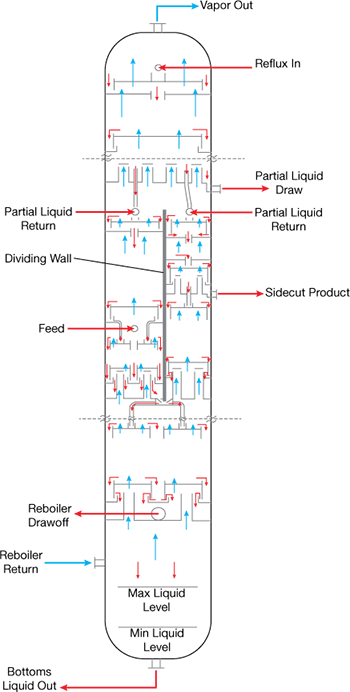 ▲Figure 1. A standard dividing-wall column (DWC) has a wall that separates the column into two sections. The flow of vapor and liquid is shown with blue arrows and red arrows, respectively.

Dividing-wall columns (DWCs) are a type of distillation column that can separate mixtures of several components into three or more high-purity streams (Figure 1). A DWC requires much less energy, capital investment, and plant space than conventional columns in series or parallel configurations. In fact, DWCs can have 20–30% lower capital cost requirements than conventional tower designs (1–5).

Conventional distillation columns are an integral part of the refining and chemical industries. Retrofitting existing columns with a dividing wall to improve separation efficiency is part of a larger push to intensify processes in these industries. Process intensification (PI) targets dramatic improvements in cost and energy efficiencies by rethinking traditional operation schemes. A DWC is one example of an intensified technology.

The concept of DWCs is well established, with much literature focusing on the simulation and control of these columns (1, 6, 7). Several publications have discussed the industrial applications of DWCs in different grassroots and retrofit applications (8, 9).

The technology is quite versatile, and no two DWC applications are exactly the same. Thus, it is difficult to develop a standard protocol for designing these columns. DWCs have been implemented in a variety of applications, such as gas plants, naphtha splitters, and reformate splitters, among others.

This article describes the three basic types of DWCs. An example demonstrates how adding a dividing wall can improve the purity of a side-cut stream without requiring the addition of a second column.

These and other RAPID-funded ventures could transform industry by making chemical processes cleaner, smaller, safer, and more energy-efficient.

A dividing wall can be added within a distillation column to improve separation efficiency of three or more products.

This new approach represents chemical processes as abstract blocks arranged in a two-dimensional grid. Mathematical-programming-based optimization can identify the best design for intensification at the equipment and flowsheet levels.

These tools enable engineers to create a digital twin of a process, which can be key to developing new technologies and testing them virtually at a rapid pace.

Reaction conversion and selectivity can deteriorate as a catalyst ages. Optimize continuous catalyst makeup and replacement rate to improve profitability.

Technical Entity Trends: Entrepreneurship in the CPI: Paving the Road to Innovation

Editorial: Getting Creative with My Writing

Recently, a colleague asked me when I started doing creative writing. That startled me a bit, because I don't think of CEP as a repository of creative writing. Accuracy, clarity, and conciseness take precedence over all else. Then he clarified that he was referring to my editorials. And that made me...

Using Bacteria to Kill Bacteria: A Clean Water Solution; A Robot That Acts Like a Houseplant; Engineers Capture the Sun in a Box; From Liquid to Solid in Seconds: Near-Instantaneous 3D Printing

Chemical engineers often adjust process parameters to improve the conversion, yield, or product purity of a chemical reaction. But, when is improvement to a known reaction enough to qualify for a patent? The recent decision in E. I. DuPont de Nemours & Co. and Archer Daniels Midland Co. (ADM) v....