Leadership Q&A: Inspiring the Next Generation of Engineers | AIChE
Skip to main content

Leadership Q&A: Inspiring the Next Generation of Engineers 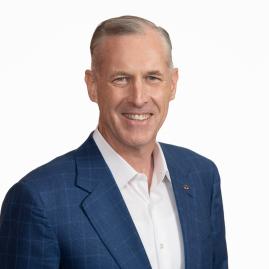 Jim Fitterling, President and Chief Operating Officer of Dow Chemical, received the AIChE Foundation’s inaugural Doing a World of Good Medal at the 2017 AIChE Gala in New York City last month. The award recognized his philanthropic leadership, his advocacy of diversity and inclusion in the workplace, and his commitment to creating positive change in the chemical industry.

Fitterling has worked with Dow for more than three decades and played a central role in the successful completion of the DowDuPont merger. He is an instrumental leader in the establishment of DowDuPont’s three independent publicly traded companies in agriculture, materials science (the future Dow), and specialty products.

Since January 2016, Fitterling has served as co-chair of the AIChE Foundation’s Doing a World of Good campaign. His leadership has been especially critical to the Under-graduate Process Safety Learning Initiative, which is integrating process safety training into the chemical engineering curricula at universities throughout the world.

Fitterling recently discussed how he is inspiring the next generation of engineers through science, technology, engineering, and mathematics (STEM) education initiatives, and he explained Dow’s strategies for establishing and driving diversity and inclusion best practices.

What challenges does the chemical industry face in educating and inspiring the next generation of engineers?

Jim Fitterling: I think one of the difficulties we have today is that people have an out-of-date view of the industry.

Most people, when you talk about chemical engineers, think of an old version of the chemical industry. They think of smokestacks and they think of a dirty place to work. But the industry has greatly improved from an environmental perspective and a safety perspective. Many people really don’t have an appreciation for the level of sophistication of our process capabilities, and the automation and digitalization that are happening in the industry now.

How are you changing that outdated mindset?

Fitterling: We are engaging in several activities to promote STEM education.

When you go to any of the Dow communities around the world, you are likely to see an engagement with us in the area of robotics. We became involved with FIRST Robotics a number of years ago through a contact we made with FIRST [For Inspiration and Recognition of Science and Technology] founder Dean Kamen. It has branched out so that most large Dow communities now have FIRST Robotics teams through the local high schools. A lot of Dow employees mentor and serve as coaches and sponsors for those teams. FIRST gets kids involved at an early age — from middle school on through high school — in hands-on activities. It’s very exciting and fast-paced, and I’d say a very modern way for them to get engaged.

We are working with community colleges, trying to get the curriculum and types of training geared toward our future workforce. And, we’ve re-established an apprenticeship program here in the U.S. very similar to some successful programs we’ve had in Europe for quite a number of years.

We are also working at targeted recruiting. For example, we are recruiting veterans — people with good skills and discipline that they’ve learned from their military assignments — interested in working in technical fields.

Why do you think it is important for industry leaders to be strong proponents of undergraduate process safety education?

Fitterling: One of the most common questions people ask me is, “What keeps you awake at night?” My number one concern is that something bad might happen in a manufacturing environment. The more time you dedicate to process safety and workplace safety, the more at ease you are about the business you are in.

The impact of having an incident or an accident has changed dramatically over the past 20 or 30 years. It isn’t acceptable anymore to run an industry that occasionally has major incidents. If you have a process safety incident, it will have reputational damage.

In supporting undergraduate process safety education, you are making an investment in students’ education as well as the future of the industry.

What role should industry leaders and executives play in encouraging and inspiring women, minorities, and LGBTQ students to pursue engineering?

Fitterling: I think because many people have an outdated view of our industry, they also carry a view or a bias in terms of who works in the chemical industry. That means someone from a minority background, or a woman, or someone from the LGBT community or the disabled community may look at chemical engineering and think, “That’s not a very good workplace for me.” I don’t want them to self-select themselves out of coming to work in the chemical industry because there are tremendous opportunities here.

If leaders don’t go out of their way to reach out and encourage others to join their organizations, people are going to select other opportunities.

What are some of the diversity and inclusion initiatives that you are implementing at Dow?

Fitterling: We have been at this for a while, and we have several right now that we are addressing. The big shift right now at the company is creating an inclusive environment where everybody feels they have a chance for advancement.

We are working on several different things in terms of best practices. The first is increasing executive involvement in each of the areas where we want to improve inclusion. The second is improving measurement and accountability — having some clear and transparent goals for the organization. We are also working on getting inclusion into the corporate infrastructure, rather than it being a diffuse, resource-group-driven activity.

We are leveling the playing field in terms of talent selection. We are also working on sponsorship programs where we connect director-level women with global leaders. So when women start their first management-level jobs in the company, we make sure they have sponsors and direct connections to global leaders to help develop their careers. That helps us with retention and also helps us with sponsoring them to advancement.

We have eight Employee Resource Groups (ERGs), which have been a big part of our progress to this point. Our Employee Resource Group for LGBT and ally employees is our largest ERG. And it sometimes surprises people that it’s larger than our women’s network, our African-American network, and our Asian network. But the reality is that 75% of that ERG’s members are allies — they are friends of LGBT employees, or they have a son or daughter, brother or sister who is LGBT.

Eventually, I would like all of our employee resource groups to be open to allies. If we can do that and increase the participation of all employees in the ERGs, we believe that is a direct link to creating a more inclusive environment.

What is the significance of appointing a Chief Inclusion Officer at Dow?

Fitterling: The Chief Inclusion Officer, Karen Carter, reports independently of the human resources department to me and also to Andrew Liveris [Chairman and CEO of Dow]. It’s a direct way for us to view what things are happening in the organization and how we can drive change.

You must have active involvement in what’s happening at all levels of the organization. The only way to do that is to hire somebody whose full-time job is to engage with the businesses, with your functions, with the different sites, with the employee resource groups, and to drive these activities.

Our Chief Inclusion Officer’s job is to uncover some of the places where we have issues to address and to help drive the changes and the interventions that we need to make. To challenge us on policies and practices. To ask, “What are the things that we are doing well? What are the things that people outside the company and outside the industry are doing well to achieve an inclusive and diverse workforce?”

What are some of the challenges you have overcome as President and Chief Operating Officer of Dow? What are you most excited for in the future?

Fitterling: Around 2009, Dow went through big changes with the failed K-Dow Petrochemicals deal, the Rohm & Haas acquisition, and the economic crisis that we had here in the U.S. We embraced a massive amount of change during that time frame, including portfolio right-sizing in the five years after 2008. In the past five years, Dow has delivered 20 consecutive quarters of year-over-year earnings and EPS [earnings per share] growth.

That’s a massive amount of change for an organization in a lifetime, but that’s just been what we’ve been through in the past ten years. And, in that process, we created the opportunity to do this merger of equals with DuPont.

I am really proud of how well the organization is embracing the Dow of the future — the new materials science company. We are using digitalization not only to connect the organization internally, but also to reach a level of customer service that is not typical of our industry. This digital transformation is a once-in-a-lifetime opportunity for us. I think it can make us stronger, and it can give us a chance to be a leader in the industry. And that’s very motivating.

Leadership Q&A: Inspiring the Next Generation of Engineers

Meet Jim Fitterling of Dow and learn about his philanthropic leadership, his advocacy of diversity and inclusion in the workplace, and his commitment to creating positive change in the chemical industry.

Process Safety Beacon: Is Your Plant Prepared for a Natural Disaster?

The ChE in Context: The food-Energy-Water Nexus: An Engineering and Public Policy Priority

YPOV: Write a Résumé that Stands Out