Welcome, everyone, to 2018. Happy New Year! I am extremely honored and humbled to be the 2018 AIChE President. I have a deep sense of responsibility to the profession and to AIChE, and I’ll do my best to serve all of the membership. Please feel free to contact me at president@aiche.org.

It has been my pleasure to have volunteered with AIChE for more than 20 years and, as I reflect, I am impressed by how AIChE has grown. Over the past decade, the Institute’s operating revenue has increase by more than 90%, and net assets have grown by nearly 140%. Addressing the expanding profession, we have created new technical forums — including such diverse groups as the Chemical Engineering and the Law Forum, the Pharmaceutical Discovery, Development and Manufacturing Forum (PD2M), and the Sustainable Engineering Forum. We have also launched more than 20 new specialty conferences, including the Process Development Symposium, the Bioengineering and Translational Medicine Conference, a slate of international Center for Chemical Process Safety (CCPS) conferences, and the FDA-AIChE Workshop on Adopting Continuous Manufacturing, to name only a few. (My apologies if I didn’t list your favorite new specialty conference — the list is long!)

Also in the past 10 years, we’ve reinvigorated the AIChE Foundation and established the AIChE Gala. The Gala has been highly successful, with the 2017 Gala recognizing companies and their leaders for inspiring the next generation of engineers (see article, p. 64). The Foundation is in the midst of its Doing a World of Good campaign, with over $8 million raised and more than 5,600 member donors to date. The Foundation is making a profound impact across our community, in particular in support of programs for students and young professionals. These programs include the Undergraduate Process Safety Learning Initiative, with 276 universities participating and 300 faculty members trained; the Henry T. Brown Endowment for the Education of Under-Represented Minority Chemical Engineers; the John C. Chen Endowment for Young Professional Leadership; and AIChE’s 35-Under-35 Awards, celebrating the next generation of leaders. Also, the Foundation has established a fund to support chemical engineers impacted by the 2017 hurricanes. Please consider donating to the AIChE Foundation to help with the advancement of the chemical engineering profession.

The year 2017 was transformational. The U.S. Dept. of Energy’s (DOE) awarding of the Rapid Advancement in Process Intensification Deployment (RAPID) Manufacturing Institute to AIChE was unprecedented; among many distinctions, RAPID was the first and only Manufacturing USA Institute awarded to a professional engineering society. Also in 2017, members approved a modernized AIChE Constitution, which will allow for the Institute’s future growth. Our newest journal, Bioengineering & Translational Medicine, marked is first year of publication. And, we saw the inaugural presentation of AIChE’s Margaret Hutchinson Rousseau Pioneer Award for Lifetime Achievement by a Woman Chemical Engineer. During World War II, Rousseau — who was also AIChE’s first woman member — made pioneering contributions to Pfizer’s scale-up and design of the first deep-tank penicillin fermentation commercial plant. Penicillin was a turning point in human history, as the first real defense against bacterial infection. The first Pioneer Award was given to Frances Arnold of Cal Tech for her groundbreaking research in protein engineering.

Looking to this new year, the Institute will be reassessing and redeveloping its strategic plan — as it has been five years since the plan was updated, and another five years since it was originally developed. We will be reaching out to our members, stakeholders, and communities to gain input and feedback. Your voice will be important, so please take the time to comment on what you think we are doing well and what you think we should be doing.

New specialty conferences are also set to debut in 2018. And, on the membership front, AIChE has rolled out a new policy in which graduating student members will receive a complimentary first year of sponsored AIChE Young Professional membership.

I’m looking forward to connecting with the AIChE family — and to a fantastic 2018! 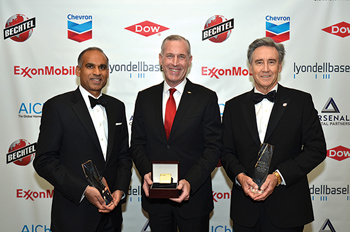 AIChE honored the companies LyondellBasell and Bechtel Group, Inc., along with those companies’ leaders, for their efforts to inspire the next generation of engineers, at an awards gala held in New York City on December 6.

LyondellBasell and its Chief Executive Officer, Bhavesh V. (Bob) Patel, were honored for “leadership in advancing possibilities for the next generation of engineers” — in particular through the company’s financial and volunteer support of schools working to improve science, engineering, technology, and mathematics (STEM) education in the communities where the company operates and for workforce development and job training programs at colleges and universities.

Bechtel, represented at the gala by President and Chief Operating Officer Jack Futcher, was recognized for “inspiring the next generation of engineers to dream big.” This includes efforts that equip students with the tools, education, and mentorship needed to succeed in STEM fields through Bechtel’s leadership in organizations such as DiscoverE, Junior Achievement®, and FIRST® Robotics, as well as its sponsorship of the IMAX film Dream Big, which promotes the importance of engineering in creating better lives for people around the world.

The gala also honored Jim Fitterling, President and Chief Operating Officer of The Dow Chemical Co., who received the AIChE Foundation’s inaugural Doing a World of Good Medal, a prize that salutes the achievements of an individual who has advanced the societal contributions of engineers. Fitterling was commended for his dedication to better preparing the next generation of engineers through AIChE’s Undergraduate Process Safety Learning Initiative, for his advocacy of diversity and inclusion in the workplace, and for his professional and personal commitment to mentorship.

In accepting the Doing a World of Good...