Technical Entity Trends: A Cure May Stem From Your Cells | AIChE
Skip to main content

Before her first birthday, Layla Richards was diagnosed with an aggressive form of leukemia. After chemotherapy and a bone marrow transplant failed to cure her, she was treated in 2015 with engineered T-cells. The treatment eradicated all traces of leukemia in her body.

Although cell therapies, such as those that employ T-cells, have been used for years, engineered stem cells are now tackling some of the same harmful conditions. In June 2016, a leukemia patient named Chuck Dandridge became the first adult in the U.S. to receive a newly modified stem cell transplant that uses genetically engineered blood cells from a family member. The engineered blood cells were transplanted from his son, and his leukemia is now in remission.

Stem cell engineering has the potential to take on many diseases, disorders, and conditions. Engineers and researchers in the field produce regenerative cellular therapies and treatments as well as diagnostic tools for treating and identifying diseases, such as blood disorders, cancers, retina disorders, and more. Stem cells can be derived from embryos (embryonic stem cells), from adult tissue (adult stem cells), or by reprogramming adult cells to behave as if they were embryonic stem cells (induced pluripotent stem cells). Induced pluripotent stem (iPS) cells have tremendous potential for regenerative medicine, because they enable the creation of patient-specific, immunologically matched stem cells without involving embryos. 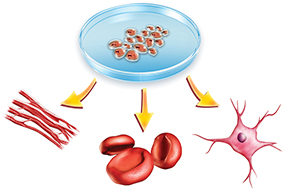 ▲ Pluripotent stem cells can generate many other types of cells, including muscle, blood, and neural cells.

There are still major challenges to address before stem cells can be widely applied as a therapy. Our understanding of the molecular mechanisms that underlie stem cell potency, self-renewal, and differentiation is still incomplete. New interdisciplinary bioengineering strategies for stem cell production, characterization, growth, purification, and delivery are needed. Novel approaches and technologies are also needed to rapidly accelerate the translation of stem cell discoveries into cellular and molecular therapies and in vitro diagnostic platforms.

Several areas of stem cell research and engineering could benefit from an integrated approach that involves biologists and engineers from academia and industry. Stem cells are exposed to various physical, mechanical, and chemical stimuli during development and regeneration. For example, in ischemic disorders, injured blood vessels are exposed to low oxygen supply and low shear stress (unlike healthy vasculature, which is exposed to high oxygen levels and high shear stress). Engineering fundamentals such as transport phenomena and mechanical force could help us better understand and control stem cell responses.

Recent advances in biomimetic systems could be used to recreate the developing or regenerating environment in vitro. Bioreactors, microfluidics, and scaffolds provide control over a variety of microenvironment conditions. Studying these culture systems may help researchers to better understand human stem cell morphogenesis, as well as enable testing of various therapeutic targets and the development of computational and mathematical predictive models.

In vivo stimulation of regenerative pathways is being studied as an alternative approach to stem cell transplantation. A patient’s own stem cells could be recruited to the injured tissue to regenerate and heal the surrounding cells. Triggering this healing mechanism would involve chemical stimulation, as well as the use of specially designed biomaterials to induce interactions between the injured tissue and the patient’s immune system.

Scaleup of therapeutic technologies developed in academic laboratories will require new and/or improved bioprocesses and manufacturing practices that are suitable for clinical applications. Clinical testing of therapeutics and feedback from clinicians is critical to advancing therapeutics beyond the bench.