Nestled on the northeastern coast of the Arabian Peninsula, Qatar is largely desert land, punctuated by modern infrastructure and advanced industries. The small country (4,473 sq. miles) is home to only 400,000 Qatari citizens and 1.9 million expatriates, but it boasts the highest gross domestic product (GDP) per capita in the world. 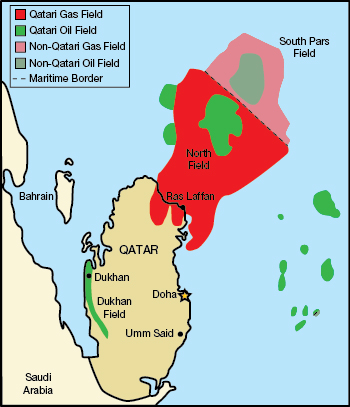 Qatar’s economy is largely based on oil and gas production and processing. The Qatar National Bank (QNB) reported that earnings from the hydrocarbon sector accounted for nearly half of the country’s total government revenues in 2014. Qatar’s recoverable reserves of oil and gas are reported to be 25 billion barrels (bbl) and 872 trillion standard ft3 (scf), respectively. This puts Qatar behind only Russia and Iran in terms of natural gas reserves and thirteenth in the world in terms of crude oil reserves. Qatar’s North Field and its geological extension of Iran’s South Pars Field have the world’s largest non-associated gas reserves (Figure 1). Most of Qatar’s natural gas production comes from the North Field, which at current gas production rates is expected to last another century.

Qatar intends to capitalize on its abundant gas resources — and has set a goal to become the “Gas Capital of the World.” It is pushing to become a primary global energy supplier and a pioneer in the gas processing industry, and it is already home to several of the world’s largest gas-processing facilities. The Qatar National Vision for 2030 (1) is a development plan that states Qatar’s intention to transform “into an advanced country by 2030, capable of sustaining its own development and providing for a high standard of living for all of its people for generations to come.”

After the fall of the Ottoman Empire, Qatar became a British protectorate in 1916. Before discovery of its vast energy reserves, Qatar’s economy was largely based on pearling, fishing, and trading. The first oil reserve, the Dukhan Field, was discovered in 1939.

Qatar became the sixth member of the Organization of Petroleum Exporting Countries (OPEC) in 1961. The country is the second-smallest crude oil producer of the 12 OPEC members. OPEC’s strategies impact energy prices, which greatly affect the Qatari oil and gas industry. In 1971, the same year that Qatar declared its independence to become a sovereign constitutional monarchy, the North Field natural gas reserves were discovered off Qatar’s northeast coast. Because of infrastructure and policy issues, it took about two decades for the full extent of this reserve to be realized and for the massive commercialization efforts to ensue.

Most of the oil and gas industry is clustered in the industrial cities of Ras Laffan and Umm Said (also known as Messaied). Umm Said was established in 1949 as a deepwater tanker terminal and port to export the crude oil received from the Dukhan Field, and Ras Laffan is in close proximity to the North Field. TheUmm Said was built in 1953 to meet domestic needs and to export refined products. Oil and gas companies, as well as companies related to the industry, began to establish themselves in the decades to follow, including the Qatar Fertilizer Company (QAFCO), established in 1969; Qatar Petroleum (QP), established in 1974; Qatar Steel Co., which started production in 1978; and Qatar Petrochemicals Co. (QAPCO), which started production in 1981.

Since then, Qatar has become a key global leader in the hydrocarbon sector. The Pearl and Oryx plants are the world’s largest gas-to-liquid (GTL) facilities. Located in Ras Laffan, these plants produce 140,000 bbl/day and 34,000 bbl/day, respectively.

The Qatari companies RasGas and QatarGas (recently merged under the name QatarGas) have constructed 14 liquefied natural gas (LNG) trains with a combined annual production capacity of 79 million m.t. This accounts for about a third of the global LNG trade, which makes Qatar the world’s largest LNG supplier (2). 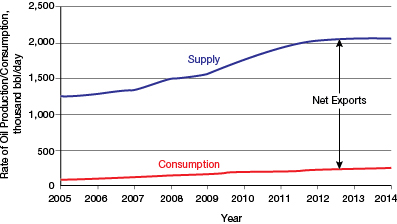 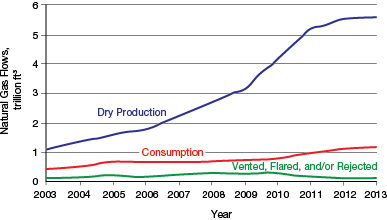 ▲Figure 2. Qatar’s production of natural gas and oil far exceeds its demand, allowing the small country to monetize much of the difference.

Because Qatar’s natural gas resources meet most of its energy demand, the country exports much of its natural gas, crude oil, and petroleum products (Figure 2). The exports of oil-and-gas-derived fuels, products, lubricants, and chemicals account for 98% of the country’s total export commodities — valued in 2015 at about $78 billion. Qatar exports these products primarily to Japan, South Korea, and India (3).

Qatar has a well-integrated supply chain of gas processing facilities. Qatar Petroleum (QP) is a state-owned corporation that controls all aspects of the upstream and downstream oil and natural gas sectors, including exploration, production, transport, storage, marketing, and sales. QP operates through joint ventures and subsidiaries.

▲Figure 3. Qatar Petroleum (QP) operates through a network of subsidiaries and joint ventures. Each block gives the name of the company, its owners, and their percentage ownership. The primary feedstocks and products are shown as inputs to and outputs from the blocks. Unless stated otherwise, the production rates are given in million m.t. per year.

The gas processing industries in Qatar produce a variety of products, including fuels, chemicals, fertilizers, and petrochemicals. Figure 3 shows the major gas conversion streams and their interconnections. 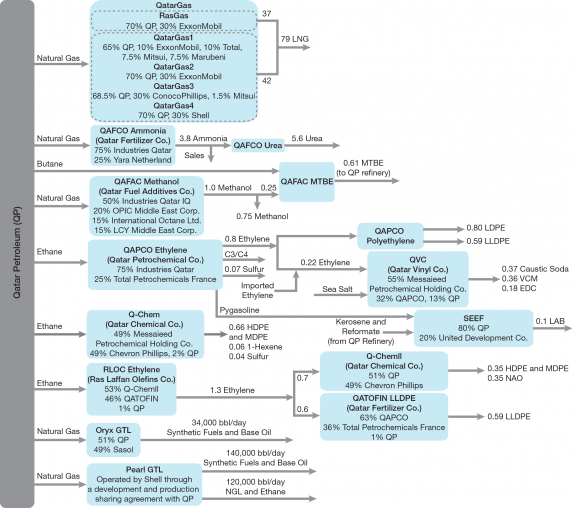 Advancing sustainable development is a principal objective for Qatar (4). Several initiatives have been launched to conserve natural resources and mitigate environmental pollution. Qatar obtains almost all of its fresh water through desalination, which makes water management critical (5). To optimize water use, it employs process modification; wastewater treatment, recycle, and reuse; water desalination and power infrastructure synergism; and integration of water resources and infrastructure (6, 7).

A large industrial base located in a small area has put Qatar’s annual greenhouse gas (GHG) emissions per capita at the top of the list globally (8, 9). Various initiatives to substantially reduce its carbon footprint include carbon management networks and industrial-city integration (10, 11), dry reforming (12), and flare mitigation (13, 14). The carbon dioxide recovery (CDR) plant at Qatar Fuel Additives Co. (QAFAC) in Umm Said utilizes carbon to reduce GHG emissions. It recovers 150,000 m.t/yr of CO2 from the fluegases of a methanol process and uses the captured CO2 to produce an additional 90,000 m.t./yr of methanol (15, 16).

Part of Qatar’s vision for the future is to introduce 10 GW of solar power capacity by 2030 (17, 18). It is big news for the country that the 2022 Fédération Internationale de Football Association (FIFA) World Cup will take place in Qatar. Various sustainable technologies and infrastructures, including solar lighting and cooling and energy-efficient and reconfigurable stadiums, are being introduced to make it a carbon-neutral event.

The recent discoveries of abundant shale gas reserves in the U.S. and the current slump in energy prices pose major challenges to Qatar’s industrial sector. Low oil and gas prices have caused industrial revenue to decline, and Qatar has reported its first budget deficit (estimated to be 0.7% of GDP) in 2016, after 15 years of budget surplus (19).

In addition to cutting spending, Qatar plans to improve operational efficiency to ensure a robust economy. It is taking steps to diversify the industrial portfolio, including adding specialty chemicals, additives, and polymer processes, as well as building more small- and medium-sized plants.

Some projects that were at or beyond the front-end engineering design (FEED) phase have been cancelled. QP cancelled plans to build two petrochemical complexes — called Al-Sejeel and Al-Karaana — citing economic and competitiveness hurdles (20).

The Qatar Foundation supports chemical engineering research and other national priority areas through the Qatar National Research Fund (www.qnrf.org), as well as through specialized institutions such as the Qatar Science and Technology Park (QSTP) (www.qstp.org.qa) and the Qatar Environmental and Energy Research Institute (QEERI) (www.qeeri.org.qa).