Today’s solar cells are mainly used for large-scale power production. However, the up-and-coming internet of things (IoT) will require many sensors and devices to transmit information wirelessly to computer networks and mobile personal electronics. Those sensors and devices could be powered with solar cells that harvest energy from either freely available sunlight or indoor lighting, provided the solar cells are small, inexpensive, lightweight, and able to conform and adhere to surfaces with any shape or texture.

To address the need for a new type of solar cell, an interdisciplinary team of chemical engineers, botanists, and artists is developing a paper solar cell technology that can be mounted on nearly any surface. The team is conducting its research through the Industry University Cooperative Research Center for Next Generation Photovoltaics (NGPV IUCRC), established in 2010 with support from the National Science Foundation to advance industrially relevant, pre-competitive research.

The team, led by Brian Korgel, Vikas Reddy, and James Sham at the Univ. of Texas at Austin, recently demonstrated paper solar cells with efficiencies of 2.25%, which is the highest yet reported for devices fabricated directly on paper. The paper devices have exceptional mechanical and electrical integrity, are stable in air, and retain their performance when bent or even folded and unfolded multiple times across the active area of the device. 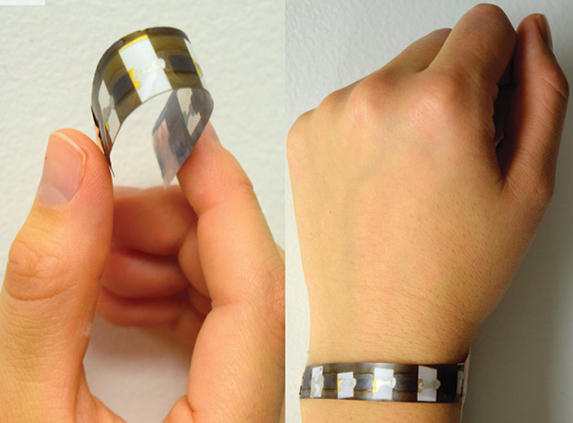 ▲ A thin piece of cellulose paper containing 10 solar cells can withstand folding and bending (left), which makes it good for applications such as wearable devices (right).

The solar cell technology involves a combination of nanocellulose paper cultivated by bacteria and a semiconducting nanocrystal ink. A scalable process harnesses the bacterium Gluconacetobacter hansenii to produce dense nanocellulose membranes that are processed into paper. The nanoporous structure of the paper enables exceptional adhesion of the device layers and mitigates the impact of bending stresses that typically cause these brittle layers to crack.

The semiconducting (light-harvesting) layer is also critical to the mechanical flexibility and integrity of the overall paper device. It prevents crack propagation on the nano-cellulose paper and stabilizes the entire device stack when it is bent or folded. The researchers produce the light-harvesting films by spray-depositing an ink of colloidal nanocrystals composed of copper-indium-diselenide (CuInSe2) onto the paper substrate. The nanocrystals are made via readily available solution-based chemical processes and materials. The composition of CuInSe2 is similar to copper-indium-gallium-selenide (CIGS), which is commercially used in high-efficiency thin-film photov-oltaics; however, the CuInSe2 nano-crystal devices perform better without the addition of gallium, which is expensive and makes the cost of CIGS a barrier for many applications.

Several industrial partners of NGPV IUCRC, including Boeing, Novacentrix, Emcore, Statoil, First Solar, EMD/Millipore, Big Solar Ltd., and Lucelo, have shown interest in the nanocrystal inks and their use to enable new kinds of solar cells.

Ray Lewandowski, head of U.S. operations and development at Big Solar Ltd., says, “It has been exciting to watch the nanocrystal ink technology develop during these past few years. The research team is poised to achieve efficiencies that will open a number of commercial opportunities.”

The researchers have created prototypes with 10 small-area photovoltaics (PVs) integrated on a single piece of paper to generate 1.5 V under indoor fluorescent lighting and operate several voltage-driven devices, including liquid crystal displays (LCDs). Prototypes include adhesive strips and decorative wearables, as well as a monolithic form that can be integrated with data-collecting devices.

The new solar-cell devices must be about 2.5 in.2 to generate sufficient power from indoor lighting to power most IoT applications. Efficiencies closer to 5% would allow for the use of smaller devices (1.0 in.2) and lower the costs to a projected $0.03 per device.

The power-to-weight ratios of the paper solar cells are similar to those of high-efficiency single-crystal silicon and multijunction III-V solar cells, although the power output of the paper devices is much lower due to low device currents.

The team is working to improve efficiency and demonstrate the low-cost integration of the paper PVs into emerging IoT sensor technologies.

AIChE and the Young Professionals Committee (YPC), with support from the AIChE Foundation, are recognizing these 35 outstanding young professional AIChE members with the AIChE 35 Under 35 Award because they have made significant contributions to the Institute and to the chemical engineering profession.

This article focuses on adsorbents, including activated carbon, zeolite molecular sieves, and polymeric adsorbents, as well as ion exchange resins.

This article guides you through a condition monitoring program framework and details techniques to assess the function of your equipment.

Motivated by legal and regulatory requirements, as well as by financial incentives for taking voluntary actions, many companies are embracing more proactive risk-management methods and building sustainability practices into their business models.