A virtual Fellows Gathering was held in place of the usual early morning Breakfast in conjunction with the AIChE Spring Meeting. The Gathering was from 12-1 PM CDT. Gina Gatto arranged for individual Zoom connections using information in individuals’ Zoom registrations. There was no charge with registrants being invited to donate to the Fellows Endowment. The total is now nearly $8000. There were ~ 100 attendees.

Robert Ofoli chaired the program. Reports were given by AIChE Executive Director June Wispelwey and by 2021 President, Deb Grubbe. Key takeaways were:

Around 12:40, participants were moved to one of three Zoom breakout rooms on: Fellows Task Force on Student Chapters (see below) led by Greg Yeo (19 attendees); Tools for Fellows Volunteering led by Anthony Fregosi (18 attendees); and Fellows Nominations led by Annette Johnston (21 attendees).

Online surveys were taken during the breakouts. Responses indicated that all Fellows remain active in service such as Committees, Local Sections, Mentoring, etc., though not all are aware of how to become more involved. All believe that Fellows can make a difference in developing ChE students and are interested in engaging with student chapters. Most are very interested in supporting ACE4G and being involved with career guidance and presenting seminars to students.

Later that day, a Fellows Get Together with no agenda was held for virtual Fellowship. 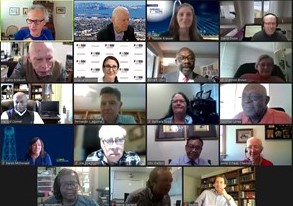