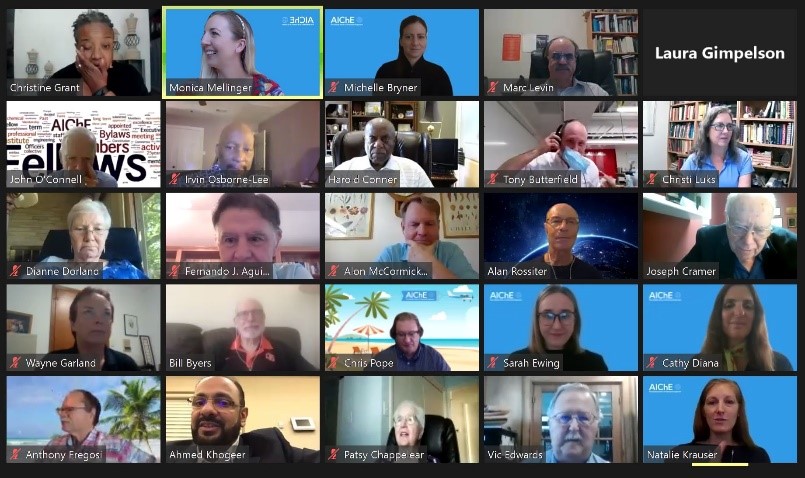 A virtual Fellows Gathering was held in place of the usual early morning Breakfast in conjunction with the AIChE Spring Meeting. The Gathering was from 10-11 AM CDT. Monica Mellinger arranged for individual Zoom connections using information in individuals’ Zoom registrations. There was no charge with registrants being invited to donate to the Fellows Endowment. About $4000 was raised. A survey was sent to all ~ 100 attendees.

The program was opened by Robert Ofoli, and Monica Mellinger was the session chair. At about 10:40, the attendees were moved to one of four Zoom breakout rooms for discussions related to four elements of the AIChE initiative on Equity, Diversity and Inclusion. The breakout sessions were organized by the SIOC/Fellows WG. Each room was facilitated by a Fellow, an AIChE staff member, and a member of an SIOC committee: Minority Affairs (MAC), Women’s Initiative (WIC), Lesbian, Gay, Bisexual, Transgender, Queer (LGBTQ+), Disabilities Out Reach and Inclusion (DORIC). Attendees were placed in their desired breakouts, with a few misplacements occurring due to a software malfunction. Very few attendees left early.

Summaries of the facilitator notes

MAC
: Need more outreach by teams and greater publicity of role models exemplifying minorities in the profession at all school levels along with university and industrial mentoring and interning. Fellows should mentor with Local Sections. Review previous AIChE activities.

WIC: The focus was on the preparation of women to function as leaders including showing characteristics of successful female leaders.  Organic to organizations, especially academic, should be mentoring and sponsoring. Give indications of progress for women in ChE, especially in academia, such as statistics of women Fellows and women leaders of student design teams.

LBGTQ+ Experiences were shared of when being the only person of a particular demographic in a group: being the only American, the only husband at an AIChE “wife” program, the first woman Fellow, the first black woman Fellow. Fellows could be mentors, get educated about LGBTQ+ & Allies such as safe zoning, and get involved in EDI activities. The session showed collective action can begin. Fellows need to be visible and create an inclusive climate in the profession.

DORIC: AIChE should share best practices among universities, companies, and STEM organizations, with a focus on the positives and international issues. All ED&I materials, including a glossary of terms, should be collected on a website. ED&I should be analogous to sensitivity/skills/awareness in ChE safety culture, suggesting “Inclusion minutes” like “Safety minutes”. Safe spaces need to be created for conversation and learning.

The conclusions were that, overall, both parts of the program were quite successful. The highlights of the full meeting were the leadership reports, while the quality of discussion and breadth of participation were best in the breakouts. Several responders liked knowing that the Fellows can be engaged.

There is considerable enthusiasm for more such meetings, including small groups and not

necessarily associated with AIChE Meetings.  Most support was for the topics of volunteering and more ED&I, along with other themes. The concerns were mostly about getting to the breakouts.