Fast pyrolysis is one of many processes being developed to convert biomass into advanced biofuels and other energy and chemical products. In fast pyrolysis, biomass is rapidly heated to about 500°C to release volatile compounds that are quickly withdrawn from the reactor and condensed to produce liquid bio-oil and small amounts of biochar and noncondensable gases. The bio-oil is a viscous emulsion composed of a variety of organic compounds derived from the deconstruction of carbohydrates and lignin in the biomass. It is usually refined to improve its storage stability and reduce its viscosity; alternatively, it can be deoxygenated to produce hydrocarbons.

Supplying the energy for pyrolysis via heat transfer becomes increasingly difficult as the system is scaled up. As the reactor becomes larger, energy demand for pyrolysis (which is related to volume) cannot be satisfied by the energy from heat transfer (which is related to surface area). Heat transfer is rate-limiting and the capacity of the reactor only scales as the square of diameter, regardless of whether indirect or direct heat transfer is employed (assuming a fixed diameter-to-length ratio). Since the cost of a reactor roughly increases with the square of the diameter, costs increase linearly with capacity. 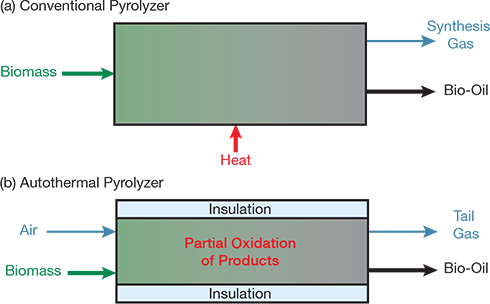 ▲ (a) Conventional pyrolysis converts biomass to bio-oil and synthesis gas (a mixture of carbon monoxide, carbon dioxide, and hydrogen) using an external energy source to heat the reactor. (b) Autothermal pyrolysis does not require external energy because it admits air into the reactor to partially oxidize products of pyrolysis as a source of thermal energy. The tail gas from autothermal pyrolysis is similar to syngas except that it contains more carbon dioxide from the partial oxidation reactions.

An autothermal pyrolysis process can overcome these barriers by balancing the energy demand of endothermic reactions with the energy released from exothermic reactions. If these reactions occur in the same space, heat carriers, heat exchangers, and the associated ancillary equipment can be reduced in size or even eliminated. Since the chemical reaction rate, rather than heat-transfer rate, controls the overall process, capacity scales with the cube of the reactor diameter. Intensification — defined here as the ratio of throughput for an autothermal reactor to throughput for a conventional reactor — increases linearly with reactor diameter as the system is scaled up. The capital cost per unit capacity decreases as the reactor throughput increases.

Autothermal operation is widely practiced for endothermic processes that approach chemical equilibrium (e.g., gasification of solid fuels and steam reforming of gaseous fuels). A small amount of oxygen is admitted into the reactor to burn a small fraction of products, releasing enough energy to drive reactions toward chemical equilibrium and producing a mixture of light, flammable gases.

The benefit of adding oxygen to a pyrolyzer is less obvious because the desired product, bio-oil, is the product of reactions that proceed far from equilibrium. Adding oxygen risks oxidizing high-molecular-weight compounds in the pyrolysis vapors (i.e., heavy ends), producing more low-molecular-weight compounds (i.e., light ends) that are less valuable.

This concern is mitigated by using a fluidized-bed reactor to rapidly mix reactants and products, avoiding hot spots that could degrade the bio-oil as it is produced. Autothermal pyrolysis has recently been demonstrated in experiments with a small pilot-scale, fluidized-bed pyrolyzer (3.5-in. reactor diameter) that successfully converted both woody (red oak) and herbaceous (corn stover) feedstocks into bio-oil. Analysis of the products revealed little loss of heavy ends — about 6% for the red oak and almost none for the corn stover. Partial oxidation of the biochar and light oxygenates generated most of the energy for pyrolysis. Most impressive was the intensification of fast pyrolysis; throughput of both kinds of biomass increased almost three-fold when the reactor was switched from conventional to autothermal operation.

The combination of process simplification and intensification achieved in these pilot-scale tests have encouraged the private financing of a 50-ton/day demonstration-scale autothermal pyrolysis plant to be operated on corn stover in Iowa. A contract for a second demonstration-scale project employing woody biomass is under negotiation.

The results of AIChE’s biennial salary survey are in, revealing positive advances for the chemical engineering profession. The median annual salary of respondents to the 2019 survey is $126,000 — a 1.6% increase over the 2017 median of $124,000.

Chemical engineers continue to earn more than the average U.S. worker. The median salary of survey respondents is $126,000 — 1.6% higher than the median reported in 2017.

Cyberattacks can infiltrate and disrupt industrial processes, causing operational disturbances, equipment damage, and even injury to employees. Incorporating cybersecurity into process hazard analyses can help you identify the vulnerabilities in your facility.

The chemical process industries (CPI) are hurtling toward a smarter future, but confusion and exaggeration around new technologies are causing some to want to stay behind. Sober guidance on selection, implementation, and utilization of digital tools can help differentiate the hope from the hype.

Optimize Water and Energy Use in Evaporative Cooling Towers

Design your evaporative cooling tower to handle variable ambient conditions and find the optimal balance between energy and water use.

Career Connections: Speak So Your Boss Will Listen

Editorial: It’s in My Nature

Patent Update: Will Secret Sales Be a Bar to a Patent?