The need to secure a domestic supply of elements considered critical to production in the primary materials, consumer electronics, energy, and transportation sectors is a hot topic in the U.S. advanced manufacturing community. In 2017, the White House issued Executive Order 13817, “A Federal Strategy to Ensure Secure and Reliable Supplies of Critical Minerals,” which defined critical minerals as a nonfuel mineral or mineral material used in U.S. manufacturing that is essential to the economic and national security of the U.S. and that has a supply chain vulnerable to disruption. These elements are considered critical because their supply is either:

The analysis that followed the Executive Order ultimately identified 35 elements or mineral groups considered critical. Among these materials are elements that are used in heterogeneous catalysts in chemical and materials processing, such as chromium, platinum, palladium, and vanadium, as well as primary metals that are increasingly used for high-strength, lightweight structures in vehicles, such as aluminum, magnesium, and titanium.

More recent concern has focused on rare earth elements (REEs), which include scandium, yttrium, and the lanthanide series elements. Several REEs, such as neodymium, are in high demand for use in permanent magnets for electric vehicle motors and wind turbine generators or in electrodes for advanced batteries.

According to the U.S. Geological Survey’s Mineral Commodities Summary 2019, 100% of REEs used in the U.S. were imported in 2018, with a majority coming from China, which is responsible for 80% of global production. U.S. production has declined in the past decade, following a peak in which the Mountain Pass mine in California produced most of the world’s REEs. 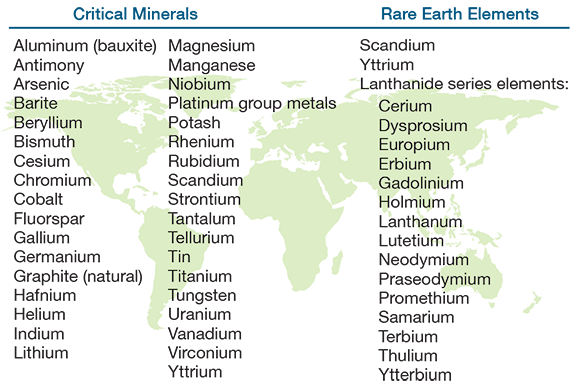 While the U.S. now largely lacks processing capacity for these and other critical materials, it does maintain a supply of raw materials in the form of ores, geothermal brines, mine tailings, coal, and waste materials (e.g., electronics waste, foundry slags, and fly ash from coal-fired power generation). Some relevant critical materials could be sourced from these various raw materials supplies.

The U.S. Dept. of Energy (DOE) and other federal agencies have funded work to recover REEs and other critical materials from various domestic sources. These projects have produced some economically viable new process technologies, but these efforts must overcome technical challenges, as many alternative sources have low concentrations of REEs. The cost to separate a target material from a mixture scales inversely with the initial concentration of that material. Creative approaches are needed to source REEs from low-concentration sources like fly ash.

The DOE also supports substantial work via the Critical Materials Institute at Ames Laboratory. The institute draws on its broad coalition of partners to develop new process technologies related to REEs and other critical minerals, as well as develop potential substitute materials. Most of these substitutes and new processing technologies, however, have yet to be commercialized. A key barrier to scaleup and deployment of new processing technologies is often the high cost of entry for building manufacturing plants.

Onshoring or reshoring of critical materials processing capacity is important to securing the supply chain, and modular processes should play a role in developing the processing infrastructure. As technology developers design and prove new processes for unlocking REEs and other critical materials from alternative sources, they should consider opportunities to modularize these processes. Modular processes can enable efficient factory fabrication of skidded equipment that scales by number rather than volume. These developers might also look to electrify processes, incorporating low-cost renewable power from solar photovoltaics and wind assets to both decarbonize and reduce operating costs.

As with many of the projects being developed by the RAPID Manufacturing Institute, modularization of new critical materials manufacturing processes may allow organizations to deploy first-of-kind systems at lower capital and operating costs, as well as with lower risk.

Protect Tanks from Overpressure and Vacuum

Low pressure does not mean low risk. If low-pressure tanks are compromised, they can release large volumes of material to the environment. Develop a safeguarding strategy for each tank at your site.

Steam tracing systems are used throughout oil and gas and chemical facilities. Common problems, such as steam locking caused by incorrect installation, can hinder the performance of these systems.

Purification via distillation can be an extremely energy-intensive process. Energy requirements can be reduced by redirecting a lower-purity distillate or bottoms stream into a low-energy system, such as a membrane, for final purification.

Get to Know Local Government

You might find yourself either employed by a local government or working on a project that requires you to interface with officials and the community. Know the types of local governments, funding mechanisms, and methods to best interact with the public before diving into unfamiliar waters.