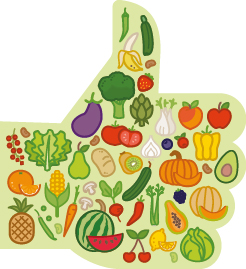 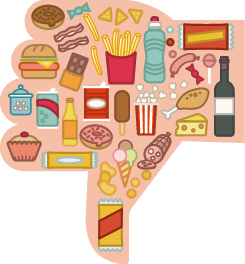 Consumers have grown used to having information at their fingertips, which has bred greater awareness about healthy eating and demand for transparency. The food industry must contend with global population growth that will require increased output, as well as an expanding middle class that demands healthy, fast, and convenient foods.

In an effort to increase transparency and attract health-conscious consumers, product labels boast what products are and are not. Manufacturers are highlighting the use of organic ingredients and support for regional and local suppliers, as well as the absence of ingredients such as high-fructose corn syrup, gluten, and genetically modified organisms (GMOs). A growing trend is to incorporate natural functional foods and supplements into products that promise healing properties and health benefits, such as turmeric, ginger, and spirulina to reduce inflammation and other benefits.

In addition to being conscious of their own health, consumers are also concerned about the health of their community and planet. New technologies have been developed to allow consumers to trace ingredients — to know, literally, where their food came from — identifying the location of origin and farmer profile, as well as shipping, preparation, and storage methods. This information holds manufacturers accountable for their environmental footprint and treatment of workers and animals. This helps brands to demonstrate their value to the community and consumer, helping to differentiate them from the competition.

Consumer demand for environmental stewardship and technological innovations are enabling new foods. The National Academy of Sciences (NAS) published a study that highlighted the environmental impact of beef production, reporting that it requires 28 times more land, 11 times more water, and six times as much reactive nitrogen, and it produces five times the amount of greenhouse gases than the average of other meats and animal products. This has motivated the development of plant-based meat substitutes that mimic beef, such as the Impossible Burger, which claims each burger saves 75 ft2 of land, one-half bathtub of water, and 18 miles worth of car emissions. The burger is made from wheat and potato protein, which gives it a chew similar to that of its meat counterparts. The molecule heme, a vital part of plant and animal cells, imparts a beefy flavor and the ability to “bleed.” The heme in the burger is isolated from leghemoglobin in legumes.

Food and packaging waste are major contributors to the food industry’s environmental footprint. Consumers have become more active in their support for minimizing food waste and leveraging biodegradable or minimal packaging options. While many consumers are practicing “root-to-stem” and “nose-to-tail” eating at their dinner tables, they also want to support companies with the same values. About one-third of the food produced in the world is wasted, reaching epidemic levels. Manufacturers are finding new ways to rework out-of-spec product rather than simply disposing of it. For example, broken rice kernels that are not suitable to be sold as-is can be ground to create rice flour.

Technology has evolved to a point where even packaging material can be made completely biodegradable. These biomaterials help to eliminate harmful plastics from the environment. Mushroom Material products are manufactured using mycelia, which are essentially the roots of mushrooms. The material is light, yet sturdy, and does not degrade without exposure to living organisms and moisture. The mushrooms are grown in molds that form them into specific shapes. Much like ceramics, these molds are then fired in an oven to kill the fungi and stop growth. Common mushrooms, such as oyster mushrooms, that thrive on dead plant material and are nontoxic are typically used and are safe for food packaging applications.

Consumer demands and technological innovations have shaken up the once-stable food industry. This has forced more intersection within and throughout the field, fostering new relationships between large manufacturing companies, local farmers, chefs, and policymakers. These relationships have advanced the field and sparked discussions such as those taking place at AIChE’s Food, Pharmaceutical, and Bioengineering Div.’s first Food Innovation and Engineering (FOODIE) Conference (Dec. 2–4, 2018, Napa, CA). The FOODIE Conference will cover emerging technologies in food production, foster industry connections, and help manufacturers navigate the consumer market.

Win the Race to an Energy-Efficient Future

Shopping for an appliance, for instance, a microwave, is a familiar task. How you shop for that microwave, however, is distinctly different in 2018 than it was in, say, 1998. In 1998, you would have visited your local appliance retailer and purchased the model that fit your needs and budget. Perhaps...

Better Plants: Working with Manufacturers to Save Energy

A Ten-Step Process for Energy Analysis

Win the Race to an Energy-Efficient Future; Better Plants: Working with Manufacturers to Save Energy; A Ten-Step Process for Energy Analysis

Can We Count on Good Turndown in Two-Pass Moving-Valve Trays?

At turndown, the efficiency of two-pass moving-valve trays may be lower than expected due to maldistribution of the vapor within the trays. This article explores this maldistribution and describes ways to alleviate it.

Job hazard analyses require employees and employers to think critically about the dangers of a work environment and prepare operators for the unexpected.

Editorial: Clean Water: What is it Worth?

This is an expanded version of the editorial that appears in the November 2018 issue of CEP ...