A 70-m3 (18,500-U.S. gal) fixed-roof acrylic acid (AA) tank exploded, causing a fire at an industrial site in Himeji, Japan, in September 2012, destroying the tank and damaging nearby facilities (Image 1 and Image 2). A firefighter was killed and 36 people were injured, including two police officers, 24 firefighters, and 10 plant workers. The surrounding neighborhood and environment were not impacted. 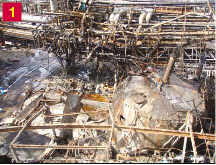 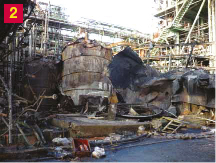 The tank provided intermediate storage between two distillation columns that purified AA. Originally, the tank had been used at full capacity. The contents were cooled and mixed by being pumped from the bottom of the tank to the top. Later, the normal operating level was reduced to a level below the cooling coil. The contents were not recirculated to the top of the tank, but instead to a nozzle near the bottom that was also used to connect a level gage (Image 3).

At the time of the explosion, the plant was conducting a test of the downstream distillation column, which required stopping the feed from the AA tank. The level of the tank gradually increased to its original operating level. Because the recycle to the top of the tank had been stopped, the AA above the cooling coils was not mixed and cooled. The temperature of the incoming AA was believed to be below the onset temperature for polymerization, and it contained polymerization inhibitor. However, the temperature in the tank increased, particularly at the top, and the tank eventually overpressurized and exploded.

Small changes can have big consequences!

Win the Race to an Energy-Efficient Future

Shopping for an appliance, for instance, a microwave, is a familiar task. How you shop for that microwave, however, is distinctly different in 2018 than it was in, say, 1998. In 1998, you would have visited your local appliance retailer and purchased the model that fit your needs and budget. Perhaps...

Better Plants: Working with Manufacturers to Save Energy

A Ten-Step Process for Energy Analysis

Win the Race to an Energy-Efficient Future; Better Plants: Working with Manufacturers to Save Energy; A Ten-Step Process for Energy Analysis

Can We Count on Good Turndown in Two-Pass Moving-Valve Trays?

At turndown, the efficiency of two-pass moving-valve trays may be lower than expected due to maldistribution of the vapor within the trays. This article explores this maldistribution and describes ways to alleviate it.

Job hazard analyses require employees and employers to think critically about the dangers of a work environment and prepare operators for the unexpected.

Editorial: Clean Water: What is it Worth?

This is an expanded version of the editorial that appears in the November 2018 issue of CEP ...