Carbon capture, utilization, and storage (CCUS) technologies may play a critical role in dealing with global carbon dioxide emissions in the 21st century. Whether in leading, supporting, temporary, or other roles, these technologies could be crucial in reducing and removing carbon emissions from the large sources of concentrated CO2: fossil-fuel electric power stations; steel, concrete, cement, and other heavy manufacturing facilities; and natural resource refineries. However, high capital and operating costs, technology risks, and concerns that CCUS could delay a transition away from fossil fuels must be addressed before these technologies can be fully developed, deployed, and accepted.

This article explores the basic approaches to dealing with carbon dioxide emissions, barriers to the adoption of existing CCUS technologies, and CCUS technologies under development today. It describes the NRG COSIA Carbon XPRIZE, a $20-million global competition to catalyze breakthroughs in technologies that convert post-combustion CO2 emissions into valuable products, and the capacity for such incentive prize competitions to create a lasting and meaningful impact on reducing greenhouse gas (GHG) emissions.

Anthropogenic CO2 emissions are generally discussed within the larger context of energy and climate change. The coupling of science and engineering problems with the social and political discourse around energy, climate, and the environment presents challenges. But it also introduces opportunities to shine a spotlight on technologies at the heart of CO2 production, conversion, and mitigation; on the creative minds developing solutions; and on the impact that breakthroughs in these areas can have inside and outside of the engineering and science communities.

The concentration of CO2 in the atmosphere has increased from around 280 ppm before the start of the industrial revolution in the 18th century to over 400 ppm today, as shown in Figure 1 (1). This rapid increase in CO2 concentration has been accompanied by significant increases in the concentrations of nitrous oxide (N2O) and methane (CH4). The Intergovernmental Panel on Climate Change (IPCC) has reported that, given the stability and lifetime of CO2 in the atmosphere and oceans, emission rates of anthropogenic CO2 will need to be significantly reduced to stabilize overall CO2 concentrations. More recently, some researchers have concluded that stabilizing CO2 concentrations may not be enough, and that “negative carbon” techniques — i.e., approaches that actively remove CO2 from the air and oceans — may be necessary. 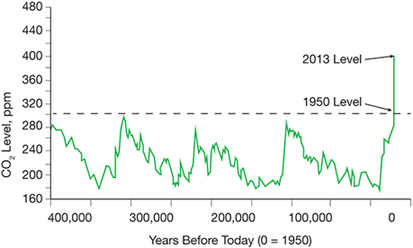 The sources of anthropogenic CO2 are well-documented elsewhere, so they are only summarized here. Energy use is responsible for the largest share — roughly 70% of global anthropogenic GHG emissions. Ninety percent of the GHG emissions attributable to energy use are CO2. In 2014, total global CO2 emissions were estimated to be 36 gigatons (Gt) per year (2, 3).

The production of electricity and heat are the leading sources of anthropogenic CO2 (42%), followed by emissions associated with transportation (combustion of liquid fuels), and industry (primarily manufacturing and refining), as shown in Figure 2. Despite rapid developments in renewables (including improvements in technology performance, cost, manufacturing, and deployment), global generation of electricity and heat is still dominated by fossil fuels, particularly coal. Furthermore, the balance between fossil and non-fossil sources of energy worldwide has shifted only slightly over the past generation, from roughly 86% fossil and 14% non-fossil in 1971 to 82% fossil and 18% non-fossil in 2012 (4). 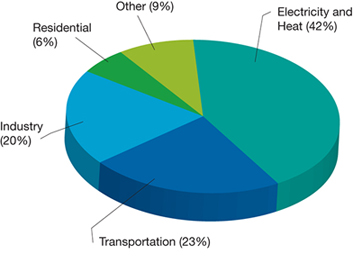 ▲ Figure 2. The production of electricity and heat is the leading source of CO2 emissions.

The future may not necessarily mirror the past, and history does not preclude an exponential transformation in global energy systems over the next generation. Still, inertial factors in energy systems — such as the decades-long lifespan of coal-fired power plants and other physical assets, and the structure and duration of fuel- and power-purchasing contracts — will continue to present major challenges to achieving such a transformation in the coming 30 or 40 years (4).

Identifying the most efficient path to reducing atmospheric CO2 is the subject of much research and debate. Most solutions being considered fall into one of three categories:

• actively removing carbon from the biosphere.

Each general approach has its merits and drawbacks. Specific technologies in each category are discussed later in the article.

Carbon capture and sequestration (CCS) is the process by which CO2 is captured and stored away from the atmosphere and oceans for a very long time. There are four basic elements to a CCS process: 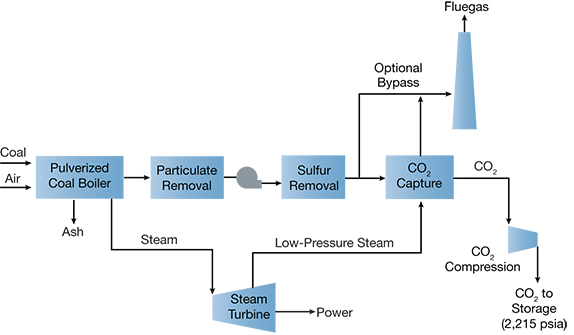 ▲ Figure 3. Carbon capture involves four basic steps, the first of which is capturing and separating the CO2, for example, from the fluegas of a coal-fired power plant. Source: National Energy Technology Laboratory.

Capture. Capturing CO2 from fluegas is the most energy-intensive and expensive step of a typical CCS process. Separating low-energy and stable CO2 molecules from a stream of mostly nitrogen is difficult. A small portion (< 2%) of large point sources produce concentrated streams containing up to 95% CO2, and for those capture is more efficient and cost-effective. But the overwhelming majority of large point sources emit CO2 at concentrations of 15% or less (5).

Several technologies exist for capturing CO2 from fluegas (6). The most common approaches are (Figure 4): 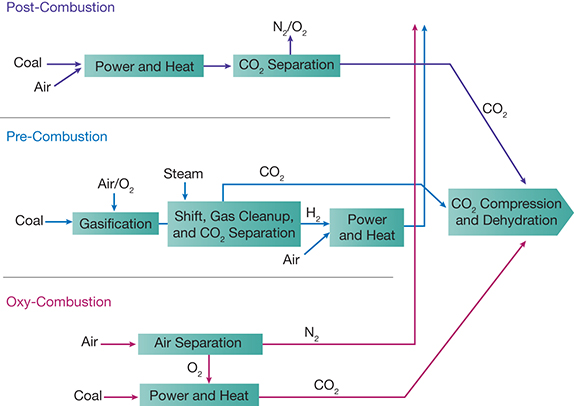 • absorption. In these systems, fluegas containing CO2 flows through an absorber, where it contacts a solvent that selectively absorbs the CO2. The CO2-rich solvent is regenerated and the CO2 is removed, generally by heating or reducing pressure. The CO2 can then be collected, purified, and compressed and the regenerated solvent recycled. The most common solvent in use today is an aqueous solution of monoethanoamine (MEA) (6). The major costs associated with this method are for the energy required to move fluegas through the contactor and to heat the solvent for regeneration.

• membrane separation. Many groups are developing polymer membranes for CO2 separation. These efforts are driven in large part by the high energy consumption and operating costs of traditional MEA systems (7).

• pre-combustion capture. Pre-combustion capture of CO2 typically refers to the removal of CO2 from synthesis gas produced at an integrated gasification combined-cycle (IGCC) power plant before the gas is combusted to generate power. In IGCC power plants, coal is first gasified into a synthesis gas (a mixture of mainly hydrogen and carbon monoxide), which undergoes a water-gas shift reaction to convert CO and water to H2 and CO2. The gas is then cleaned and CO2 is separated from the hydrogen. Oxy­combustion is similar to pre-combustion capture except the coal is burned in the presence of oxygen and some fluegas, rather than in air; the nitrogen-free, oxygen-rich environment dramatically increases the concentration of CO2 in the exiting fluegas.

• physical capture by advanced materials. New materials that rely on physical, electrochemical, ionization, and other approaches to separate CO2 from dilute gas streams are under development. These materials rely on physical pores for adsorption, functionalized sites, cages and traps, or other mechanisms (8).

Air capture. Air capture, also referred to as direct air capture or atmospheric capture, is a process of directly separating CO2 from the atmosphere, typically at or near the earth’s surface (troposphere). Air capture may use methods similar to solvent absorption, and it faces similar challenges with respect to energy costs for moving air and regenerating solvents. The high costs are exacerbated in air capture systems because the...

Strike the Right Balance between Active and Passive Fire Protection

The short answer is yes. It is becoming clear that industrial biotechnology is moving from the lab to commercial production of high-value chemicals.

A look at the news gives an idea of what’s happening in bioprocessing around the world. Here, bio-based projects reported between October 2013 and October 2015 are sliced, diced, and brought to you in the form of numbers.

Industrial biotech is the third wave of modern biotechnology, and it promises to be the biggest wave — bigger than biopharma and agricultural biotech.

Applying cost models throughout the development of microbial strains and production processes can reduce the time and cost of commercializing new fermentation products.