The Young Professional Committee-Saudi Section (YPC-SAS) participated in the 2nd Ethylene Middle East Technology (EMET) Conference that was held in Bahrain (Oct 17-18, 2016). This participation is a continuation of the active presence of YPC-SAS in Industry-focused events in the GCC region with strategic aim of promoting membership and volunteering opportunities to young professionals.

EMET 2016 was an exceptional meeting for the ethylene industry, bringing together over 400 professionals representing around 100 enterprises and more than 40 nationalities. The conference addressed the challenges and opportunities in the globally-fast evolving Ethylene Industry with an overall theme of ‘Sustaining Ethylene Competitiveness through Solution Sharing’. Delegates got to share practical experiences, innovative ideas and strategies for reducing costs, maximizing return and creating value on issues related to planning, design, operation and maintenance.

YPC-SAS, in collaboration with the Saudi Arabian Section of AIChE, shared with conference delegates some of the success stories and achievements over the past two years. High level visitors included HE Shaikh Mohamed bin Khalifa Al Khalifa  - Minister of Oil of Kingdom of Bahrain, Mr. Antonio Pietri - President and CEO of AspenTech, Mr. Ziyad Labban – CEO of Sadara Chemical Company, and Ms. June Wispelwey – Executive Director of AIChE. Among the key highlights of YPC-SAS is the series of process modelling and simulation workshops that were sponsored by AspenTech and delivered to nearly 150 young professional engineers over the past year. During the conference, the AIChE-SAS board has honored AspenTech for their remarkable support and commitment to the success YPC-SAS mission. Fifteen volunteers from YPC-SAS and University of Bahrain ran the booth activities in the Conference Exhibition in a wonderful demonstration of youthful synergy and excitement.

Mr. Ziad S. Al-Labban, CEO of Sadara - a joint venture between Saudi Aramco and Dow Chemicals, strongly applauded the mission and vision of YPC-SAS for empowering the growing population of young professionals in industry. What’s more, Mr. Al-Labban has encapsulated his 30+ years of experience in few words for the young professionals: “Success is built on three pillars: teamwork, communication, and trust”. Mr. Al-Labban insisted that those three pillars are interdependent, much like the legs of a stool that will fall if either one is missing. He further encouraged YPs to “work together, share knowledge, and build your trust” to be successful.

Ms. June Wispelwey, Executive Director of AIChE, has applauded the achievements of YPC-SAS describing it as an “amazing” spinoff of the global AIChE YPC. Ms. Wispelwey has also emphasized the need for challenging YPs to develop soft leadership skills that complement their technical knowledge. She further stressed that soft skills are paramount for equipping YPs to be successful leaders of the not-so-far-away future.

Mr. Ahmad Al-Shaikh, Chairman of YPC-SAS and officer of AIChE-YPC, has reiterated the mission and vision of YPC-SAS to be an effective platform for empowering young professionals in the GCC region. In a televised interview with Bahrain TV channel, Mr. Al-Shaikh stated that YPC-SAS seeks to achieve its mission through bringing YPs together by organizing events for networking and knowledge-sharing.

It is worth noting that YPC-SAS has grown in membership to over 100 members, representing approximately 25% of AIChE-SAS members. YPC-SAS team has also recruited 25 officers earlier this year to support its activities. In the next two months, YPC-SAS will continue to organize Process Modelling and Simulation technical workshops in collaboration with AspenTech. In addition, YPC-SAS will participate in the upcoming Bottom of the Barrel Technology Conference (BBTC) in Bahrain, 26-27 October 2016. 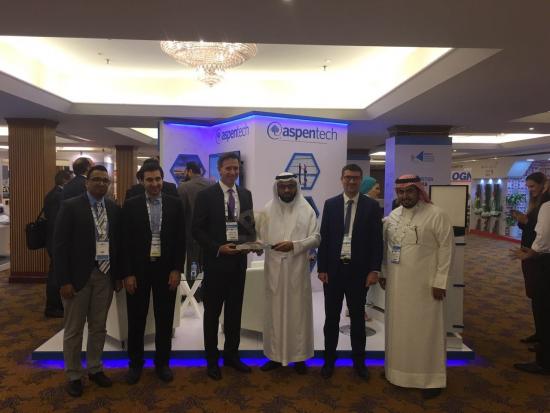 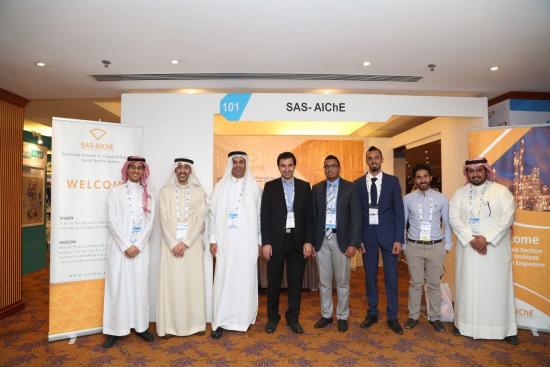 YPC-SAS team with Mr. Mohsen Al-Majnouni, Chairman of Saudi Section of AIChE during EMET 2016 in Bahrain 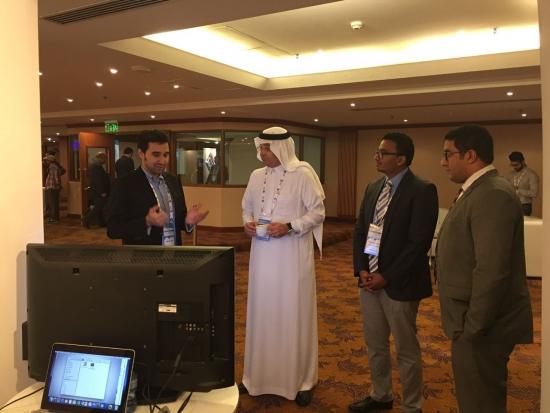 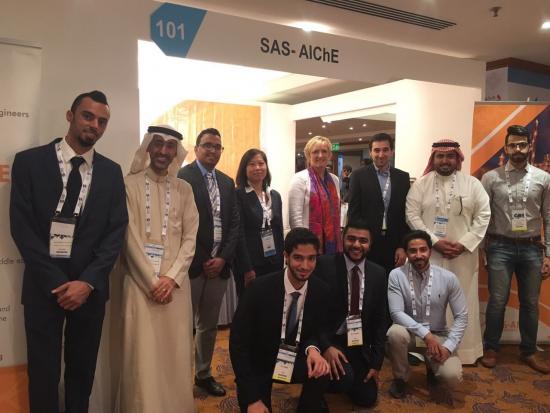