PAIC is tasked with:

PAIC consists of at least 15 and up to 20 members, who serve five-year terms. Members may only be re-nominated once, and therefore, serve a maximum of ten years. Members are selected to represent the broad membership, with at least one-third being current or former members of the Board of Directors and one-third chosen from various Institute entities.

PAIC, chartered in 2012, is a successor organization to the former Government Relations Committee.

Senate Testimony on Mission & Role of Chemical Safety Board (CSB) 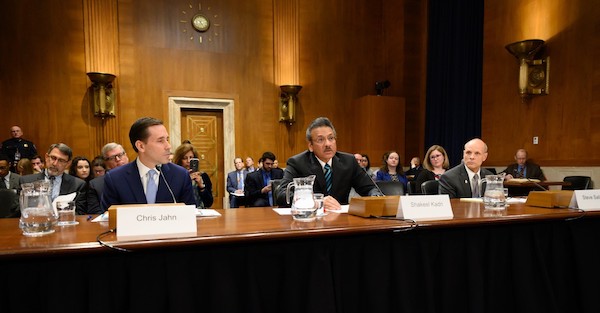 On Wednesday, January 29, Shakeel H. Kadri, Executive Director & CEO of AIChE's Center for Chemical Process Safety (CCPS)® testified before the Senate Committee on Environment & Public Works on the mission and role of the Chemical Safety Board (CSB).

The American Institute of Chemical Engineers (AIChE) has joined more than 125 scientific societies and journal publishers to urgently warn the Trump administration not to move forward with a rumored executive order that would make all papers produced by federally funded research immediately free to the public.

Recently, AIChE 2014 Past President Phil Westmoreland and two students from NC State University’s Department of Chemical and Biomolecular Engineering were interviewed by Time Warner Cable News about the University’s chemical engineering program and its role in solving fracking’s challenges and in helping the energy industry to continue to evolve.

Safe chemical processes and process operations are essential to the well-being of the workers who operate them, the communities in which they operate, the environment, and the organizations which own them.  Advancing methods and education for process safety is among AIChE’s highest priorities.

Each year, outstanding engineering students are selected to spend nine weeks in a special summer program to learn how government officials make decisions on complex technological issues and how engineers can contribute to legislative and regulatory policy decisions. PAIC coordinates AIChE’s participation in the WISE program, which is ranked one of the best internship opportunities in the U.S. by the  Princeton Review. For more information please visit: www.wise-intern.org