Recently, the federal government announced increased funding for five of the nation’s most promising COVID-19 vaccine candidates. Among the organizations selected is Moderna, a small biotechnology firm that began clinical trials of an mRNA-based coronavirus vaccine in March 2020.

The company successfully completed Phase 1 clinical trials in partnership with the National Institute for Allergy and Infectious Diseases (NIAD) in April. Since achieving that milestone, Moderna has become a symbol of hope and the recipient of intense scrutiny.

Founded in 2010 to accelerate the process of drug discovery, Moderna has since developed 20 mRNA-based drugs, half of which function as vaccines. Their technology relies on the central dogma of biology: DNA stores information that gets copied or transcribed into mRNA, an intermediary molecule that then translates the code into proteins — the building blocks of life.

Medicines produced by the biotechnology industry are usually synthetic proteins that have strong therapeutic value. Many vaccines rely on these manufactured proteins, or on deactivated versions of a virus, to invoke an immune response against a virus. 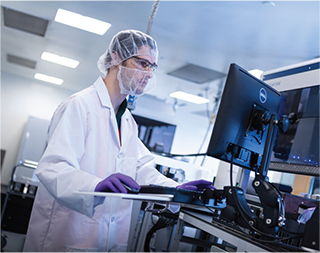 In contrast, Moderna’s technology introduces mRNA into the body, which prompts the body to make its own proteins to fight a virus, rather than inserting the proteins themselves. The company’s COVID-19 vaccine follows the same principle, introducing engineered mRNA to cells to induce the human body to create spike proteins native to the SARS-CoV-2 virus. 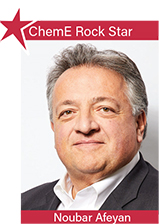 “The mRNA codes for a spike protein contained in the coronavirus,” says Noubar Afeyan, a chemical engineer and cofounder and chairman of Moderna. “When the cells start making this protein, the immune system of the person treated with the mRNA realizes that there’s a foreign protein present. The immune system then attacks this protein by creating antibodies and T cells to target it. Essentially, we train the cells to make anti-spike protein antibodies, which later come in handy if the actual coronavirus shows up. Thus, the patient is vaccinated.”

What sets Moderna apart from the other companies developing coronavirus vaccine candidates is its speedy method of drug discovery. In a recent AIChE Doing a World of Good Raj & Kamla Gupta podcast (aiche.org/giving/impact/stories/dr-bob-langer-and-ray-jordan-doing-world-good), Robert Langer, a Moderna cofounder and chemical engineer, explains that scientists in the past spent vast resources to make large amounts of proteins.

Moderna’s technology can produce mRNA much more quickly in smaller manufacturing plants, and the mRNA is injected into the body to make the necessary proteins. Rather than manufacturing in huge plants, the human body becomes the factory, Langer says.

The speed at which Moderna developed its coronavirus vaccine is unprecedented. Afeyan attributes the vaccine’s rapid development partly to the extraordinary collaboration that has become commonplace among the scientific community in the age of coronavirus.

Chinese researchers published the genetic sequence for SARS-CoV-2 in early January, and Moderna created mRNA constructs and brought them to human trials just 63 days later. In the wake of the pandemic, almost 200 vaccines are currently being researched and developed around the world. 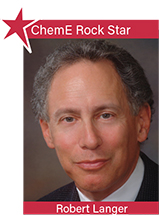 “When I look at scientists at Moderna and really all over, people just want to do whatever they can scientifically to make this go away,” says Langer. “I see tremendous efforts by all kinds of companies, in the pharmaceutical area and even in the sneaker industry, which is making masks. To me, it’s amazing how the scientific community has come together to do something important for the world.”

However, there have been concerns about the limited amount of data released, and Moderna’s subsequent announcement of a stock offering to help pay for further vaccine development. Media outlets and vaccine experts have questioned the company’s motivations for releasing preliminary data, as well as the actual implications of Moderna’s early clinical trials.

According to Afeyan, this is merely unfounded speculation. “It is quite common in this kind of trial to take an early sample for initial data, and then do the rest of the testing,” he says. “There are vaccine experts out there saying that the rest of the data must be bad, because if we had good data, we would have released it. This logic is completely flawed. We have no interest in hiding what we know, but at the same time, we cannot answer questions we don’t have the answers to just because people want to ask them.”

Afeyan also expressed concerns about the nature of skepticism coming from other scientists about Moderna’s vaccine. He welcomes the scrutiny that comes with being at the center of a pandemic, but asserts that there must be an equal burden of facts.“There are experts speculating about valid concerns, but they are posed as if the questioner knows something more than we do. The truth is, none of us know. We have to do the work to get the data to know.”

Moderna entered Phase 2 trials in June, where 25–100 patients all received the same dose. They plan to enter Phase 3 — testing several hundred patients — this month. If the trials meet the company’s safety and efficacy targets, the vaccine will then be evaluated for licensure by federal organizations. Multiple companies will likely need to produce COVID-19 vaccines, and Moderna anticipates being just one of many vaccine producers in the future.

Overall, the coronavirus pandemic has accelerated the urge for scientists to work hard to create solutions. And according to Afeyan, the need for a vaccine may persist over the years.“It would be great if COVID-19 just went away, but while it may diminish, the more likely course is that the virus will diminish and then surge again, and then repeat the same cycle. We will need vaccines every so often. I think this virus will exist with humans, and within humans, for quite a long time,” he says.