Antiviral drugs, along with vaccines, are important tools in the fight against COVID-19. While vaccines are preventive, anti-virals can help treat patients who have already contracted coronavirus.

Currently, Gilead’s Remdesivir is one of the most promising antiviral drugs for the treatment of COVID-19, the disease caused by the rapid spread of severe acute respiratory syndrome coronavirus 2 (SARS-CoV-2).

Although Remdesivir was recently authorized by the U.S. Food and Drug Administration (FDA) for emergency medical use, its benefits are not fully proven. Because of the emerging nature of SARS-CoV-2, it can be difficult to obtain a full understanding of the virus — and that has inhibited the development of new drugs.

Early information about the clinical manifestation of COVID-19 reveals that the virus can cause significant damage to the lungs and other organs, either directly or through immunological effects.

Acute respiratory distress syndrome (ARDS) is a common and deadly symptom of COVID-19, as is multiorgan failure — up to 75% of clinical patients suffer some sort of kidney stress, and a significant portion develop acute kidney injury. Recently, blood clotting has also been recorded in severe cases.

The gravity of COVID-19 has created an influx of solutions, whether they are therapeutic or preventive. Researchers at Boston Univ. (BU) and the Univ. of California, San Diego (UCSD) have developed a novel antiviral treatment that uses cellular nanosponges to bind to SARS-CoV-2 and draw it away from human cells, thereby neutralizing the virus.

Upon binding to the receptors, the coronavirus can enter the cell and hijack cell machinery to replicate itself. Human white blood cells (macro-phages) also have CD147 receptors and play a significant role in spreading coronavirus in the body because of their frequent interactions with target cells in the lungs. 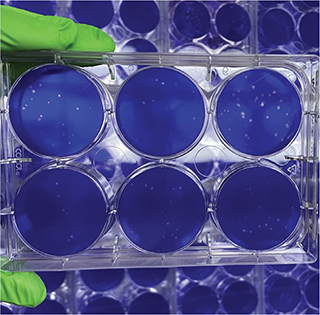 The new nanosponge treatment works on a simple premise: Nanosponges are coated with lung cells and macrophages that contain the ACE2 or CD147 receptors. Coronavirus cells are more strongly attracted to the receptors on the sponges than to real human target cells, so they become trapped in and on the sponge.

The researchers demonstrated that in the presence of the nanosponges, SARS-CoV-2 is inhibited from infecting human target cells and instead binds to the receptors present on the nanosponges.

To make the nanosponges, the BU and UCSD scientists used sonification to create poly(lactic-co-glycolic acid) (PLGA) nanoparticles. They coated these nanoparticles with a membrane containing either human lung epithelial cells or macrophages to create epithelial-NS and MΦ-NS nanosponges, respectively.

The team evaluated the nanosponges in live mice. They inserted the particles directly into mice tracheas and found that they evoked no negative immune response and that there was no evidence of lesion formation or tissue damage within the mouse. They also monitored blood markers and blood cell counts and found them consistent with baseline levels.

To test the neutralization ability of the nanosponges and measure their ability to inhibit viral growth, the researchers used live SARS-CoV-2 amplified in Vero E6 cells, which are African green monkey kidney epithelial cells that contain both ACE2 and CD147 receptors.

The scientists created cell cultures of nanosponges mixed with the SARS-CoV-2 and let those incubate for two days. They found that cultures containing nanosponges had a lower viral count than control cultures with no nanosponges. And, as the concentration of nanosponges increased, the infectivity, which is measurable through viral count, decreased.

Although these results are promising, developing a treatment for COVID-19 is fraught with challenges. Since the first case was reported at the end of 2019, the virus has been mutating rapidly. This generally presents issues for the development of therapeutics, but the BU researchers say that their technology is free from the effects of rapid mutation. According to the team, as long as the target of the virus remains the identified host cell, i.e., lung cells, the nanosponges should be able to neutralize the infection. 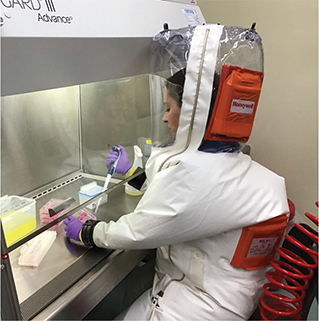 However, the scientists must still test their nanosponges in vivo, first in animals and eventually in humans. They plan to administer the treatment through nasal spray, and foresee its use not as a vaccine, but as a way to treat infected patients.

The nanosponges also have the potential to treat other infectious diseases, much to the researchers’ excitement. “The beauty of the nanosponges lies in their lack of specificity for any particular virus,” says Anthony Griffiths, a researcher at BU’s National Emerging Infectious Diseases Laboratories (NEIDL). “Conceptually, this should be a very simple way to generate a broad-spectrum antiviral agent. In other words, the same nanosponge could protect against various viruses.”